FC Dallas head into another must win game and it seems USMNT players can't stop scoring hat tricks. Not a bad problem to have!

It's been a weird weekend of soccer already with Philly pulling the upset win against Sporting Kansas City and both Manchester teams taking losses today from lesser teams. Can FC Dallas pull out a huge win against the red hot Columbus Crew tomorrow to stay alive in the playoff race?

As we all know FC Dallas is in dire need of players to step up and really push this team into the ever faster approaching playoff picture. One of the real bright spots for the Hoops lately has been the emergence of, arguably, the best Homegrown player that the team has seen in Kellyn Acosta. FC Dallas beat reporter Matt Barbour has a great story up at FCDallas.com about the rise of Acosta and how he's made the right back spot his to lose.

Acosta understands that he was originally moved into the starting 11 as a result of an injury to incumbent Zach Loyd. He says he’s grateful for the minutes he’s been getting and feels he’s adjusted well to the speed and physicality of MLS play, but he also knows that he’ll have to work hard in training and continue to perform in games to maintain his starting status over the veteran Loyd.

"It’s going to have us both working really hard," Acosta told MLSsoccer.com. "Zach’s a really good player, so it’s really tough on me. I just try to do the best I can in practice and prove to coach that I belong."

Acosta has been a revelation for FC Dallas and is without question the right back of the future. With Loyd's contract expiring at the end of the year you have to wonder if we'll see him back in Hoops next season. Don't be surprised if Acosta is the teams starter next year.

Tomorrow's game against The Crew is Hispanic Heritage Night at Toyota Stadium Presented by Taco Bell. (I really with I was making the Taco Bell sponsorship up but alas I am not....) In honor of Hispanic Heritage Night FCD has featured some of their Hispanic players this week on the web site and Facebook page. Blas Perez sat down and talked about his love of his home country and what it means to him to see Panamanian flags at games all over the country.

FC Dallas Goalkeeper and MLS All-Star Raul Fernandez did a Facebook chat yesterday on the official FCD Facebook page. You can see the version with both English and Spanish here. 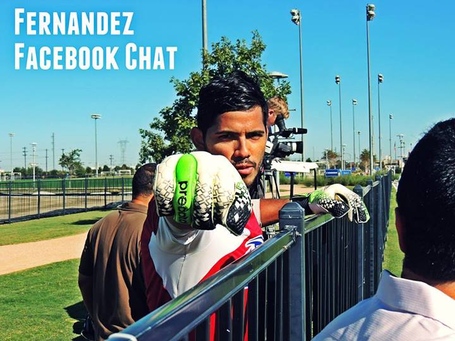 Not only is tomorrow's game Hispanic Heritage Night but at half time attendees will be treated to a half time show! Beyonce you ask? Black Eyed Peas? A Harvey Danger reunion show?!?! Oh no my friends it's much better than that! It's dogs playing soccer!!!

The Beneful Golazo Challenge will be featured not only tomorrow but the game on October 12th against the Chicago Fire as well. I know you're all incredibly excited about this. Sorry to get your hopes up about a possible Harvey Danger reunion. We'll all just have to keep dreaming. For those of you born in the 90's just ignore that joke and move on.

If you haven't gotten your tickets yet for Sunday's match head over to the FCD/Ticketmaster site and grab enough for the whole family. The match kicks off at 7:30 and will be broadcast on Time Warner Cable Sports.

Enemy At The Gates

Columbus head into Toyota Stadium tomorrow night with hopes of stealing three points on the road and keeping themselves in the Eastern Conference playoff picture.  The Crew have won 3 of their last 4 including a 3-0 win against the Chicago Fire last week that included goals from both of their main weapons up front in Frederico Higuain and, former FCD man, Dominic Oduro. In his weekly Know Your Enemy piece for  FCDallas.com, Drew Epperley notes how important Higuain is for the Black and Gold.

Federico Higuain vs Matt Hedges – Last week Hedges had the tough duty of dealing with Thierry Henry and Tim Cahill. This week won’t be any easier for the second-year defender as he goes up against Higuain. If he can put a body into the Argentine early like has done against the likes of Henry, and Camilo from Vancouver, it will go a long way in helping keep the Crew off the board.

Federico Higuain – The 2012 MLS Newcomer of the Year has made sure his first full season in the league has been a good one. The Crew attack lives and dies with Higuain. In just 40 regular season games, the Argentine has 15 goals and 15 assists. He does an excellent job of pulling defenders out of position to set up the attack. He also has an ability score a goal from anywhere on the pitch.

This is no easy win for FC Dallas and the back line better be prepared to deal with 2 of the hottest striker in MLS this season.

The injury list has been long lately. Andy Gruenebaum, Danny O'Rourke, Josh Williams, Federico Higuain, Dominic Oduro, and Tony Tchani have all shown up on the injury list or missed time recently.

Gruenebaum and O'Rourke's have been sidelined for long stretches and Williams is still working back after his second concussion of the season. They've obviously been held out, but it also appears interim head coach Brian Bliss is prone to give players suffering niggling injuries the day off.

Higuain, Oduro, and Tchani have been held out of practice or given the day off in recent weeks, but have come back to play that same week. Bliss and the rest of the technical and medical staff must now closely manage the fragile balance between sharpness and health.

A suddenly revived Tchani didn't practice on Wednesday as he picked up a torso injury according to Bliss in the Dispatch. Oduro was held out on Thursday, perhaps just to rest. Neither player is on the official MLS injury list and will likely play on Sunday against Dallas.

With the Crews recent run of form I would expect an invigorated group on the field tomorrow, especially with playoff implications hanging in the balance for both teams. This match up is sure to be a fun one to watch.

Also go check out the Golazo Match Preview and Game Feed up at MLSSoccer.com. These posts have some great information and stats in them including a look at these teams previous records against each other.

The last couple of matches in the CONCACAF World Cup Qualifying Hex are fast approaching. A few eligible US players around the world made some strong arguments to be included over the last week.

Forward Herculez Gomez scored a hat trick in just 25 minutes in his return to the field for Xolos in CONCACAF Champs League play on Thursday night. Pro Soccer Talk's Joe Prince-Wright has the full story and the video highlights.

On his return to action for Club Tijuana, the US national team striker smashed in a hat trick in his opening 45 minutes of play, to help the Xolos beat Victoria 6-0 and set up a potential top seed for the CONCACAF Champions League quarterfinals.

Gomez has been out of action since July 17, but came on at half time with Tijuana already 3-0 up to add some extra gloss to the scoreline.

The 31-year-old striker, who made the switch north from Santos Laguna over the summer, scored all his goals in 25 second half minutes to give USMNT head coach Jurgen Klinsmann a timely reminder that he is still around.

It will be interesting to see if Herc can have another successful season in Liga MX and make a strong case to be taken to Brazil next summer. What do you guys think?

But as Thomas Floyd writes at Goal.com, Herc will have to compete with young Icelandic-American striker Aron Johannsson, as he made his case on Wednesday with a hat trick of his own.

The 22-year-old striker notched a hat trick, including two goals in extra time, as AZ advanced Wednesday to the third round of the Dutch Cup with a 4-1 win over Sparta Rotterdam.

Johannsson, who has four goals in seven league games for AZ this season, open the scoring five minutes in, then broke the deadlock in the 91st minute before adding an insurance goal in the 105th minute.

Another young American who's name has been popping up about a possible USMNT future is Mexican-American player Paul Arriola, who's recent solid performances for Xolos have him on many people's radars. Kyle McCarthy has a great piece about Paul and the choices that many young mixed lineage American youngsters have to make when deciding about their playing future.

For a while, it looked like Arriola might follow the increasingly established path in then USA: succeed at a local club, transition to a MLS youth academy setup for greater opportunities and wait for a contract offer to leap into the professional game. He never completed it.

"I did have a chance to sign a homegrown contract with LA, but I decided that Tijuana was the best place for me," Arriola explained in an email. "The main influence was playing time. (LA Galaxy manager) Bruce Arena was very straightforward with me during preseason and had told me that if I had signed that I would most likely be looking at zero minutes with the first team for 2013, fighting for a spot on the reserves and getting minutes with the academy."

But unlike a lot of his peers, Arriola, 18, possessed a viable alternative close to his home. He didn't have to accept the Galaxy's offer. He could pursue his goals south of the border with the help of his Mexican lineage and a strong youth résumé that included three appearances for the U.S. at the 2011 FIFA Under-17 World Cup in Mexico. The Xolos invied him for a training spell and ended up tablling an offer for a place in their under-20 squad.

Arriola seems to have a bright future and we can only hope that means playing for the Red, White, and Blue.

As always thanks for stopping by Big D Soccer. Again if you haven't gotten your tickets to tomorrow's match (and really why haven't you?) head over to FCDallas.com and grab some!

Hope to see you all there!