This is some positive news coming out of Frisco today. Third Degree is reporting that this morning at training, the stadium video boards were lit up with a logo that could suggest a stadium sponsor is on the way in for FC Dallas Stadium. 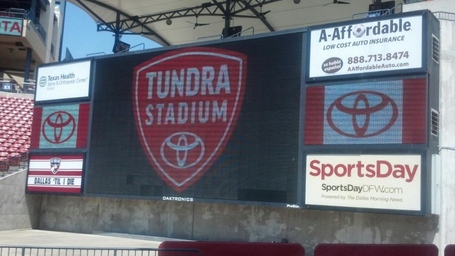 So not Toyota Stadium. But Tundra Stadium. Some suits were in town to likely discuss the partnership. I'll probably still be calling it Pizza Hut Park for years to come anyways. 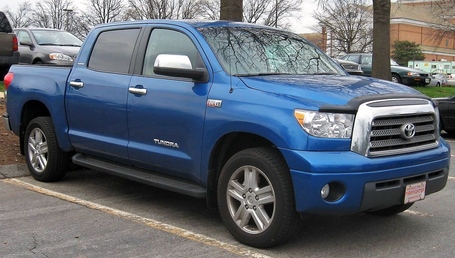 Yeah, naming a stadium after an object isn't unheard of that often but it is surprising. Toyota is likely pushing the Tundra to the public and given how Toyota already has a relationship with MLS, it isn't that shocking to see them go for another stadium sponsorship in the league. Currently they are the stadium sponsor of the Chicago Fire's stadium, Toyota Park. Toyota has naming rights to that stadium through 2016 as they signed a 10-year deal with the Fire back when the stadium opened in 2006.

FC Dallas has been looking for a stadium sponsor since January of 2012 when Pizza Hut pulled out of their sponsorship deal with the club. I'm curious to see how many other brands will be brought in here to tour the facility and potentially see their name on the video board like Toyota did today.

Big D Soccer is tracking this story and will keep you up to date on any news that comes from it.