Well obviously the biggest news of the day is that after 5 and a half years coach Schellas Hyndman will be leaving at the end of the year. That said, lets take a look at the other goings on around FC Dallas and the US National Teams.

FC Dallas dropped 3 points and the Brimstone Cup at home last weekend to Mike Magee and the Chicago Fire despite Kenny Cooper's best efforts to bring FCD back level. Goal.com has the full match breakdown.

The Chicago Fire sprinted out to a big lead but had to ride out a late FC Dallas fightback to win 3-2, a result that eliminates Dallas from playoff contention.

Chicago (13-12-7) goes to fifth in the East with the win, tied with fourth-place Montreal and sixth-place Philadelphia on 46 points but ahead of the Union via the wins tiebreaker. Dallas (10-11-11) is mathematically eliminated from the playoffs with two games remaining.

It was a tough pill to swallow but not a shocking result to anyone who has followed this team over the course of this season.

Kenny Cooper's two goals in the match propelled him into the MLS Team of the Week for week 33 (coincidence? I think not.)

Here's a look at his first goal of the night. The only one from the run of play.

In addition both Kenny and Fabian Castillo made the Castrol Index Weekly Top 20. Fabian was #9 on the list with Kenny coming in at #19. Congrats to them both.

On Monday the Hunt family held a press conference before the Season Ticket Holder Event at the Perot Museum in Dallas for a big announcement. Daniel Robertson has the story.

Monday, October 14 was a special day for the Hunt Family, Perot Museum of Nature and Science and City of Dallas as it was announced the sports-themed gallery will now be named the Lamar Hunt Family Sports Hall.

"We know that Mr. Hunt was curious, inventive and fun-loving, and those qualities align perfectly with the museum’s mission of inspiring minds through nature and science," said Perot Museum Board Chair Carolyn Perot Rathjen. "Our hope is that the Lamar Hunt Family Sports Hall will not only inspire learning about the sciences, but represent the important lessons that sports teach."

If you got a chance to go to the event on Monday night it was a blast. A beautiful and interactive museum such as the Perot is a worthy place to put the Lamar Hunt name up.

FC Dallas will be hosting another fan driven event before Saturday's afternoon game. The club has announced that before the final home game of the season on Saturday, they will be having Fan Appreciation Day. Scott Brown at FCDallas.com has the full rundown of the days festivities. 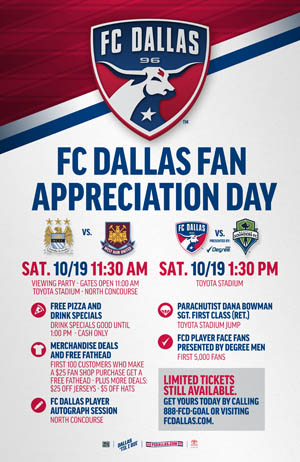 Make sure to check out the really cool video that MLSSoccer.com has put together about Generation Adidas players in their rookie year that includes our own Walker Zimmerman.

Enemy At The Gate

As Seattle roll into Frisco for their only trip to North Texas of the season we take a look at the scouting reports from around the interwebs.

Drew Epperley has his weekly Know Your Enemy piece up at FCDallas.com, which takes a look at what Dallas has to do to have a successful game against the Sounders.

Seattle is still in the middle of a big playoff race and Supporters’ Shield race. Sigi Schmid’s club currently sits in a tie for third place in the Western Conference with 51 points. They are just two points back of the top spot in the league yet could still fail to qualify for the playoffs as well.

However, the Sounders are in a bit of a rut as of late, losing their last three games by a combined score of 10-2, including two games last week to rivals Vancouver and Portland.

Seattle has already won the previous two meetings with Dallas this season, both in the Emerald City. In May, Seattle won the first meeting 4-2 and then followed it up with a second win in August 3-0.

Lets just hope Dallas doesn't play that high line defense as they did in the previous two games against Seattle earlier this year. We'll just say that didn't work out so good for the Toros.

SoundersFC.com also have their own Scouting Report posted today.