MLS Fantasy Fisticuffs: Advice for Round 5

In the Round 4 Double Game Week, Ben scored a whopping 138 points, while Phil grabbed a respectable 118. Ben regains the lead with 364 total points to Phil’s 358.

Share All sharing options for: MLS Fantasy Fisticuffs: Advice for Round 5

Ben: Congratulations to me (top scorer of the week in the BigDSoccer league), me (1st place in the BigDSoccer), me (ahead of Phil now), and finally, a shout out to me for taking the lead in the FC Dallas league and moving up to 6th overall in the global rankings. On a less self-aggrandizing note, 15% of our league are in the top 1% of all entries, and over half of that group is in the Top 100. Bang up job, gang - let's keep it rolling!

Phil: At the halfway point of the DGW, Ben and I were tied for first in the FC Dallas league. Big D Soccer obviously picked the right fantasy advisors! Fantasy Fisticuffs has become a back-and-forth heavyweight bout that is headed for the later rounds.

Usually when you score 118 points in a week, you can't complain. But my rival managed the 9th highest score in the game! The competition in the Big D Soccer League is fierce, as I actually got a red arrow and fell from 2nd to 4th. I'm not too concerned, however, as all other arrows were green (except for the Beer Guardians and American Soccer Analysis leagues where I was already in first).

Ben: Bringing 3 transfers into the round and being set up from Round 1 with this unique DGW in mind, I was set up for a big week. On top of having 8 players who would go on to play 15 games in Round 4, I was able to add Michael Barrios (M-$8.1) and Chris Tierney (D-$8.1) who both ended up on the dream team and both have home games this week. My other transfer in Fabian Espindola (F-$9.9) would have also made the dream team if it were not for Chris Seitz (G-$4.7) denying him from the spot. Overall, the net on transfers in totaled 26 points, so I'm pretty good with my early season plan.

Ben: Going into this round, you've probably got Mauro Diaz (M-$10.6), and Jon Arnold's report from practice seems to be promising. He's expected to play.

If you have Pedro Morales (M-$10.9), however, it looks considerably more pessimistic; you're going to have to replace him. I (and I'm pretty sure Phil) had Kaka (M-$10.7) to start the season, but I'll probably wait a while to add him since 2 out of his next 3 games (and 4 out of his next 6) are on the road.

Phil: You've gotta have Diaz and Diego Valeri (M-$10.4) in your midfield, so start with those if you don't already have them. I'm leaning toward replacing Porales with Ignacio Piatti (M-$10.4), but he doesn't have a double game week (DGW) until Round 8.

There just aren't many compelling matchups this week. I'd rather plan ahead for the Round 6 and 8 double game weeks.

Ben: There's 6 teams playing 2 games next round, so let's take a look at a couple of those and check out the rest next week.

Phil: I'll kick it off with Sporting Kansas City. Another potential Porales replacement, Benny Feilhaber (M-$11.0), is back in the Sporting KC lineup, but playing deeper than usual and off of corner and FK duty. There's no way he's coming close to last year's numbers. A sneaky SKC pickup is Soni Mustivar (M-$7.5), who has been consistent, earning 6, 5, 4, and 5 points from defensive mid. But it feels wrong to put a D-mid in my fantasy team. Maybe it's that I play attacking mid, or that #10s are my favorite players, or just the history of defensive midfielders being historically worthless in MLS fantasy, but I'm not stooping to put a D-mid on my team. BREAKING NEWS - Mustivar is OUT this weekend. Wait until next week at least.

I'm also in need of a Walker Zimmerman (D-$6.1) replacement, as he appears to be getting rotated with Zach Loyd (D-$7.6). Looking at the SKC backline, Amadou Dia (D-$6.0) is the right price, but is not a lock to play every week. Chance Myers (D-$6.5) is a popular pick, but has zero bonus points so far this year. Matt Besler (D-$8.7) has still not passed concussion protocol. Nuno Coelho (D-$7.8) is a lock to play, gets bonus points, and even scored a goal, so he's my pick of the litter, although they play away at NYRB this week.

Ben: New York Red Bulls are the only team besides Dallas with a home game this week leading into their DGW next week. They also have arguably the worst DGW schedule next week with potentially dull road games against Colorado and San Jose which look like they might be a suitable substitute for Ambien. Pair that with the fact that their defense is a mess, and recommending Red Bulls at the moment seems like borderline malpractice this week.

WARNING: NEXT RECOMMENDATION IS NOT FOR EVERYONE.

Sacha Kljestan (M-$11.2) is New York's leading scorer and will be a hot pickup to replace Porales. That said, more than half his points from this season came from the Houston game. The other 3 games have ranged from average to bad, and if the ball gets passed to Bradley Wright-Phillips (F-$10.8) for PK's, you could be looking at a small haul from a premium player.

I've about halfway talked myself into Sean Davis (M-$6.0) this week as a wild differential play for this round and the next. Davis is one of Red Bulls' more touted Homegrown Players whose most famous moment to date was putting 2 past Chelsea in an exhibition win last summer. He'll get the start for Felipe this weekend, and he did manage to pick up 2 attacking bonus points in the last 24 minutes of the game against New England (while Red Bulls were down a man). Even without a goal or assist, he should be good for 3-5 points at a lower price than most defensive midfielders with a similar floor.

At a minimum, he'll get some playing time during the next round as well, and if you're feeling crafty you can play a 2 match switcheroo with him (more on that in a bit) before you swap him out for a New England or Vancouver player you still have after Round 4. The better to best case scenario is a cheap player taking his opportunity and usurping Felipe's place in the Red Bulls first choice XI. I can't stress enough that this is kind of a riverboat gambler play, so if you're risk-averse, these aren't the droids you're looking for.

Phil: Is Sebastian Giovinco (F-$11.8) still worth the premium price? Toronto FC's defense sure is improved, but the offense is Gio and Gio alone. Gilligan at least had friends on his island. I'm dropping him to free up some cash to replace Zimmerman and Porales and afford a few DGW players in Rounds 6 and 8. I'll look to pick him back up by Round 11 when he is at home for a double game week.

Ben: A small portion of my lead over Phil is due to the judicious use of the ‘Switcheroo'. Like I said previously, you get to see what Sean Davis does after 2 games before executing the switch if you have leftover players from Vancouver and New England (both only play once next round, and after RBNY kicks off their 2nd match). Here's a demonstration of how I did it in Round 1. 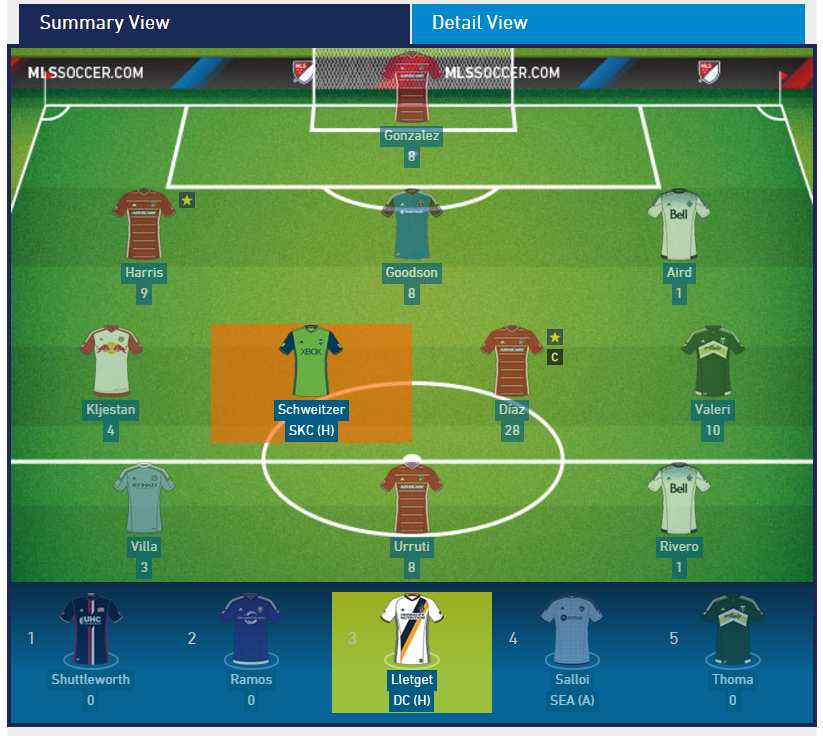 For my lineup in Round 1, I intentionally placed Schweitzer in the match with the confidence he would not play for Seattle. For this to work, Schweitzer can't play (one of the risks) but since he didn't, Ramos was slated to be the first sub off the bench to replace him. This would switch me from a 3-4-3 to a 4-3-3, but since that's a legit formation, it isn't a problem. If your sacrificial lamb is a defender here, then it won't work getting Lleget in the game because 2 defenders isn't a legal formation. You'll be toast. 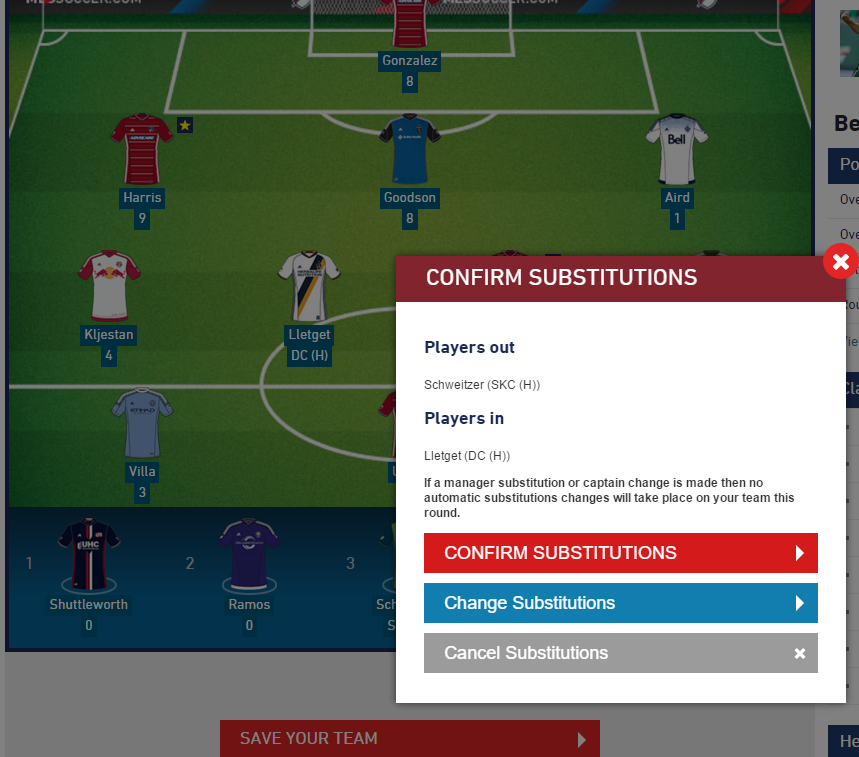 Another key component of the lamb is that his team plays late. If you try to pull this slick move, and his team has already played this week, it won't work. In this scenario, Schweitzer played later than both Ramos and Lleget. Generally speaking, West Coast lambs are your best bet because of scheduling (Western Conference, more games during Pacific time, more nationally televised games on Sunday).

Ramos finished with 3 points which was pretty underwhelming. In a later match, I saw that Lleget was starting for LA (which wasn't certain because of Boateng), I toggled to manager's subs and inserted him for Schweitzer. Had I not, Ramos would have been subbed into the game at the end of the week automatically for 3. Lleget finished with 7 in LA's opener, and a net of 4 points was all mine.

The last words of warning on this little tactic is that if you have a surprise player not show up due to injury, you don't want to use this trick. You won't be able to let a normal autosub take his place, and that will quickly eat into the advantage of the switcheroo. Also, I've had difficulty making the manager sub switch work on Firefox and Explorer browsers. If you're going to make this a reliable piece of your repertoire, you probably want to install Chrome browser. If (and I do mean if) I pick up Davis this week, he'll be player one on the bench for Round 6. This makes his risk next round a little more palatable, and this is really the best way to use the switcheroo.