Scratching the Chalkboard: In Papi We Trust

Share All sharing options for: Scratching the Chalkboard: In Papi We Trust

From the looks of Twitter last night, the feelings of FC Dallas starting five homegrown players in one game - with another on the bench - was met with mixed reaction. There were those who looked and thought Dallas would be annihilated with that lineup, as the kids weren't going to be ready, to those who were excited about what we'll get to see from the kids.  Some fell cautiously in the middle; excited about the seeing the kids get a chance but reserved with their outlook for the match.

It's well documented in his three plus years as a head coach, Oscar Pareja is a master of developing young talent and bringing them up to MLS level quality faster than many coaches out there. We've also covered on this site that given the time to prepare, Pareja will more often than not, have his players prepped and ready to go, regardless of experience or former pedigree. (See 2014: Victor Ulloa, Danny Garcia and Moises Hernandez' first starts.) On top of which, I've also stated that it is very rare that "Papi" gets out coached on any given weekend. Many of us, myself included, may not understand or agree with what he rolls out there (five man defensive line??) but his track record has shown that he doesn't just haphazardly go about his game plan and just coach out of reaction. In fact, he does quite the opposite, ensuring that everyone in the 18 know exactly what they're supposed to do in any given situation. Of course, it doesn't always work out and sometimes it's definitely not aesthetically pleasing to the eye, but the results speak for themselves, especially last night's 3-0 thrashing of the Columbus Crew.

The Dallas midfield didn't dazzle and wow the crowd, at least not in terms of dominating possession or over running the Crew midfield. Instead, the kids did what Papi instructed them to do; take a deep breath, keep everything in front of you and make sure you give Michael Barrios space. 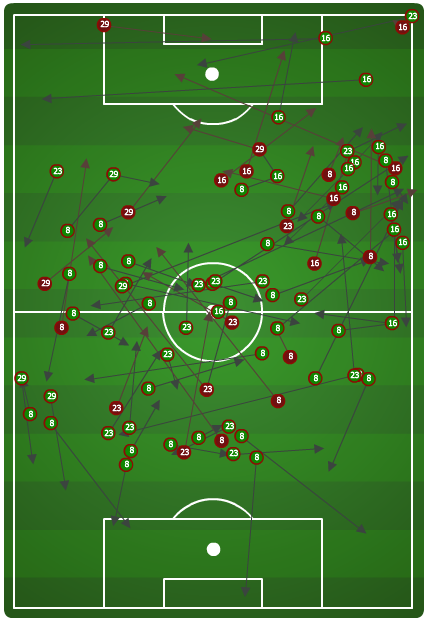 There's not much here statistically: 61/83 73% passing with three key passes. Kellyn Acosta and Victor Ulloa did the usual dirty work of staying back and distributing. Alex Zendejas was instructed to cut in when he could in support of Barrios and David Texeira and Coy Craft was given the license to take the ball to the end line and whip in crosses. All executed it perfectly without ever compromising their defensive shape and responsibilities.

When you're on the road with your team needing points and it's either your first career start or it's been a few months since, it's easy to be over eager and let youthful exuberance take over and let those emotions take you out of your tactical assignments. From the look of how they kept their shape and carefully picked their spots to counter, it looks like Papi prepped them just fine and the kids delivered the goods as we all hoped.

This one caught me by surprise, but when the team went full on bunker and counter mode, this made the most sense. I was initially getting really nervous when Dallas' midfield and defensive lines were holding their blocks so deep, basically just inviting the Crew to carry the ball into the attacking third without any pressure, but it became really evident (especially on Barrios' goal) what Dallas was trying to do and letting Barrios fly 1v1 against the Crew defense. 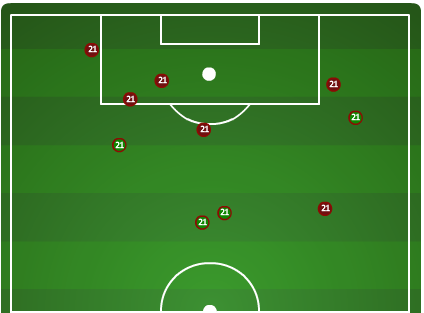 What we're looking at are the number of times Barrios took a defender on, either successfully, unsuccessfully or won a foul. These are the types of figures that will make any coach playing the counter game smile. This was also a result of the Crew being tactically careless as it's obvious that Dallas was going to break and do it through one player (Barrios). The Crew kept pressing forward and forward and forward as Dallas' lines dropped deeper and deeper and they were caught in the trap which led to this mess from the Crew defense:

Credit to Barrios for finishing that off, but what were the Crew defenders doing having that much space between them against the fastest guy on the field? And what was Tyson Wahl doing trailing the run and running towards the ball carrier instead of covering the middle? Parkhurst had that angle completely covered and Barrios would have to run through Parkhurst to get into the space that Wahl was covering. Really careless, silly tactical awareness from the Crew defense which happens when your side has the ball so much and your mind switches off for a few seconds on who you're supposed to cover.

FC Dallas doesn't have those big name DPs like other clubs, but we do have a coach who is revered for his ability to cultivate young talent and a roster full of HGPs and players who are barely legal to drink. At this stage, let's enjoy watching Pareja do what he does best. He hasn't proven us wrong yet.