Who should start for FC Dallas this weekend against Real Salt Lake?

With Michel returning and Blas Perez out on international duty, who does Oscar Pareja turn to?

Share All sharing options for: Who should start for FC Dallas this weekend against Real Salt Lake?

FC Dallas is getting set to take on Real Salt Lake for the third and final time in this regular season on Saturday. The two teams squared off just two weeks ago with the good guys coming out on top 2-1 in a wild affair that saw Blas Perez get red carded.

This weekend Perez will be out yet again after serving his suspension last weekend. The veteran forward will be with his national side as they compete in Copa Centroamericana.

So who will Oscar Pareja turn to this weekend as the club goes to Utah? Here is how I see it possibly laying out: 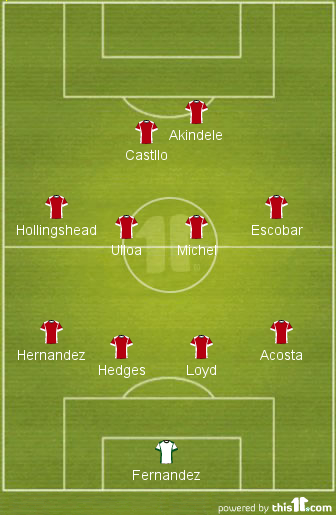 We should expect a few changes this weekend from last weekend's 1-0 loss in Chicago. The first is getting Michel back in the lineup. I think having his set piece ability is something Pareja knows is vital, especially against a team that they recently scored on with a set piece (Je-Vaughn Watson's goal against RSL off a corner kick).

Bringing Michel back in means that likely Kellyn Acosta will be moved out of the midfield. While I know some are hoping to see that more, I think getting him in at right back is probably the best thing to do for the rest of the season. That also means having Watson as an option on the bench for either Acosta or Ryan Hollinsghead, who I think has earned another start.

Another change I have is placing Moises Hernandez back in the defense for Jair Benitez. This may happen, or it may continue to be the same back four - with Zach Loyd and Matt Hedges in the middle - that we've seen these last few weeks. Hard to guess really considering we haven't seen this team come off a regular season loss since May.

What do you think the lineup will be this weekend? Post yours in the comments below.