Scratching the Chalkboard: Another Attacking Duo

Share All sharing options for: Scratching the Chalkboard: Another Attacking Duo

I've continued to mention it here how time and time again I'm so impressed by how Oscar Pareja has gotten this team playing at such a high level using multiple formations and tactics. First we saw the team excel using a 4-2-3-1 or a 4-4-1-1 (however you want to call it) with play running through the middle with Mauro Diaz. Once Diaz got injured, there was the attempt to replace him with a like for like player in Danny Garcia. Obviously the two are not in the same level, but they are similar in their playing styles. Unfortunately the Garcia experiment didn't work out and Dallas went with a 4-4-2 formation focusing on wing play from Fabian Castillo and inserting rookie Tesho Akindele to help Blas Perez in the attack.

Last week, again with the roster littered with more injuries and Tesho Akindele needing a rest, Pareja went back to the almost forgotten David Texeira - who at this point just owns the Sounders (3 goals in 2 matches). Obviously Texeira and Akindele are not like for like players. Both provide their own attributes and skill set, so how did Texeira fair in his first start since April? Let's dive in.

This has to be by design, but David Texeira very, very rarely drifts out wide for any reason. I'm too busy to pull up the heat maps from his previous games, but if memory serves me correctly Texeira primarily stays central and occupies the opposing center backs. 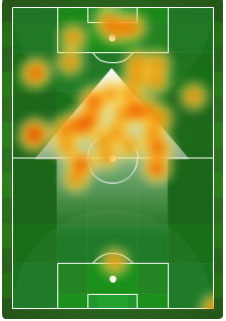 This does explain why it seems like Texeira often goes missing for large chunks of the game. It's a thankless job to try to occupy two center backs as it means you will rarely get the ball played to you and your primary assignment is to just act as more of a decoy for your team. Given that Texeira has hardly lit up the league, I don't quite understand why teams mark him so carefully and give up space to the other FC Dallas attackers, but perhaps his two goal output was exactly what teams were afraid of.

Naturally by design, if Texeira is occupying the center backs, then this will free Blas Perez to drop a little deeper into space and see the ball more. Interestingly enough Perez played in sort of a hybrid target attacking mid role, with his back to goal. It was pretty fun to watch as his hold up play is already the strongest on the team and by doing it a little deeper it allows and forces his teammates to be part of the build up. 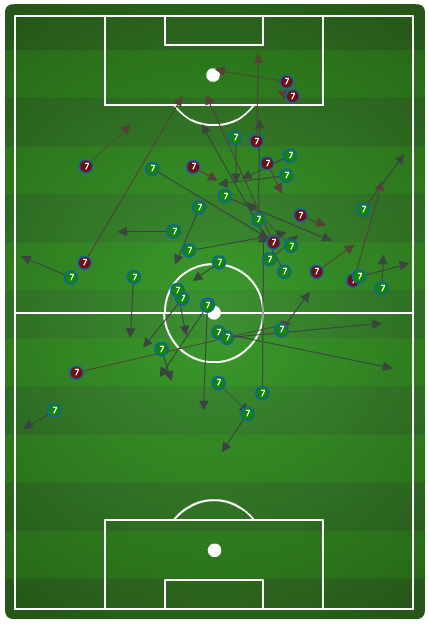 Imagine for a second that I was able to change the #7 on these and slotted in #10 (Mauro Diaz). You probably wouldn't have blinked or second guessed passing chart based on the volume of passes and how spread across the field the passes were coming from.

Maybe both? As good as the striking pair did against the Sounders last week in terms of their movement and passing, the bottom line is always about goals. The Dallas forwards did manage to put in three past Seattle's Stefan Frei but the graphic below is a little concerning.

These are all the shots that Perez and Texeira managed to put together for the entire game. Thankfully they went three for three and buried all their chances and half chances, but it is not a sustainable rate by any means. I will admit that I'm nitpicking, but I'd be much more comforted seeing several more shots being registered here as it shows that they were able to create chances too.

Obviously this isn't a bad thing and if nothing else, continues to highlight just how good Oscar Pareja has been handling this team with its mountain of injuries. This also gives Dallas more flexibility and creative looks as a whole during this final stretch for the playoffs, making them more unpredictable and teams having to manage on the fly when forced to defend multiple looks and different forms of attack.