Pareja continues to work his magic with the youth

Share All sharing options for: Scratching the Chalkboard: Homegrown Midfield

The Kellyn Acosta-Victor Ulloa pairing was something many of us were pining for once Ulloa established himself as a starter and Zach Loyd was reclaiming that starting right back spot. Well this past Saturday we finally got to see what we were asking for: two starting homegrowns right in the middle of the park. I am not certain, but that pairing may have been MLS' first ever center mid homegrown pairing. (Colorado and Chicago may have had the first, but I'll have to do some digging to confirm.) And while their performance wasn't mind blowing against the Chicago Fire, it was certainly solid and something to build on.

Neither Ulloa or Acosta provide any kind of nasty bite in their style of play, but that may be a good thing as neither of them conceded a foul against the Fire. Not that fouls are necessarily bad and sometimes professional fouls can be incredibly useful, but it speaks volumes to their positioning and tactical awareness as you only professionally foul your opponent because they got a step on you. 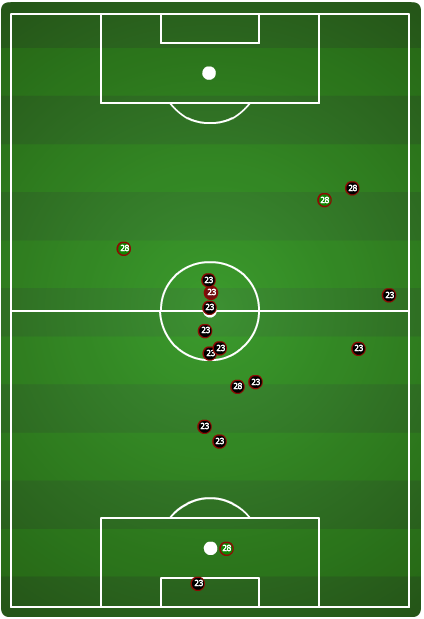 I am only focusing on the 66 minutes that the pair played together in the holding mid spots - Acosta went to right back after Peter Luccin came on at the 66 minute mark. That's 2 tackles won, 1 block, 5 interceptions, 1 clearance and 7 recoveries combined. The fact that most of the defensive events occurred very centrally that points to the defense covering their marks well and not forcing either Ulloa or Acosta to stretch out across the field to cover.

Acosta's 5 interceptions was very impressive (although that's a little padded as one was a headed interception which are relatively easier to pull off). It's a testimony of Oscar Pareja's good use of Ulloa's tactical discipline and awareness to cover space and the unleashing of Acosta's speed and athleticism to pick passes off. Bottom line, Pareja did a good job of highlighting both of their strengths. 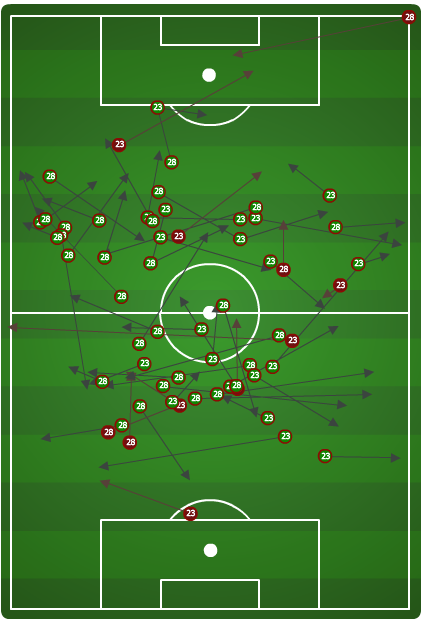 49/60 passing. 82% completion rate. 1 successful flick on. 2 key passes. (Again I'm just counting the first 66 minutes.) And only one dispossession from Ulloa which is incredibly uncharacteristic from him in the 29th minute. When a team starts two really young and inexperienced center midfielders, you press them hard to create turnovers. Thankfully, Ulloa is incredibly calm and comfortable on the ball and Acosta is no slouch either. Both players protected the ball well and circulated it appropriately to keep possession and move the attack along.

I'm not sure if Kellyn Acosta will be transitioned full time to the center mid position or not, I actually think he has a higher ceiling at RB, but this pairing showed glimpses of what it can be a year or two down in the future: strong, composed, unflappable, and tidy. It's incredible to think that Victor Ulloa's emergence essentially shipped former captain Andrew Jacobson to NYCFC even though the team had lost Hendry Thomas for the year. Both Acosta and Ulloa are ahead of Luccin and maybe even Adam Moffat. This isn't a knock against the veterans who have had their moments, but a testament of just how good the homegrowns have become under Papi in such a short period of time. At this rate and also what's in the pipeline, it would not surprise me or anyone in the least if FC Dallas became the first team to ever field a starting lineup made up entirely of homegrown players in the next 5 years.