Scratching the Chalkboard: Pass It Wide

More dominant play from the Hoops along the wings

Share All sharing options for: Scratching the Chalkboard: Pass It Wide

There are just so many combinations and ways that this team can play that makes my head spin a little. No Mauro Diaz, no Fabian Castillo, no problem. Let's start David Texeira over Rookie of the Year candidate Tesho Akindele? Yes. No one would ever make that call. That is unless you're Oscar Pareja who ,according to our own Mo Bushnaq, is a magician.

Oscar Pareja is a magician. That is all. #FCDallas

It is absolutely mind boggling how this team prepared for Seattle on such short notice to deliver a 3-1 victory and securing a vital three points. Oscar Pareja is just that good. He finally, finally, finally got Andres Escobar to play like the highest earner on the team to actually play like one and somehow even got a relatively makeshift back line to contain a potent Seattle attack. That being said, Oscar Pareja got his team to do what it does best: play down the flanks.  We'll took at how Dallas did controlling the game from the right side of the field.

I'm only comparing the two based on the fact that both started out as wide midfielders and have found incredible success converting into outside backs. We've discussed this a little here, but it's starting to look that Je-Vaughn Watson's best position here on out is at the right back position. 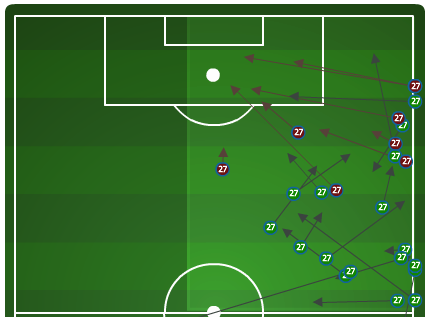 Watson had a solid 17/25 passing night in the attacking half. This includes throw ins. Which coincidentally, of his 8 missed passes, 2 were throw ins into the penalty box, 3 were chipped passes into the box and 1 was a headed pass. Not bad at all. 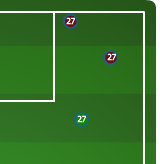 These are his take ons in the attacking half. He was 2/4 on the night, just FYI. I love that Watson got into such deep positions and took defenders on. No, he wasn't successful on half of them, but those are exactly the positions you want your attacker to attempt a high risk, high reward move.

If and when all the players are healthy, I don't think Watson is a starter in this group. But, he certainly is an excellent player to have who can fill in multiple positions and do quite well when called upon.

We were starting to see glimpses of his true abilities when he hiked up those shorts, exposing those trunk thighs of his. But last night finally gave the fans what Oscar Pareja saw in this player and why he went out to get him on loan from Dynamo Kyiv. 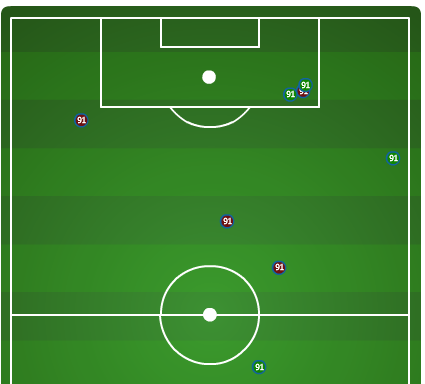 That's 4/8 take ons from Escobar, with three attempts (2 successful) inside the penalty area. Truth to be told, this was the kind of player I was expecting when FC Dallas picked him up on loan. I will fully admit that that assumption was based entirely off Youtube highlight clips, but he looked fast and looked like he had the ability to take players on. It was a very simple night of one move and go, and not trying to do too much when on the ball. And it was Escobar's run down the Sounders defense that led to him assisting on the game winning goal from David Texeira. 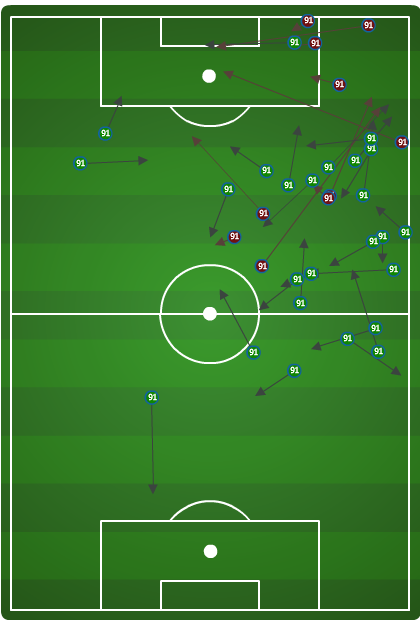 25/35 passing. 5 of his 10 missed passes were unsuccessful crosses into the penalty area. The downside is that he only connected two passes into the box, but the obvious upside is that those passes found a certain Uruguayan for two of the night's three goals.

On top of keeping his dribbling simple, Escobar kept his passing simple too, opting more for the shorter passes to keep possession going. Outside of that backpass, Escobar didn't complete a single pass beyond 15 yards. So credit to him for keeping them shorter and relying more on his movement to break down the Sounders defense.

Hard to write these without at least mentioning the guy who scored a brace, including the game winner. So hats off to David Texeira for making his contribution to the team, and for also shedding this ridiculous hairdo. 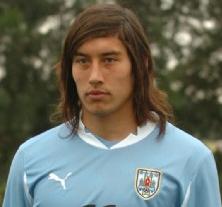