Around MLS: MVP talk, dates released for playoffs, and more

We talk who is in the running for MLS MVP, the dates released for the playoffs, and more.

Share All sharing options for: Around MLS: MVP talk, dates released for playoffs, and more

Los Angeles Galaxy defeated FC Dallas in LA last week, extending FCD's losing streak on the road to three in a row. Let's look at what else is happening around MLS.

With the season winding down, it's time to start considering who could become the new MLS MVP. Last year's MVP was Mike Magee of the Chicago Fire. My top five for this year(no particular order):

Bradley Wright-Phillips - BWP is scoring goals at will this season and is the front runner for the Golden Boot. He is currently sitting at 24 goals. He is only three short of Chris Wondolowski's single season record of 27 goals. BWP has five games left to break it. I'm sure he will. Doing that alone could make them MVP.

Landon Donovan - Since announcing his retirement following this season, the dude has been playing out of his mind. In the past eight games, Donovan has notched five goals and eight assists. LD currently leads the league in assists this season with 15. Diego Valeri and Robbie Keane aren't far behind with 14 each. He is really making a late push for the MVP. Already the all-time leading goal scorer in MLS, Donovan is only three assists shy of tying and four shy of beating Steve Ralston's record for assists all-time in MLS.

Robbie Keane - At the beginning of the season, I predicted Keane would become the MVP this season. He is one of the most underrated players in MLS. He has consistently put up great numbers each season for LA. This season he has 15 goals and 14 assists so far. Great numbers. Keane or BWP are probably the front-runners for MVP at this point.

Diego Valeri - Valeri is another guy making some noise this season. With nine goals and 14 assists, he is making a huge impact for the Portland Timbers this year.

Dom Dwyer - Like BWP, Dwyer has been scoring goals like crazy. He has slowed down a bit after a hot start to the season. Sporting Kansas City haven't exactly been themselves recently. If they turn it around and Dwyer keeps scoring goals, he could definitely win MVP. 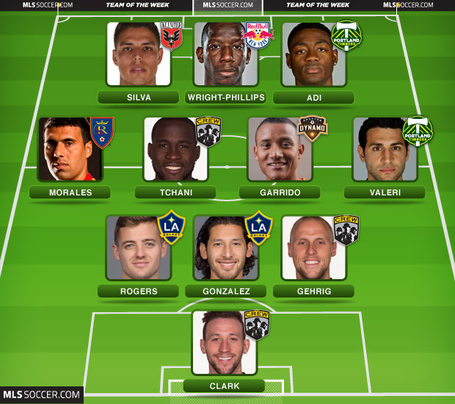 Bradley Wright-Phillips was named Player of the Week after his hat-trick performance last week.