Around MLS: Orlando City ready for 2015, rosters frozen, and more

Orlando City announces players heading to MLS with them in 2015, all rosters in MLS are frozen.

Share All sharing options for: Around MLS: Orlando City ready for 2015, rosters frozen, and more

FC Dallas beat Vancouver Whitecaps 2-1 at home last week. Let's look at what else is happening around MLS.

USL Pro side Orlando City released the names of the players making the transition to MLS in 2015 with them. A majority of their players were cut. But a select few have made the roster.

Kaka - currently on loan with Sao Paulo FC in Brazil.

Kevin Molino - the midfielder was the club's first MLS signee and lead all of USL Pro in 2014 with 20 goals nine assists.

Estrela - the midfielder is one of two players signed from the SL Benfica youth.

Rafael Ramos - the defender is the other player signed from Benfica's youth ranks.

Tommy Redding - the club's first homegrown signee, a defender for the US U-18s and native of Florida.

The club is also in negotiations with Luke Boden, Harrison Heath, and Adama Mbengue. The rest of the players have been released.

As of Monday night, all MLS team's rosters are frozen. Teams like Columbus Crew and Vancouver Whitecaps came close to making some additions, but nothing came to fruition.

However, Vancouver did add two Homegrown players to their rosters for 2015. Marco Bustos and Kianz Froese are the club's 10th and 11th homegrown signees. 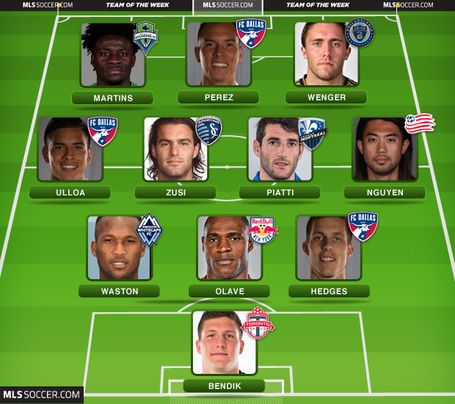 Blas Perez was named Player of the Week. Whoop!

Vote Blas Perez for Goal of the Week here.