FC Dallas vs Vancouver Whitecaps: What we learned

Three points at the end of the day really is all that matters.

Share All sharing options for: FC Dallas vs Vancouver Whitecaps: What we learned

I know I beat horse with the motto that you win your home games no matter who you are facing. That motto rang so true on Saturday night as FC Dallas downed the Vancouver Whitecaps 2-1. It wasn't always pretty, the team didn't always play their best, but at the end of it all the three points were all that mattered.

It didn't matter if that was a cross

What more can you say about the first goal from Blas Perez. I honestly still do not believe it went in but they count all the same. The second was merely being in the right place at the right time, which Perez typically finds himself there.

But what really stands out to me isn't just the two goals. It was the full on effort that this man put in for 90+ minutes on Saturday after going 180 minutes for Panama in two other games earlier in the week.

I would love to see what kind of milage he put on his legs this past week because it seemed it was all over the place on Saturday. Time and time again he was tracking back to defend the ball and get the attack back in motion.

As much as we've complained on our end about his antics on the field, you can't argue with the leadership that he has brought to the table this season. Oscar Pareja commented on how truly important he was to the team in the locker room before the game.

Blas sets the tone for this group in the locker room and on the field also. In the field you saw it. He's a player who gives all he has and then the game rewards him with two goals today. We needed him today. He played two games during the week and came in the first day after that and said I want to be on the field. That represents what this group is about and I'm glad for him. He sets the path and the boys follow him.

Other players had similar comments, like his strike partner Tesho Akindele.

He sets an example for all of us. He is one of the older players on the team, but he is always working hard on the field every match, even tonight after he played three games this week. He's running all over the place. He is giving us encouragement and keeping us going. Blas is a great example for everyone on the team.

Alright, I have to watch this goal one more time.

When looking back at this game I thought to myself, boy there were a lot of recovery moments, interceptions and clearances in this game. I'm a tad too lazy to count all of this up but just on a glance it looks like a ton. 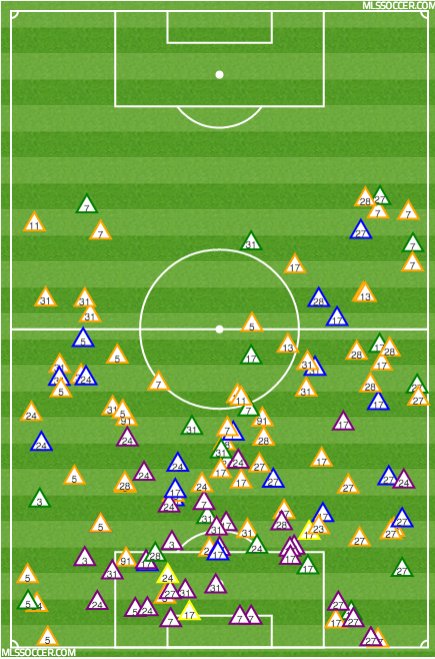 A lot of those numbers you're seeing in there are Perez, Michel, Je-Vaughn Watson and Zach Loyd. There is also some Victor Ulloa and Matt Hedges mixed in there to but boy do you get a lot from Perez (on corner kicks), Watson and Michel. I thought part of the way through this game that Michel was struggling to keep the ball but on the opposite end he was doing a heck of a job winning it back. So was the rest of the team really as the possession edge was in FCD's favor at 55%.

Given the toughness of the remaining schedule, having a total team defense like this will go a very long way.

Outside of Perez, we're seeing a lot of roster rotation going on here. Saturday night was another big point in how Pareja is managing his roster in the final stages of the season. We're seeing Akindele get some rest which paid off last week in Salt Lake, we're seeing Moises Hernandez and Jair Benitez split minutes at left back and while it didn't get reported too much, last week Pareja gave guys like Fabian Castillo and Victor Ulloa time off from training.

All of that is key going into the final six weeks. You have to have players that are sharp this time of the year. It also doesn't hurt that Mauro Diaz is getting closer and closer to being his old self. That cheeky pass he had in the second half to Castillo nearly set up a goal. Pareja had plenty to say about Diaz after the game.

Mauro's getting there. Today was a very demanding and taxing game but he needed to come and get his rhythm quick. Mauro knew he needed to get rhythm and make the team play better, which is a huge responsibility for Mauro and he did it. That tells me that he's getting to his best and I'm happy to see that.

If anything getting Diaz back to the March and April version of him by the middle of next month seems to be the goal here. Given how the schedule could play out, those last couple of games could be key against teams that could also be out of the playoff picture.