FC Dallas took care of business in Los Angeles last week against Chivas USA. Let's take a look at what else is happening around MLS.

Bayern Munich are in Portland gearing up to take on the MLS All-Stars Wednesday night.  Some of the German World Cup winners aren't with the team, but they are not short of talent. Robert Lewandowski and Franck Ribery are still there and ready to rock 'n' roll. Oh, and you might have heard of this one dude named Julian Green. He's in Portland as well. Hopefully we see him get some action.

Okay I think that's far enough. If you want to see the full list and game recaps of all the All-Star games in MLS history, click here.

Uh oh Toronto...your main man is hurt and out 2-3 weeks. What will you do? It will be hard to replace Jermain Defoe's attacking prowess. Defoe has tallied 11 goals and two assists this season. In games without Defoe, Toronto FC has two wins and three losses. The fact is, you can't replace Defoe. But, the front office has done an outstanding job. Bringing in guys like Michael Bradley, Defoe, and Julio Cesar will definitely increase your reputation. But, I'm more impressed with what Toronto has done with filling in the spots around these stars. The additions of role player guys like Jackson, Luke Moore, Justin Morrow, Collen Warner, just to name a few, have really helped this team out a lot.

For now, I think Toronto will do just fine without him. This is a very scary team when healthy. I wouldn't want to play them in the playoffs.

The Los Angeles Galaxy are, in my opinion, the best team in MLS at the moment. These guys are killing it. If not for losing away to Sporting Kansas City a few weeks ago, the Galaxy would be on a 10 game undefeated streak and outscoring opponents 23 to eight.

If the rumours are true and LA signs up Sacha Kljestan, can anyone stop them from winning a 5th MLS Cup? I don't think so. I already predicted at the beginning of the season they would lift it up again and I'm sticking with it, Kljestan or no Kljestan. (Don't get me wrong, I don't want them to win it. Obviously I want FCD to.) 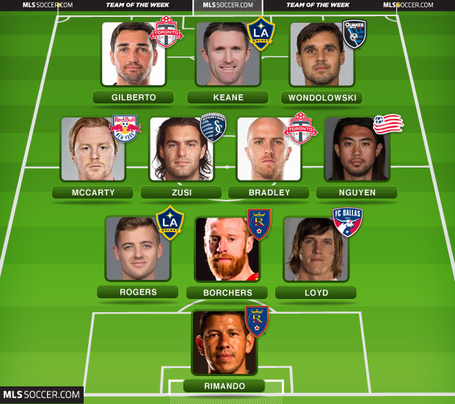 Robbie Keane was named Player of the Week after bagging a brace.