Share All sharing options for: Scratching the Chalkboard: Papi the Master Tactician

The first half of last Sunday's match between FC Dallas and Chivas USA was very reminiscent of a knock out stage match in the World Cup - very tentative start, both sides willing to sit back and concede possession and overall not much flow to things. At the half, Oscar Pareja made the tactical shift that changed the course of the match and Chivas USA were unable to match it and secured Dallas their first road win since that 4-1 spanking of Houston on April 5th to lay claim that the cannon stays.

Castillo to the Left

The attacking versatility of Fabian Castillo is something of double edged sword. On one hand it's great to have a player who can play multiple attacking positions to create wrinkles in opposing defenses but on the other hand, his versatility moves him into positions that he's not best utilized in certain situations. Last Sunday's match was a prime example of that. 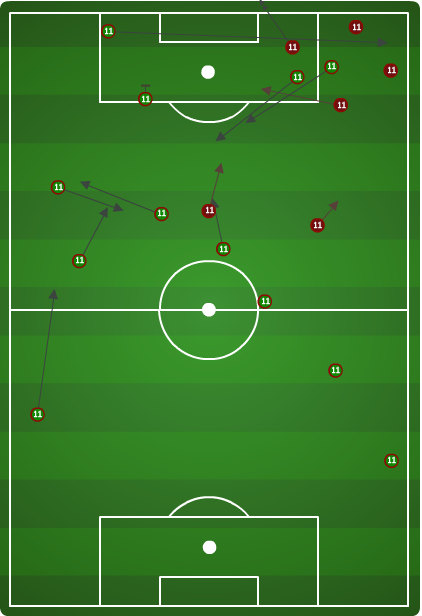 These were all of Castillo's first half touches. And as you can see, it's nothing to sniff at: 6/9 passing, 1 key pass, 2 shot off target, 1 blocked shot, 1/2 successful dribbles. His first half assignment was to play off of Blas Perez up top and try to get behind the Goats' backline with his speed. The problem with this is that it doesn't give Castillo many touches on the ball (I know, I know - many of us here would rather he take one less touch). To over simplify, Castillo with the ball > Castillo without the ball.

Now compare his first half with the second half touches: 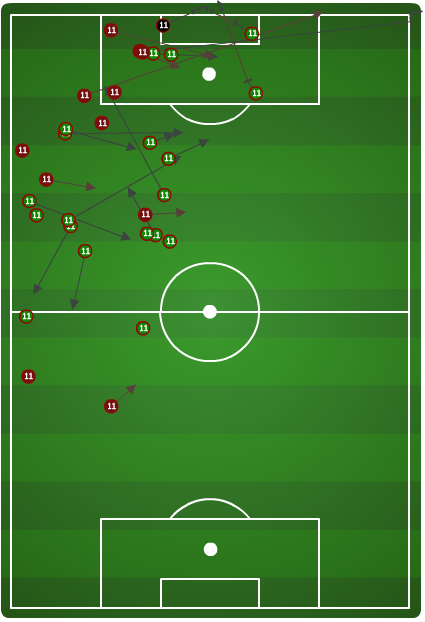 A vast improvement in terms of getting on the ball as Castillo's numbers in the second half were: 11/17 passing, 1 assist, 1 shot on target, 2 shots off target (including that unlucky shot off the post after that fabulous dribbling exhibition through half the Chivas defense), 1 blocked shot and 5/8 successful dribbles.

I was quite surprised that Castillo wasn't played out on the left wing to begin the match, but credit goes to Papi for making the changes necessary. The substitution of Mauro Diaz for Andres Escobar was fantastic and it was that sub that moved Castillo to the left that caused all kinds of problems for the Chivas defense. I could count at least 3 times where Castillo was on the ball and within seconds he drew two defenders to him near or inside the penalty box.

It seemed like this kind of move or tactical change rarely seemed to happen under the guidance of Schellas Hyndman. If the change did happen, it would be 15-20 minutes too late and I wouldn't see Dallas picking up 3 points from this one if the team were still under Hyndman's care. It was a small move and Castillo, Diaz, Perez and Akindele still had to do all the offensive work to get the game winner, but it was still noteworthy in my eyes.

It's hard for this center midfield pairing to shine when the likes of Fabian Castillo, Blas Perez and Tesho Akindele were in the spotlight, but this Adam Moffat - Victor Ulloa pairing quietly had a beast of an evening together. 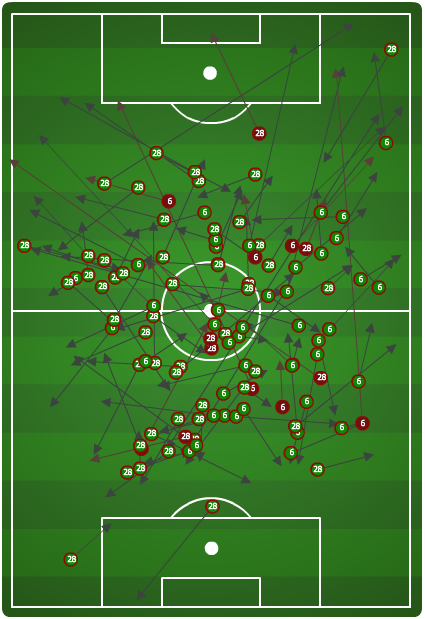 93/106 passing. 2 key passes. That's 88% passing and in this league that is astonishingly high for central midfielders to combine for that high of a completion percentage. The "pulley system" that they have going on is working wonderfully at the moment as it's practically seamless how comfortable they are in knowing when one of them needs to push up and when one of them needs to stay back. It's so rare that I ever catch them playing a flat line (while in possession) as one of them is constantly higher up and the other shading back. They were moving off one another's movements so effortlessly and with such ease that they seem to have been playing together for years, not just a handful of weeks.

Of course, credit goes to Oscar Pareja for finding this midfield tandem in spite of the injury crisis and the personnel turnover. He's found a pairing that not only works hard for one another but also gives the attacking Dallas players plenty of freedom to do just that, attack. I don't have time to look at the tape, but there was once instance off a corner late in the game where you could see Victor Ulloa making a 60 yard sprint back to help the defense. He never saw the ball, but that selfless sprint back slowed a Chivas counter from amounting into anything.

It's so good to have Oscar Pareja back with the club that he's served so faithfully for so many years. Everything seems different under his care. Even during that winless spell earlier this season felt much different than the previous two years where Dallas underwent winless streaks as well. There was at least progress, growth and a vibe from the players that they were going to get out of it. I never felt or saw that out of Hyndman's team, even though they were largely the same core players.  If Oscar Pareja doesn't take home the Coach of Year award, I don't get soccer anymore. But then again, I just realized this morning that Nick Rimando has never won MLS Goalkeeper of the Year either, so there's that.