Observations and Photos from FC Dallas Reserves at Pittsburgh Riverhounds

The Baby Toros (Toritos?) traveled to Pittsburgh and our old stat guy was there, with a camera instead of calculator this time.

Share All sharing options for: Observations and Photos from FC Dallas Reserves at Pittsburgh Riverhounds

Living in Pittsburgh it's obviously rare that I get to see my favorite team play live. So, you can imagine my elation when I learned that the local USL side would host the FC Dallas Reserves this year. The Pittsburgh Riverhounds play in a lovely stadium that opened last year just across the Monongahela River from downtown Pittsburgh. I'm fortunate enough to have a press pass, so I was able to wander around the stands and even the edge of the field taking in the match and snapping photos. I'm not a great photographer, but I hope you enjoy some of the shots below.

I'll spare you a blow-by-blow recap of the 3-1 loss, because meetings between reserve teams and USL Pro clubs or inherently odd. David Texiera (23), Ryan Hollingshead (23), and new signing Walter Cabrera (24) were the oldest players for the good guys in blue and white away kits, and the youngest were five academy players who are still in high school. Meanwhile, all but five players (and some youngsters on loan from their MLS partner, Houston) on the Riverhounds roster were born in the 1980s, and they desperately needed a win to stay in the USL playoff hunt. 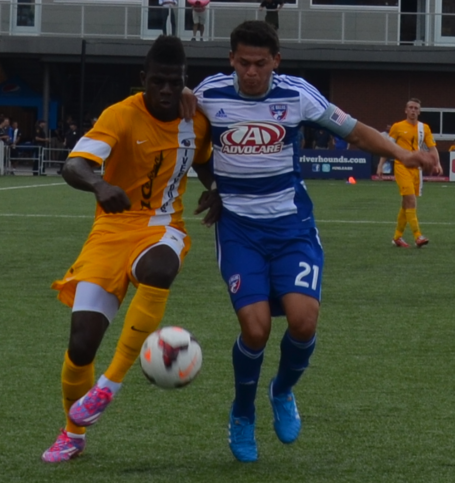 I will say that new signing Cabrera (pictured above), had some nice moments, dispossessing the Hounds in the final third on a few occasions. Certainly relevant that he was part of a backline that allowed three goals, but considering he only met his teammates a couple weeks ago (and a few of them are high schoolers), I'm giving him a bit of a pass on goals allowed for now.

The first three pictures below (click to enlarge) were taken moments before each of the first three goals were scored. The first was a rocket from just inside the box by 'Hounds defender Rob Vincent. On the second, Richard Sanchez could only deflect a cross from Matthew Dallman, subsequently buried by Kevin Kerr. Dallas' goal came when Michael Lisch (on loan to Pittsburgh from the Dynamo) flat out fumbled a Kellyn Acosta cross and Cobi Span headed the bouncing ball the last couple inches over the line.

I didn't get a great shot of Pittsburgh's other goal, which was headed in by Mike Green off a Dallman free kick. By the way, Dallman's within striking distance of topping the USL Pro assist leaderboard for the second straight year, so it's no surprise that he was a the man of the match on Sunday. For Dallas, I was most impressed by Hollingshead (who kept popping up in front of goal), Acosta (playing in central midifeld), Daniel Garcia (some good runs and nice corner kicks) and Cabrera. Moises Hernandez was disappointing, but he seemed to be favoring his left leg during most of the match, so his health was likely part of the issue.

Hope you enjoy the pictures, and if you're ever in Pittsburgh during the USL Pro season, remember that Highmark Stadium is a great place to watch a game.