Evidently the fate of USMNT World Cup star Jermaine Jones was decided by a blind draw. It seemed inevitable that Jones would be heading to Chicago, where his father is from. But, another team decided to toss their hats into the ring. That team is New England Revolution. So, MLS did what any league would do. They decided to do a blind draw to see where Jones ended up and not let the player decide, because that's crazy. Who would do that? Oh yeah, everyone would. But no, not MLS. Nonetheless, Jones ended up in New England. Major League Soccer is constantly made fun of for their rules, but this has to be the weirdest way to join a team.

Are New England contenders now? Are they a lock for a playoff spot with Jones on the roster? Hell no to both. New England has been the most inconsistent team in MLS this season. They sit in 6th in a weak Eastern Conference, so it's possible they will make the playoffs. The only team I can see them replacing in those five playoff spots is Columbus. I don't think it will happen though. Want to know why? The only teams left on Columbus' schedule (except for New York) are non-playoff spot teams (New England twice, Philadelphia twice, Houston, Montreal twice, Chivas USA).

Want to hear New England's schedule? The only non-playoff sport teams NE plays is Montreal twice, Houston, and Chicago. New England has a far harder schedule. On schedule alone, I don't think they make the playoffs. Another thing that worries me is Jermaine Jones' fitness. He hasn't played since the World Cup and it looks like he has been partying with every celebrity imaginable. How the team will gel is another question. I just don't see them making the playoffs until maybe next year.

New York City FC's Frank Lampard has announced he has retired from international football and will no longer play with the England team. We all expected he would. Now it's official. I think England will be just fine without him.

Will Machester City play Lampard while he's on loan? I doubt it. He might make the 18-man squad a few times if someone is injured. Doubt he is used. This loan is just to keep him fit and sharp by training with world class players.

The Columbus Crew sold Costa Rican defender Giancarlo Gonzalez to Palermo of Serie A in Italy. After an impressive showing for Costa Rica in the World Cup, Gonzalez's short stint in MLS is over as he moves on to Serie A.

No numbers have been made official for the sale. But, it's being reported that Gonzalez has been sold for a record fee for a defender in MLS. The funds will be divided between Columbus and Gonzalez's former club in Norway, Valerenga. Good business for Columbus. 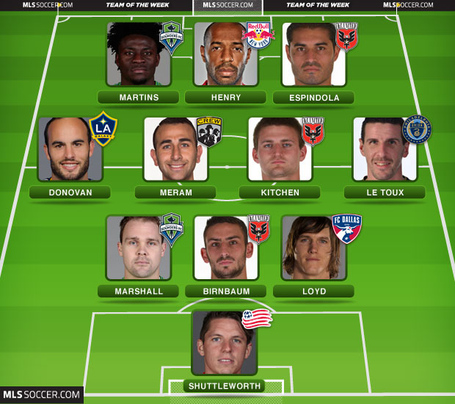 Player of the Week was Obafemi Martins.

Stream of the Week