FC Dallas dismantled San Jose in an impressive 5-0 outing last week. But, I won't talk about them. As much as I want to, I'll leave that to everyone else here on Big D. Let's take a look at what else is going on around MLS.

The smallest player in MLS is standing tall. Possibly the hottest striker in MLS at the moment (other than Tesho Akindele), Plata has scored 11 goals and notched five assists in only 18 appearances for Real Salt Lake. Even more impressive? He has scored his last two goals with his head. He is only 5' 2".

He has arguably been the most productive player in MLS this season and is one of the biggest reasons RSL is first in the Western Conference. If you remember, RSL started off the season hotter than anyone, undefeated in the first 12 games of the season. Alvaro Saborio was being, well Alvaro Saborio. Saborio was injured, and everyone was wondering if RSL would be able to recover. Especially with Kyle Beckerman and Nick Rimando heading off to Brazil. But, then there was Joao Plata. In Plata's first two seasons in MLS, he scored just four goals. Now, he is scoring at will and filling the void of Saborio.

RSL is undefeated in their last six games, just added a new Designated Player in Sebastian Jaime, and Saborio could be returning soon. This team is going to be very scary.

Evidently Andrea Pirlo is considering a move to MLS after his contract with Juventus expires. I mean, what a bargain Juventus got when signing Pirlo from AC Milan on a free transfer in 2011. And then again in 2013 after he considered leaving Serie A and ultimately decided to sign a new two-year deal with Juventus. Will Juventus want to sign him again? His contract expires in 2016. At which time he will be 37. I doubt Juventus will gamble on him again. But, who knows? Pirlo seems to be an ageless wonder with a magnificent beard. Could a move to MLS be on the way then? Possibly. Frank Lampard is 36 and MLS expansion side New York City FC snagged him up. Why wouldn't an MLS side try to sign Pirlo? He puts fans in the seats. Who knows how long this guy could keep on playing? Pirlo gonna Pirlo, ya feel me?

The MLS weighted lottery... Yeah, so New England Revolution won a weighted lottery and acquired former US youth international striker Tony Taylor. Portland was the only other team that entered the lottery. Taylor will be added to the Rev's roster following the receipt of his International Transfer Certificate.

Taylor, 25, went the European route, playing for teams in Portugal and most recently in Cyrpus. His career started off promising. But, has started to go downhill. If you don't know, Cyprus isn't exactly a top footballing country.

This move is very curious at best by New England. The Revolution just recently traded a solid striker in Saer Sene and an international roster spot to New York Red Bulls for Andre Akpan and allocation money. Akpan isn't exactly the scorer the Revs need right now. Maybe they think Taylor can revitalize his career? Who knows?

New England fans were hoping Juan Agudelo, who has been training a lot recently with Orlando City SC, would be on his way back to the Revs. But, it looks like a second division side in Germany is keen on Agudelo after deals with Hannover and Sporting CP never came to fruition. Fun fact: Agudelo would join fellow American Bobby Wood at 1860 Munich.

Drew Moor out for rest of season

With RSL, Seattle, Los Angeles, and Dallas all but locks for playoff spots, that leaves only one spot left. It was already going to be tough to squeeze into that last spot in a very strong Western Conference. It has been a general consensus recently that Vancouver, Portland, and Colorado would be battling it out for that fifth spot. Now it's almost impossible. 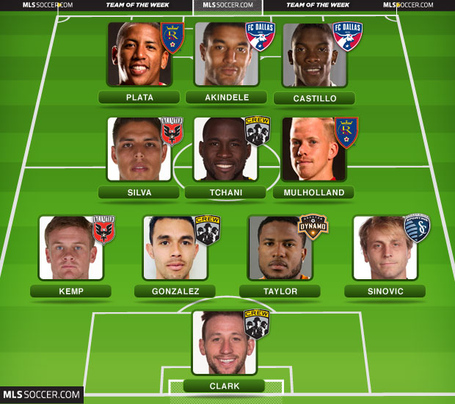 Tesho Akindele was named Player of the Week.

Oscar Pareja was named Coach of the Week.

Stream of the Week