Scratching the Chalkboard: The Fantastic Four

Man of the Match performances from several key players for FCD

Share All sharing options for: Scratching the Chalkboard: The Fantastic Four

It's funny to say this but it was a little bittersweet watching FC Dallas flat out demolish the San Jose Earthquakes. It's not because it was my place of birth, or that I spent most of my youthful summers in San Jose that had me a little torn, but rather I was this close to going to that game. Work was supposed to have me in the area this past week, but the trip got delayed until next week. How sweet would it have been to sit in Buck Shaw Stadium reveling at how marvelous Castillo's dribbling was and how equally incredible the Quakes' defenders did their traffic cone impression? Maybe next time.

This has already been covered here, here and here and everywhere else on the interwebs just how dominant Fabian Castillo and Tesho Akindele were last Saturday against the Quakes. Dallas began finding their rhythm again once they moved to a 4-4-2 lineup and pairing Akindele and Perez together. As good as that pairing is/was, it was shocking just effective the Castillo - Akindele pairing was as well.

I'll be honest that I'm not a fan of Castillo up top and preferred him on the left wing. He just does better when there's more grass to run on to and there's more space on the flanks than up top. But as always, Oscar Pareja knows far better than this idiot and the pairing worked beautifully as their speed completely neutered the San Jose defense. This is actually my favorite chalkboard from the night: 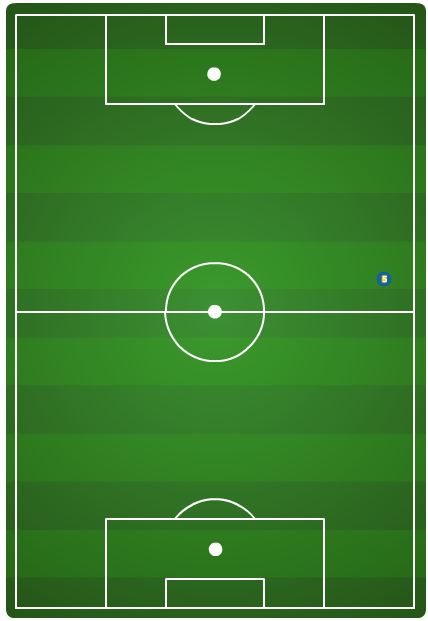 That is Victor "Bane" Bernardez' fouls for the night. That's right, Bane Bernardez just got one foul for 90 minutes of work. Can't foul the guy if you can't touch the guy. 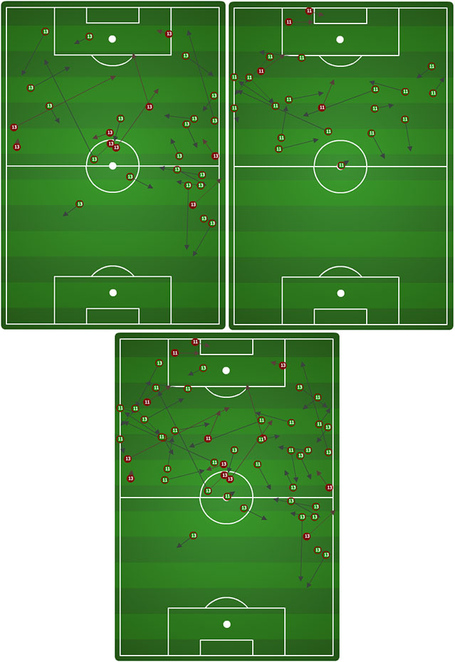 38/51 passing (75%), 3 key passes, 1 assist between the Fabian and Tesho. Akindele obviously favored the right hand side more, and Fabian the left but both did well to play off one another and spread themselves out evenly to make it difficult for their opponent to mark them. That kind of movement, combined with their speed is a central defender's nightmare.

You know what? I lied. This is my favorite chart from the night:

That's 8 shots from Fabian Castillo. EIGHT. Six of which were inside the box. Sometimes I'll see something like this from Chris Wondolowski and think nothing of it because Wondo's a poacher and creates his chances with smart off the ball movement (which he is incredible at, so no disrespect to him). But Castillo's game is incredibly direct. It's gather the ball and gather some speed and run it straight at you. It's why we saw the Rapids double team Castillo every time he had the ball near the penalty box. We'll definitely see Real Salt Lake double up on Castillo faster because of this performance.

And I've said this before and it's worth repeating that whoever (I'm looking at you Papi) developed Castillo's ability to shoot the ball just a half second, full second earlier is making all the difference in his goal output this year. Akindele's second goal was a prime example of that as Jon Busch was unable to properly set his feet and in the end he coughed up a rebound straight to Akindele for the goal.

This has been an unlikely pairing as I ever thought I'd see out there but the Matt Hedges - Zach Loyd partnership has been solid, no more than last night when Zach Loyd's full back recovery speed was crucial on several potential goal scoring opportunities for the Quakes. 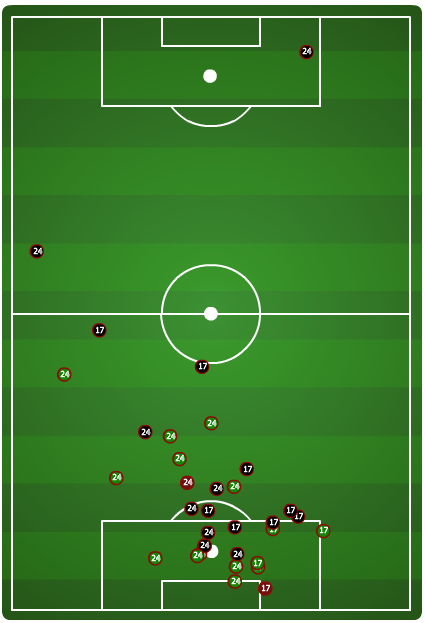 Obviously most of the defensive plays came from the middle of the field. I'm mostly just showing this because I thought it was funny that Hedges logged a recovery inside the Quakes penalty box. Enough, onto the good stuff:

That's a beautiful 6 blocks from Hedges and Loyd. Mostly impressed by how central these blocks are as they are generally fairly dangerous looks on goal and stopping a shot on goal is usually a good thing. 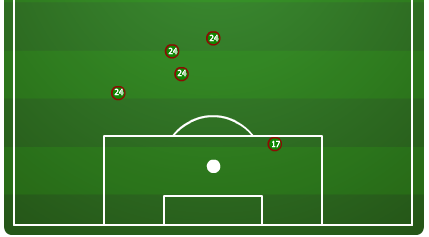 These are the 5 tackles that the pair recorded which is unusually high for center backs to accomplish. The most notable one here comes from Zach Loyd inside the penalty box. I remember Matias Perez Garcia had found his way onto his favored left foot and barring that last ditch slide tackle, he would've been in on goal alone against Raul Fernandez.

It's been said all everywhere, but I can't say it enough. Castillo, Akindele, Hedges and Loyd were dominant last Saturday with each player's strengths being utilized to its maximum potential. Gotta give credit to Oscar Pareja and what's he's done with this team. Not every tactical decision he makes pans out, but at least you can see what he's trying to do and more often than not he does get it right.

It's good to have a team this stacked with quality players and to have a head coach who know's where he's trying to take the team. Good times being a Dallas fan these days.