The peaks and valleys of Fabian Castillo's century of games.

Fabian Castillo put a rather emphatic bow on his first 100 MLS matches on Saturday night. He set or tied his career highs for goals, shots, and shots on goal, all in 77 minutes. Instrumental in all 4 FC Dallas goals while he was on the pitch, it was the type of performance that his fans have always been hoping for. Having tallied a goal and/or assist in each of his last 6 league matches, the 22-year-old has never been anywhere near this productive before. At least, that's the common narrative, but take a closer look at his history, and you can see that the current streak isn't as far above his previous peaks as we tend to assume.

I took Castillo's game log from his official player page, and made the following charts, put them in 10-match chunks, and showed his scoring contribution, shot, and foul data per 90 minutes, as well as his minutes per game. What we see is a player who has certainly had peaks and valleys before. While the current peak is the most impressive, it's highly doubtful that he could maintain such a lofty standard, and he needs to keep working so that he regresses only to the mean, and not well below it. 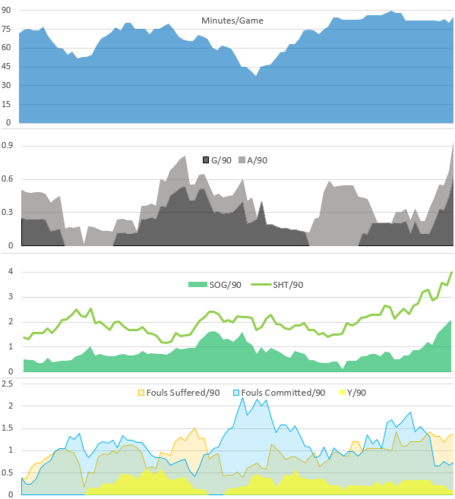 Leftmost marks represent his first 10 FC Dallas matches. All matches with 0 minutes are ignored in the averages, regardless of the reason Castillo did not play. The biggest data data void here are Castillo's dribbles, which I have written about before, and in which he leads MLS this season with 4.1 per game.

Afterwards, he seemed committed to setting up others far more than himself, earning five assists in five matches between August 17th and September 14th, 2013. This made for an excellent assist rate to close the season, but amidst that he still went over 1500 minutes without a goal despite shooting almost twice per 90. More disturbingly, he was setting career highs in shots per 90 (up to that point) around 2.50 in the midst of the slump.

The above graphs' quick peaks and valleys look somewhat like like a shorter-cycle version of Eddie Johnson Disease, wherein a talented player does very well then, either through a lack of motivation or an overdose of confidence, falls into a slump. Overall, Castillo has been so consistently erratic that trendlines for his goals per 90 and assists per 90 essentially hug his career averages of 0.23 and 0.20, respectively, both showing only miniscule growth. In short, to show that he's actually grown, Castillo needs to keep producing above those numbers. It will certainly help that Saturday's dominant performance will continue to boost 10-match averages over the next couple months.

By no means am I saying that Castillo is bound to be just as frustrating as he has been at times in the past. He certainly seems to be maturing, which he should be at 22, but Fabian will come down from the heights of the last few games. His fans and coaches should be hoping that he has exorcised his worst decision-making demons, but a little devil on his shoulder will probably still get his ear from time to time, leading to ball-hoggery, ill-timed fouls, etc. But if these instances can get rarer and rarer still, the young Colombian looks to become a special player indeed.