Scratching the Chalkboard: The Michel hat trick and the evolving FCD team

I'm hoping this name sticks for a while around these parts

Share All sharing options for: Scratching the Chalkboard: The Michel hat trick and the evolving FCD team

The diversification of this FC Dallas squad continues to impress. Oscar Pareja decided to go with Mauro Diaz as the primary catalyst for the attack, and while that turned out to be fruitless, there were other elements in play that showcased the ever changing and evolving attack and style of play under this FCD team. In Papi We Trust.

Whatever issues you might have had with Michel earlier in this season or the previous, has to be put to rest given his recent string of matches. Last night was a prime example of just how deadly the Brazilian can be when he's out on the pitch. The biggest gripe against him was his propensity for turning the ball over needlessly in his own half either by a sloppy pass or being dispossessed. Neither happened this past game and there's reason to be assured that those mistakes are behind him now.

In terms of how potent Michel's offensive game is, just remember that he's the Hoops leading goal scorer in league play this year with 7. Compare that to the other prolific scorers Dallas has on the roster, and here's how he stacks up: 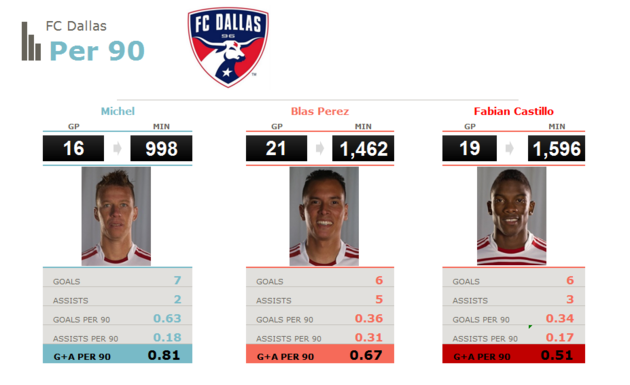 What's shocking are the number of registered assists for Michel is just 2. As we know, the delivery of set pieces, crosses that Michel puts inside the box cause a lot of havoc for the opposing defense and indirectly lead up to a goal. Last Saturday's match was a prime example of that as he didn't register an assist against the Rapids but those of us who watched the match know that it was his crossing that led to two of the three goals.

Of course, the high goal tally is also a result of the penalties he's taken and scored (5 - which is a team season record), so that does balance the stats out a little bit. But as we know too painfully thus far, penalties aren't a given especially when compared to the other two gentlemen in the graphic above.

So the hat trick. I'm thinking a classic Michel Hat Trick should go like this:

2. An assist or goal created off one of his crosses. Check.

Regardless of how Dallas lines up the rest of the way, Michel needs to at least be in the 18. Either starting or coming off the bench as a goal scoring/creating specialist. Either way, this team scores goals with him out there and it's a ridiculous luxury to have this kind of a weapon at your disposal.

I've been saying this for a while now, but Oscar Pareja really knows what he's doing with this team. But not only that, he also knows how to fool an opposition into thinking they're doing well, when they've been baited into exactly what he wanted. Our managing editor here, Drew Epperly, pointed this out yesterday that Zach Loyd forced Vicente Sanchez to cut to the middle so to use his weaker foot. For a few moments I was wondering what Loyd was doing getting so close to Sanchez, but after 3 or so of the same play being played out where Sanchez cut to his left, I realized that this was by design. And it wasn't just a Loyd-Sanchez match up. It was pretty much everywhere else on the field.

Here's the data I pulled: 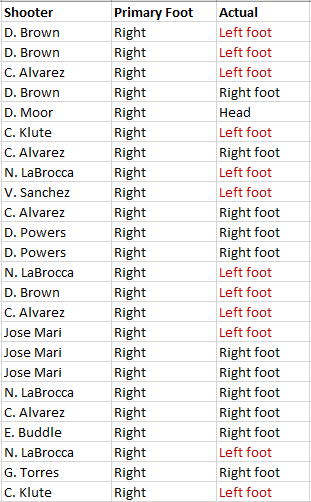 That's 12 out of the 14 shots that were taken with their non preferred or primary foot. (13 if you count the header.) And of course, of the 24 shots that Colorado took, only 5 were on target. The Rapids lacked the patience and composure in the build up to attack Raul Fernandez, but I'm sensing Papi knew that and rolled the dice with this game plan.

Papi said it after the match how this team continues to evolve and it's no accident that this team continues to look great despite the rotating personnel, formation and tactics being deployed out there. No matter what lineup OP chooses, there's a very definitive purpose to what he wants the team to execute and how he wants them to play. One of the said players that's evolving well has been Je-Vaughn Watson. Again, I'm with Drew here about Watson and that his best position here on out should very well be at right back.

Here's what I saw from the past two games: If I were Chivas USA or Colorado Rapids I would be attacking Dallas' right side all night. Watson's not a natural right back and he's bound to make a mistake or fold like a cheap card table under the relentless pressure. How did Watson hold up? Take a look:

This is Chivas' passing in the attacking third. Notice the higher volume of passing coming from the right side versus the left where Watson is patrolling.

It's even more obvious in the last game against Colorado.

Some of this has to do with the opponent's personnel and their preferred style, but every team at this level will identify the weak spot/player and expose it endlessly until the game's over or that well has run dry. Teams weren't able to exploit that side because Watson's been a beast manning that right flank. Here are his defensive stats:

It's fun to say this as Dallas indeed has depth and options across most positions. This kind of flexibility will no doubt help the Hoops the remainder of the season as they make a run for a trophy and an appearance in this year's playoffs. But more importantly, it's fantastic to see that this team can play any formation, any lineup, and almost any tactic to get the result they want.

In Papi We Trust!