FC Dallas is undefeated in there last three MLS matches. Let's take a look at what else is happening around MLS.

MLS is back in full-swing after the World Cup break and the USA stars returned to action.

Houston's Brad Davis made an immediate impact, playing the full 90 minutes and scoring a goal in Houston's 2-2 tie with the New York Red Bulls.

Omar Gonzalez didn't play for Los Angeles Galaxy in their 2-2 tie with Portland.

Erick "Cubo" Torres is only 23-years-old. He now has 12 goals and one assist on the season and trails only New York's Bradley Wright-Phillips in the race for the Golden Boot.

Torres is giving Chivas USA hope of a playoff spot. In Chivas USA's last three games, they are undefeated and have not allowed a goal n each of them. They won by a score of 1-0 every game. Who scored that one goal each game? You guessed it...Erick "Cubo" Torres. But, this last goal was something right out of Hollywood. He scored in the 94th minute on the last kick of the game.

This kid is something special. I hope Chivas USA and MLS do what they can to make this loan a permanent deal. 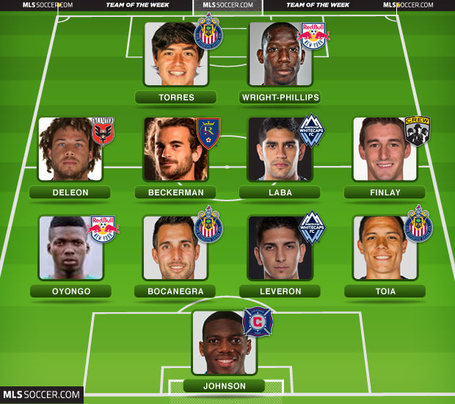 The MLS Player of the Week was Erick Torres.