Scratching the Chalkboard: No Castillo? No Problem

Share All sharing options for: Scratching the Chalkboard: No Castillo? No Problem

This was the kind of depth that this FC Dallas team was capable of showcasing when the roster was pieced together over the off season: plenty of fire power, plenty of first team caliber players and plenty of experience. When "Plan A" aka Mauro Diaz went down, the team resorted to "Plan B" aka Michel and set pieces. When it came down to "Plan C" (bunker and counter with Fabian Castillo) and even sometimes "Plan D" (Blas Perez and Tesho Akindele) to lead the attack, the club experienced some growing pains each week, but steadily and surely the team learned how to get the best out of whoever is out there on the pitch and now with a healthy roster (at least offensively), those tough weeks are now paying off as Dallas can now present multiple looks on the offense to confuse, stretch and unbalance any defense.

From all sources that I know, nobody knew Mauro Diaz would be ready so soon. There were glimpses of him training with the team but we'd all imagine he wouldn't play until maybe this week against Carolina at the earliest. But of course, he made the 18 and gave a magical 18 minute cameo to see the game off and secure the three points. 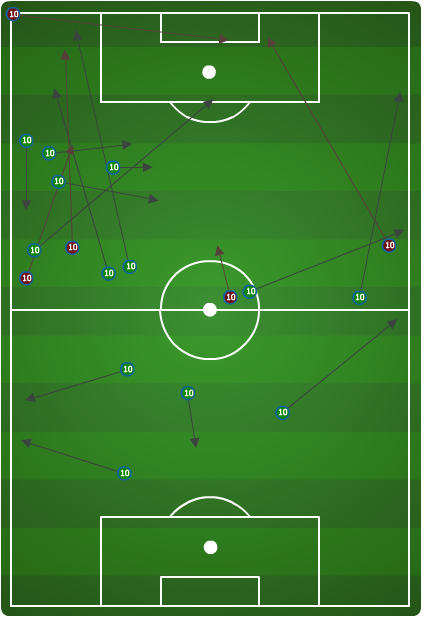 That's 13/18 competed passes in just 18 minutes, with one amazing through ball to Je-Vaughn Watson in the 80th minute and a key pass. The game state at the time had the Philadelphia Union pushing for the equalizer and even though Hendry  Thomas was brought it in on the 68th minute, the Union were controlling the game and had the advantage possession wise (65%) during that 10 minute interval before Diaz was introduced on. The next 5 minutes after Diaz was introduced immediately swung the possession back in favor of the Hoops (67%).

Diaz has a very calming presence with the team. The team seems less flustered in advancing the ball, knowing they just need to find Mauro and let him do his thing. Dallas also looked most sure of themselves and how to attack whenever Diaz had the ball, as you can see from his passes inside the attacking half were mostly direct and into the path of the rushing attackers.

Mauro also knows how to get his teammates to keep up with him. From the 68th minute (Thomas subbed on) to the 78th minute (Diaz subbed on), both Perez and Akindele registered a combined 0 touches for that ten minute stretch.  From kick off until the 68th minute, Perez and Akindele registered a combined 61 touches on the ball, less than 1 per minute. After Diaz came on, there was a combined 22 touches in just 18 minutes, averaging more than 1 per minute.

The Hoops are just simply better with Mauro Diaz and I'm sure the Dallas faithful are relieved and excited for him to be back. 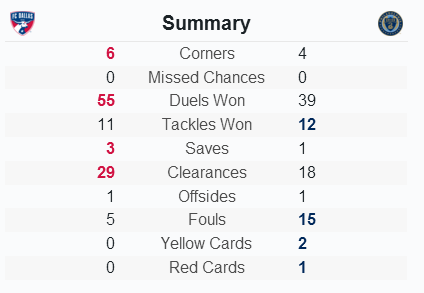 Is this a new trend for FCD? Another game without a single card and only 5 fouls?! Amazing. If Dallas can continue to get healthy and remain disciplined enough not to shoot themselves in the foot, Dallas will no longer just be a playoff contender, but possibly a contender for the MLS Cup.

It is fun being a Dallas fan again. Let's hope these wins, no cards, and returning healthy bodies continues to be a long term trend here. God knows we could use some good news after the recent years.