Share All sharing options for: Down at the Copa - Part 2

To begin our first full day in Rio, we didn't set alarms and slept in. When we rolled out of bed, we walked 2 blocks from our apartment down to Copacabana Beach! At the end of the beach is the ESPN broadcast center. We weren't allowed past the checkpoint, but we saw a few people with ESPN credentials. 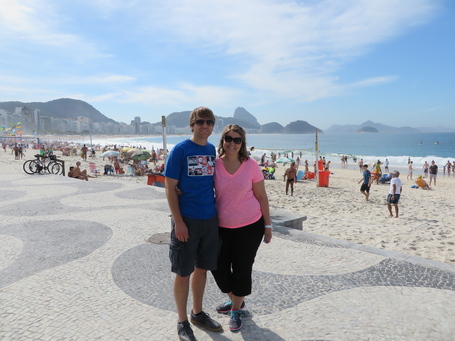 Next, we bought groceries. They don't carry tortillas or salsa. I have been informed that only Mexico and the US care about Mexican food! Ground beef is only found in the butcher shop, which we weren't going to set foot in. Peanut butter is extremely expensive. One can of Pringles (styled as Pringooools) was $4.50. The highlight was discovering this package of "Texas Burger!" We paid about $200 for a small cart of groceries that lasted us most of our 16 days, since we ate out most of the time. 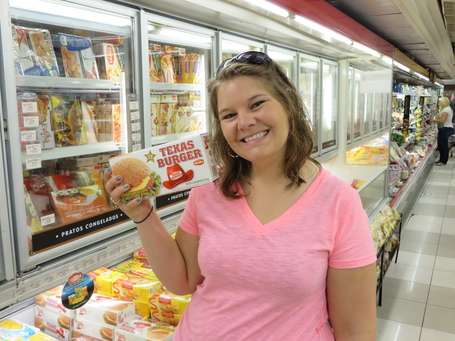 We tried to buy prepaid cell phones, but found out that a Brazilian CPF (equivalent to a Social Security number) is required to activate the phones. The first electronics store would not even sell them to us, but at the second shop there was a motivated saleswomen who sold us the phones by putting who-knows-who's name and CPF in the system. We then bought SIM cards from a street vendor. But after spending way too much time trying to find someone to speak English when calling to activate, we ran into the CPF roadblock. All the cell phone stores are closed on the weekends, but apparently there was a tourist SIM card available. We decided we didn't want the phones anyway after my parents and Josh's friends arrived safely the next day. When I tried to return them at the end of our stay, I was told they could only be returned within 3 days. We ended up giving the phones to the helpful doorman in our apartment building, and he was thrilled! 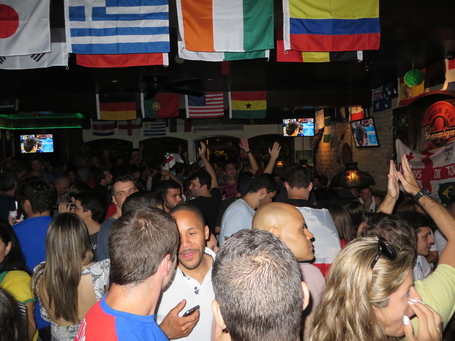 For the England vs. Italy game, we went to Shenanigan's Irish Pub on General Osorio Square in Ipanema. Predictably, it was packed with English fans. The bar had flags hung up everywhere, organized by group. Brazilian restaurants and bars have an incredibly inefficient system of payment, enough to make this engineer go crazy. When you enter, they give you a tab that has all their drink and food options on it. When ordering, the server or bartender puts a mark next to the items you ordered. Before you exit, you pay at the cashier and get your tab stamped. If you lose your tab, you pay R$200 or USD$89! But what if you bought more food and drinks than that? Could you lose your tab and pay the penalty instead? This also means there is an incentive for people to try and swap tabs with you or steal yours if you haven't ordered much. There's always a bouncer at the door to check to make sure everyone has paid. When the game ended, I had to wait in a line for half an hour at the cashier as everyone wanted to pay at once.

On Sunday, June 15th, my parents arrived and so did 3 of Josh's coworkers/friends. That night, we headed out to the Maracanã for the Argentina vs. Bosnia game.

The Metro was packed with Argentina fans. Here are the lyrics to the song they are singing in the video (one I think we should steal and modify for FC Dallas):

Soy argentino (I am Argentinian)

Es un sentimiento (It's a feeling)

We could see the Maracanã as we approached from the Metro. It was majestic. In the line at the gate, we were offered R$1000 for a ticket. I almost considered it, but I thought "This might be my only chance to see Messi!" 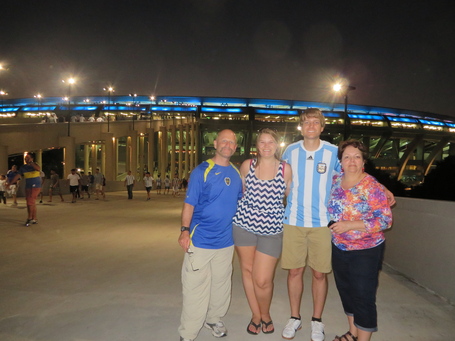 One of my favorite feelings is walking down the tunnel and having that "Ah!" moment as the stadium opens up in front of you. This feeling at the Maracanã might be the best in the world. 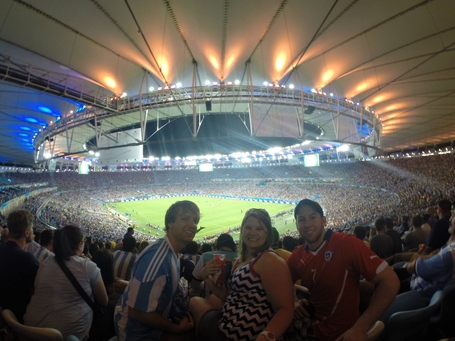 The crowd was probably 60% Argentinian. The biggest section of Bosnian fans were below us, so we heard their chants too. Any Brazilians in the crowd were cheering for Bosnia. The Bosnians did a great job of containing Messi for the first half by bringing a forward back to nip at his heels and collapsing 2 CDMs on him every time he touched the ball. Of course, he's Messi, so he found a way to score in the second half. After his goal, the Argentinians made a bowing motion and chanted "Mes-si. Mes-si." 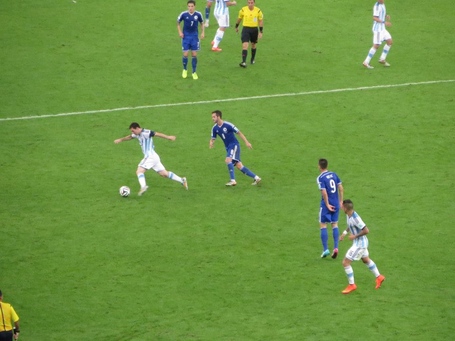 The next day was the day of the USA vs. Ghana game and the butterflies were building. We decked ourselves out in USA gear and headed down the beach to the FIFA Fan Fest. I brought along a Captain America mask, shield, and gloves for my dad to wear. Everyone on the sidewalk stopped him to take a picture with "Captain America!" 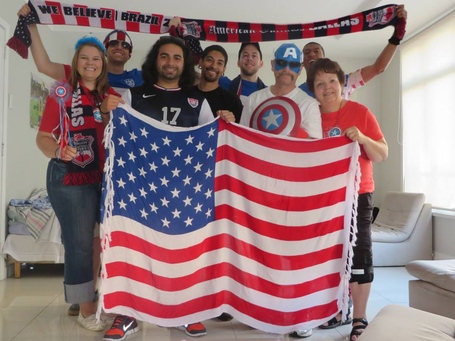 We arrived early enough to get a good spot on the sand to see the big screen. By the time the game started, there were probably 10,000 people watching the game with us, many of them Americans. 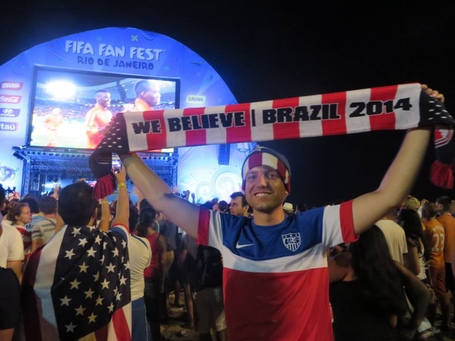 WHAT A START! We co-opted the Messi chant and converted it to "Demp-sey" when he shockingly put us ahead 30 seconds in. The mood was very cheery at the half as the Brazilian band played Michael Jackson songs and we samba'd in the sand. The atmosphere soured when Ghana scored, as I figured we could not advance from the Group of Death without a win. But, you know how this story ends...

After the game, the loudspeakers blared "Born in the USA," "We Will Rock You," and "Smells Like Teen Spirit" and we all sang along until our voices were completely hoarse.