With players returning from injury, what is the best look for this club going into the final 15 games of the season?

Share All sharing options for: What is FC Dallas' best lineup going forward?

Friday night was a lot of fun. Three points, a big crowd and fireworks. But it was more fun to see the likes of Mauro Diaz and Hendry Thomas returning to the field too for FC Dallas as they took down the Philadelphia Union.

The more I watched those two players run around the Union on Friday night, the more I sat and wondered what exactly would things like the formation and best possible lineup be for this club going forward. The last couple months have proven that the young talent on this roster has extremely capable of playing in this league and more importantly producing.

So now that the options are there, what will work the best for Oscar Pareja? 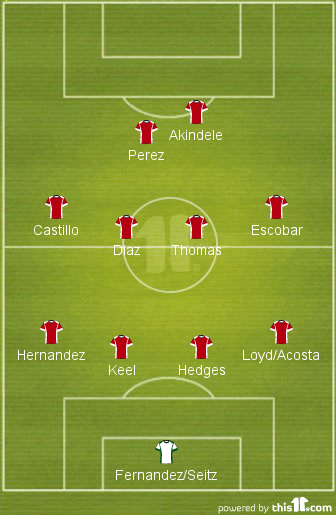 Now I want to point out that as players like Kellyn Acosta get healthy again, I see him pushing Zach Loyd for a starting spot, so for this purpose I'll be including both players. Same in goal, though we that could easily chance if Chris Seitz is indeed out long-term with a leg injury.

Anyways, a 4-4-2 is what I am starting with. This sees our wings have Fabian Castillo and Andres Escobar, which to me is the best pairing moving forward. It also see Tesho Akindele and Blas Perez on the field together, a pairing that in my opinion just flat out works. The last month has proven that.

The midfield brings Diaz and Thomas together allowing the two to play off one another. This is the tricky part with this lineup as it will force Diaz to be less creative and a tad more defensive, something I'm not entirely fond of but in a more flat 4-4-2 it would be required. 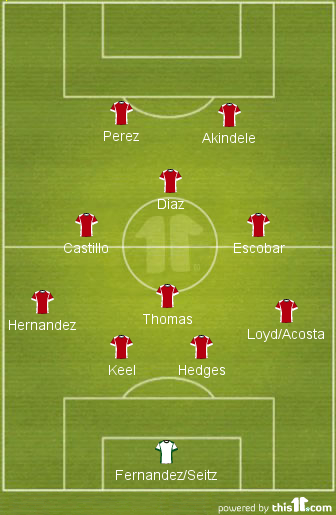 Part of me really loves the idea of a diamond midfield here. Mainly for the fact that it puts more attackers on the field but still has a balance in the defense with a guy like Thomas sitting on top of the defense.

The other tradeoff in both 4-4-2 formations is losing Victor Ulloa on the field. He had played so well over the last few weeks, it would be a bit of a shame to lose him and what he has brought to the team in that span. 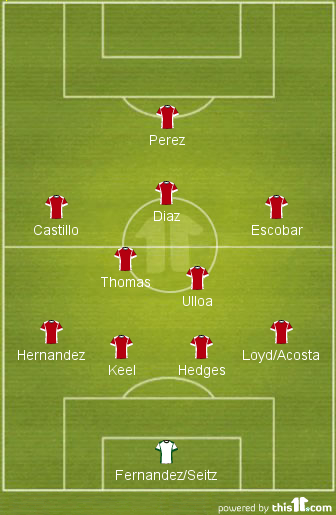 This is more of what we've seen out of the team earlier in the year when more of the players were healthy. Ulloa and Thomas are sitting below Diaz in the center of the field and as we know the wings still have plenty to offer in the attack and in the defense. 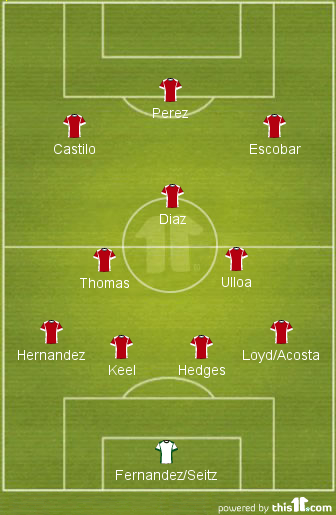 This is very similar to the 4-2-3-1 in my book and some would even argue that these formations are basically the same. The difference here for me is how much it could limit what the fullbacks are able to do in the attack. In this formation it also means the midfield three have to cover a ton of ground on the field, maybe more than they normally would with the two wingers pushed more forward. 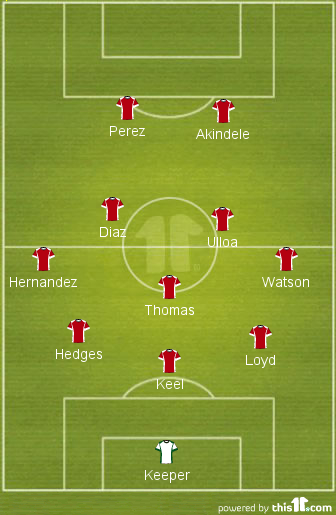 The last one is a bit of a wild thought I saw our old pal Daniel mention on Twitter recently. Forgive me for not placing a keeper name too.

Anyways, Daniel's recommendation had Michel over Moises Hernandez but I see Hernandez being back to stay on the field for longer stretches, if not all 90 minutes.

This is a bit of a nutty formation to begin. Defensively it does mean the three center backs have to be on the same page at all times. It also pulls Hernandez and Je-Vaughn Watson back into the defense for cover but it does allow them to move forward more as needed. Thomas is your true defensive-mid here too, as Ulloa is able to float around and cover for both him and Diaz.

The down fall here is it does mean guys like Castillo and Escobar are left to come in off the bench. That or start over Akindele.

So what is the best look for this club? The last month or so has been good for the club as we've seen guys like Akindele, Ulloa, Hernandez, Escobar and Castillo step up in big ways. But Pareja won't be able to have all of them on the field at the same time.