Is our favorite Panamanian back?

Share All sharing options for: Scratching the Chalkboard: Super Raton

2014 has been a bit of a down year for Blas Perez. The lowest point might have been that missed penalty against the New York Red Bulls on 5/4 or that red card against Portland on 6/11 but this past Sunday we saw moments of the Super Raton that the FC Dallas faithful have grown to love. On top of the goal in the 29th minute, Blas Perez was doing all the things he's so good at, holding the ball, pestering the opponents goal with shots, drawing fouls and helping the team defensively. It was one of his most complete games in a long while, and more of these types of performances in hostile road games will serve Dallas well as they make their push for the playoffs.

When the Dallas defense is under duress, Blas seems to shine and do his best work harassing and chasing to make life difficult for the opponent. And more surprising is that his partnership with Tesho Akindele actually allows him to do all that dirty work without jeopardizing his tactical position. 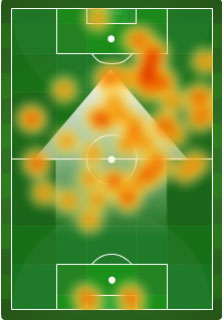 For a center forward, this is a very unusual heat map but gives the perfect look at just how Perez likes to play - always involved and willing to do the grunt work for the sake of the team. This selfless kind of play is inspiring to watch and helps his team perform better. Which was also why I think many of us were surprised when he was subbed off in favor of Peter Luccin. I understood the tactical reason behind that sub, but I thought Akindele would have been the better one to be subbed off since Perez was having such an influential game.

You can see from the heat map above that he's registered a few touches inside our own penalty box. This is not unusual as Blas is often called back to help defend corners and set pieces. 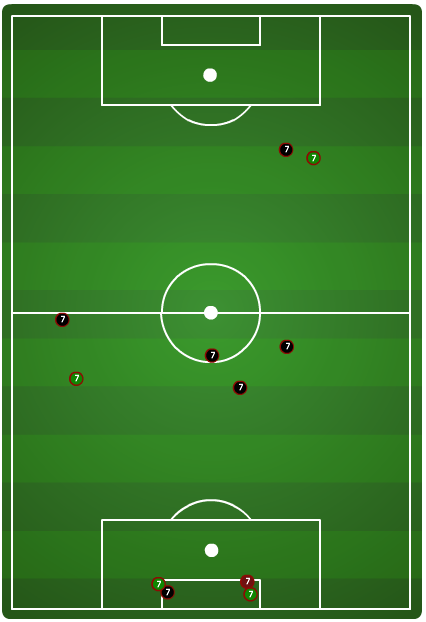 What is encouraging are to see the other defensive plays he made across the whole field, especially the ones high up the pitch. Perez is always hustling to close down the ball carrier but it's good to see that effort be rewarded. Quick note that the two green dots outside of the penalty box are successful tackles. Very impressive to pull that off in open field like that. For those keeping score at home that's 2 tackles, 1 block, 2 clearances and 5 recoveries.

Of course the defensive side is a nice bonus to have from your main striker. But the real reason why Dallas has Perez on the roster is to score goals and lots of them. Thankfully he managed to score one under a lot of pressure. Would have been really easy to sky that shot, but Blas did well to settle the ball and put it on frame.

It's good to see Blas take cracks at goal from distance as it keeps defenses honest because when teams close him down, he can do this: 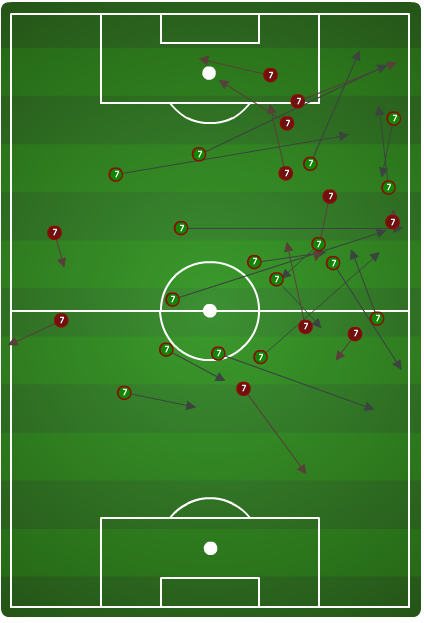 I couldn't isolate the passes but the ones that stood out the most were his passes out to the right wing to Zach Loyd. As we've said here all season, good things happen when we move the ball out wide. And Loyd had an excellent game as a wingback bombing up the right flank in support of the attack so it was good that he saw the ball often.

I didn't bother with a graphic, but Blas also won 3 fouls and didn't concede any and maybe most importantly didn't do much complaining at the referees. More of this type of complete performance would be a welcome sight for Dallas fans during this playoff push, especially with Mauro Diaz regaining fitness and Fabian Castillo coming back from suspension.