Down at the Copa: Finale

Share All sharing options for: Down at the Copa: Finale

Returning from two days in São Paulo, we felt much more at home in Rio. Lauren and I went down to the Copacabana Fan Fest to watch Germany vs. Ghana. There were Ghanaian girls next to us who had a hilarious celebration when Ghana scored to take the lead. They poked a tall German fan in front of us in the ribs and then shook their booties at him. Luckily, he found the humor in their dancing and laughed it off. 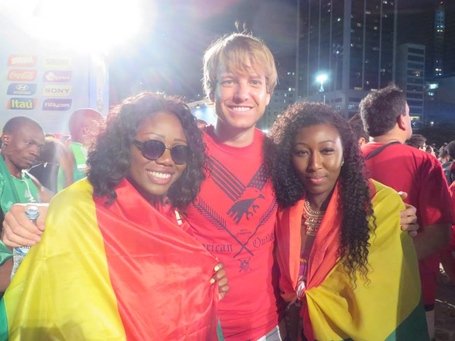 The next day, we saw Belgium vs. Russia. There's not much to say. It was boring. Russia played negatively and Belgium was lulled to sleep. From the 65th through the 85th minute, we booed every time the ball was passed backward or kicked out of bounds. I did learn the name "Divock Origi." 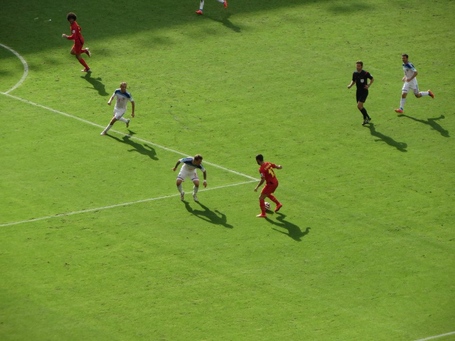 We hustled out of the stadium to make it down to the Copacabana Fan Fest for the USA vs. Portugal game. 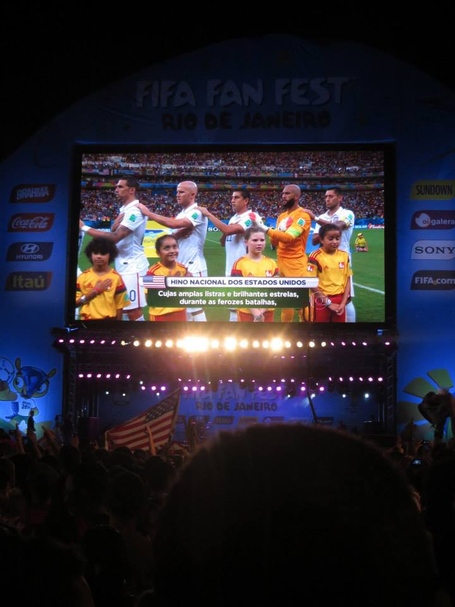 The mood was tense as the majority American crowd knew this was the most important game of the group stage. A win and we were through. After a few renditions of "I Believe," the mood turned from butterflies to belief. "We can do this" was the sentiment heard again and again on the sand. Then the reverse of the Ghana game happened - we were scored on early. It was a horrific mistake from Geoff Cameron. Did I jinx him by giving him a thumbs-up the day before? I brushed it off and instead chalked it up to him being an ex-Dynamo. At halftime, I had to sit down and stop trembling. It's not supposed to go like this.

Wasn't Jermaine Jones' goal incredible? It caught us by surprise. I piggybacked on my new friend from Birmingham, Scott Cole, with whom I exchanged American Outlaws scarves. I hugged and high-fived strangers, and could not stop bouncing up and down.

Only a few minutes later, we took the lead through Dempsey. The mood turned euphoric. We were through! You couldn't have imagined that DeAndre Yedlin would be having this big of an impact. I had stood three feet from him on the field in Seattle a month prior and now he has Portugal reeling in the World Cup! 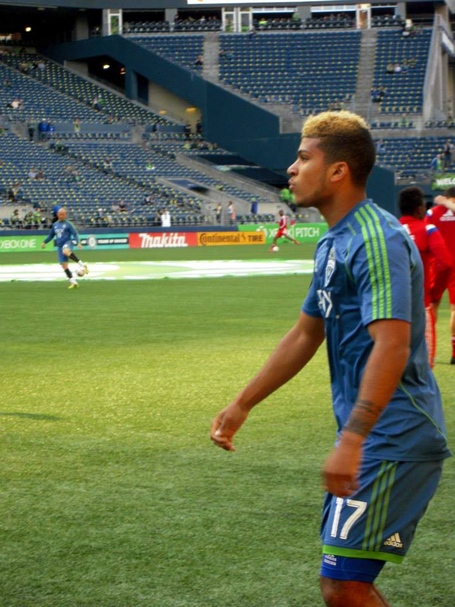 Now we were hanging on. When Omar Gonzalez was inserted, my heart raced faster. This back-5 experiment was a disaster in the warm-up against Turkey.  Sure enough, Gonzalez was caught upfield and Cameron forgot to mark Varela as Ronaldo decided he wanted to whip in an inch perfect pass in stoppage time.

We trudged off the sand with our heads down, dejected, telling ourselves that we still had 4 points. This was the plan! Beat Ghana, tie Portugal. But we felt like we could've had more. We could've been through!

The next day we hung out on the beach and played sand volleyball. We were watching Brazil vs. Cameroon on the big screen before we realized the bigger spectacle was behind us! 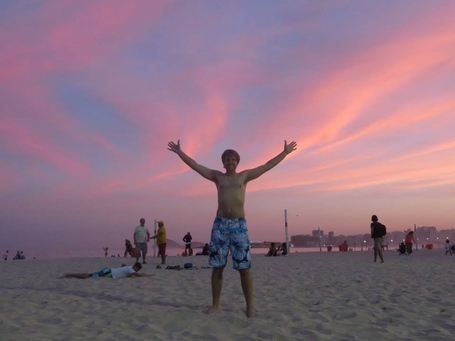 On the following day, we hired a tour guide, Ederson. We told him to take us to places in Rio where foreigners wouldn't have access without a guide. So, we started by going to the largest favela in Rio, Rocinha. They say that Rio is an upside-down city - the rich people live at sea level while the poor people live in the hills. We walked a block up the favela to see a glimpse of life there. It was dirty and smelly, but we didn't feel unsafe. Rocinha has an athletic center that Sturridge, Welbeck, and Lallana visited before the World Cup began. I bought a Flamengo beach towel from one of the shops. 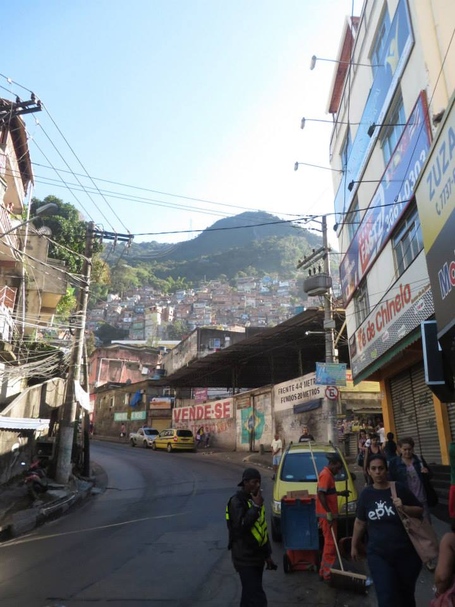 Ederson said that Rocinha isn't a typical favela because it is so huge, so he wanted to take us to another one. We went to Santa Marta, where they have a Michael Jackson statue to commemorate a music video he shot there. Lauren and I didn't make it up that far because the steps are steep and grueling. Here's what it's like to climb up a favela.

Next, Ederson took us to the Tijuca National Park, where we had a nice panoramic view of the city from the Chinese Lookout. We also saw the majestic Cascatinha (Waterfall) Taunay. There were monkeys and animals related to raccoons there. 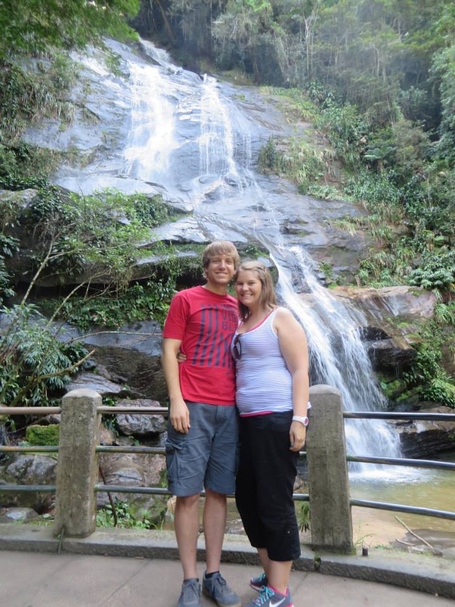 We drove downtown and saw the beautiful stained glass in the Metropolitan Cathedral. Next we took in the unique tiles of the Selaron Steps and found several from Texas! 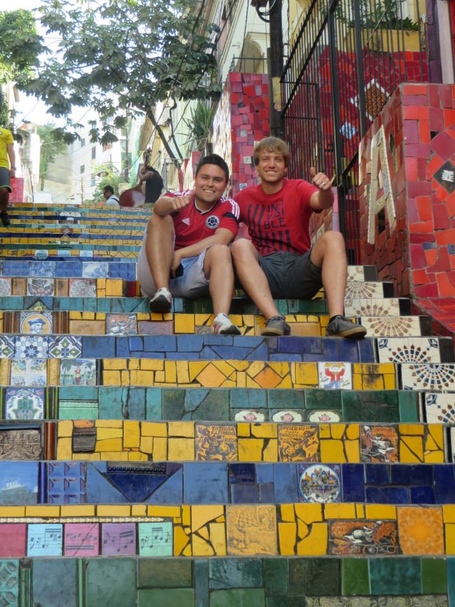 Ederson recommended a delicious seafood restaurant in the upscale neighborhood of Santa Teresa. We thanked him for a great day of sightseeing as he dropped us back at the apartment. That night we played more soccer on the beach where I picked up the unimaginative nickname of "Gringo."

The following day we walked along Ipanema, which is a gorgeous beach. Copacabana is very active, while on Ipanema everyone is lounging around and soaking up the sun. 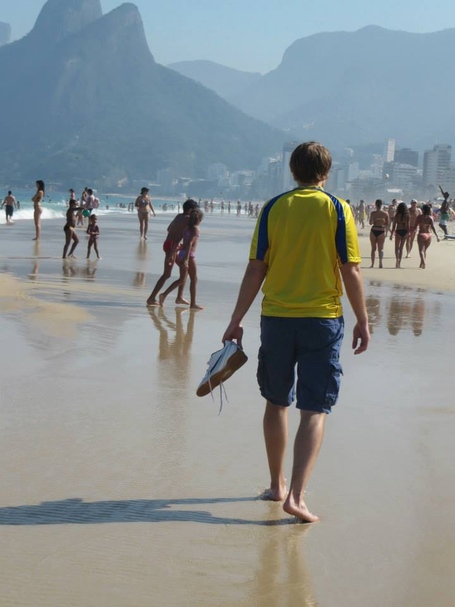 That night, we saw Ecuador and France play out a 0-0 draw. The highlight for me was watching my Ecuadorean friend Danny passionately sing the national anthem! 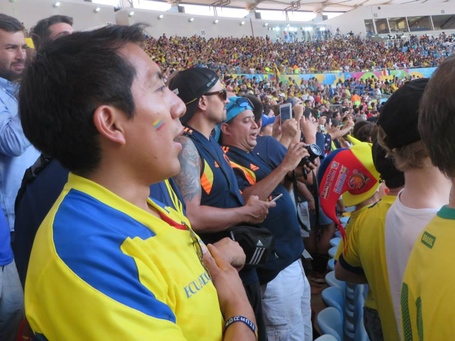 On the day of USA vs. Germany, we took our minds off worrying about the game and took a cable car up to Sugarloaf Mountain, which is located on the south-eastern corner of Rio. It has a breathtaking view of the city! 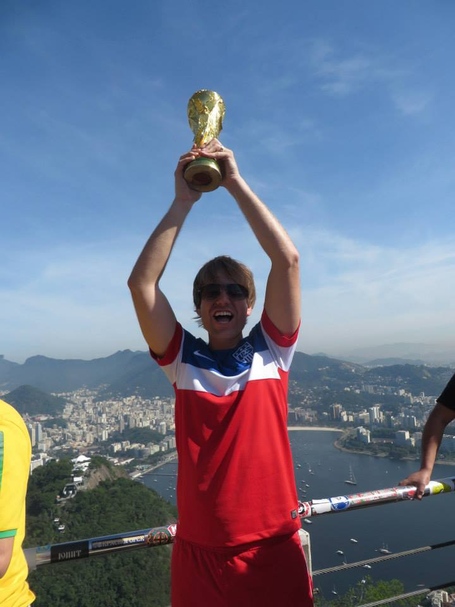 During the USA vs. Germany game on the beach at the Copacabana Fan Fest, we had an unexpected half-time guest - Ronaldo Fenomeno! 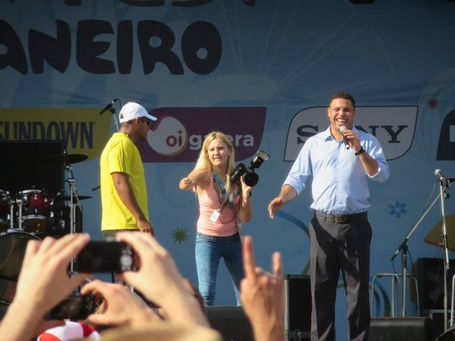 The loudest cheer during the game was when the news came across that the other Ronaldo had scored to put Portugal up and basically secure passage to the knockout round for the USA. We all exhaled a big sigh of relief. We can beat Belgium! We just saw them barely scrape by Russia!

Afterward, we watched a gorgeous sunset on Ipanema beach from Arpoador Rock. 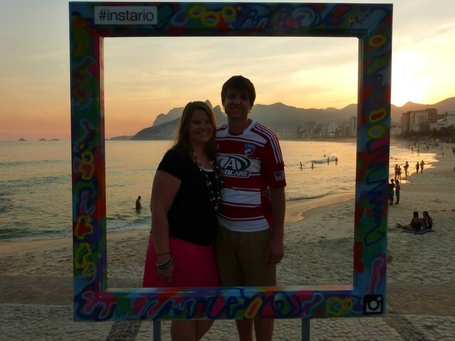 On our second-to-last day in Rio, we still had some sightseeing to do. We took the Corcovado Tram up the mountain to Cristo Redentor. Of course, I had to snap the iconic tourist photo... 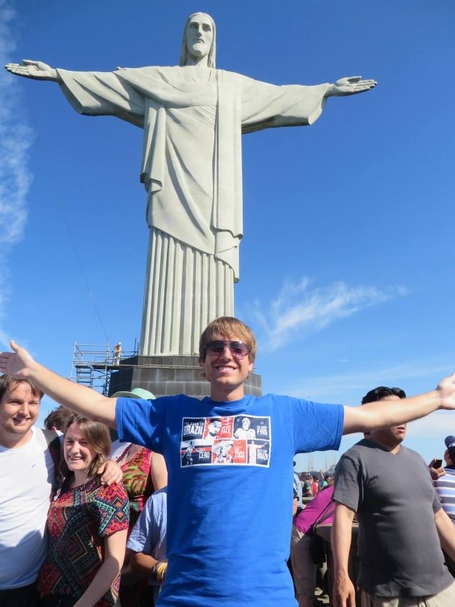 In the afternoon, we embarked on a 4-hour sailboat tour. This was the one event where we could get away from the crowds and relax. I laid out on the deck and took a nap. The captain let me steer for a while and help with the rigging. As we sailed back toward Sugarloaf, Cristo, and the marina, we watched a dazzling sunset over the city. 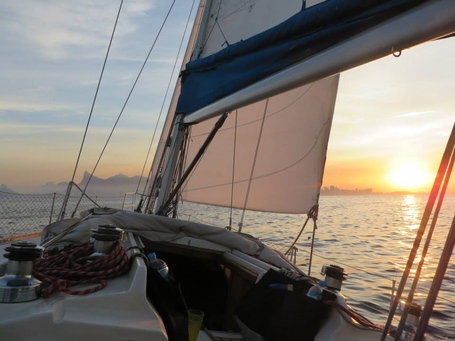 We ate at a churrascaria, or Brazilian barbecue. If you've eaten at Fogo de Chão or Texas de Brazil, it was similar. 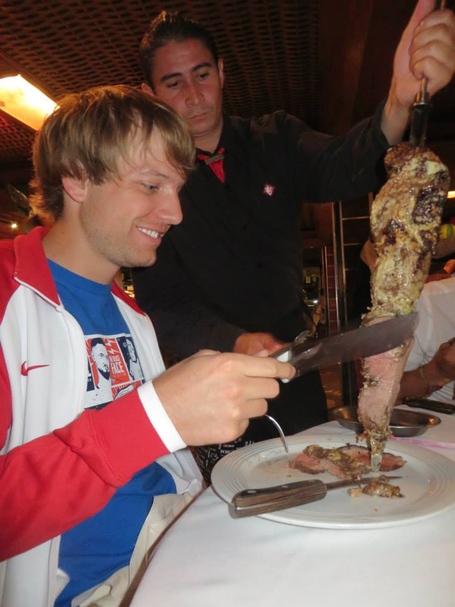 On our last day in Rio, we witnessed the best game yet: Colombia vs. Uruguay. James Rodriguez scored the goal of the tournament right in front of us! Lauren managed to snap a shot of the ball hitting the crossbar before bouncing in. 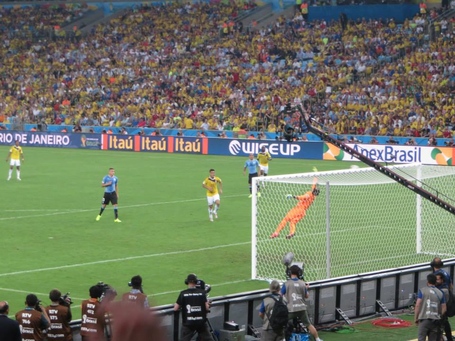 Just like Suarez, he ran to the corner flag in front of us to celebrate. 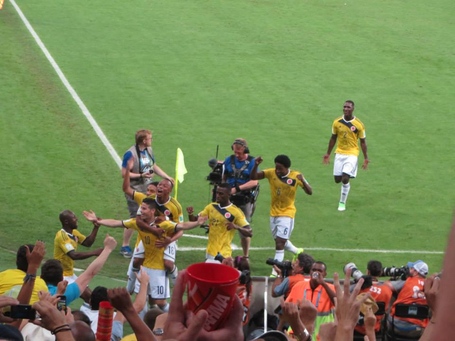 After the game, we celebrated by having drinks at the famous Copacabana Palace with someone you might recognize... 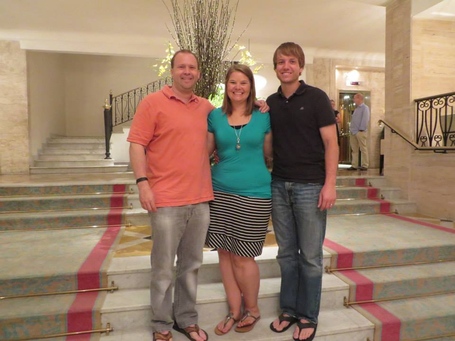 While I was sipping my caipirinha by the poolside, Dan asked, "Well, should we check the FC Dallas score?" Upon tapping his phone, a look of horror came across his face. "What, did we get another red card?" I mused. No, it was much worse than that. A Columbus fan had been struck and killed by lightning at the game. Wow... That put a somber twist on the evening.

Dan walked us out to the lobby to say goodbye. Before we left, he mentioned that he had to speak to his friend, Sunil. Sunil was standing in the lobby in unassuming clothes, wearing jeans and flip-flops like us. "Sunil," I repeated in my head. "I know who that is." I walked over with Dan and introduced myself. With a firm handshake, I said, "Nice to meet you, Sunil. I'm Phil." "Nice to meet you, Phil," he replied. "FC Dallas fan," Dan pointed at me to clarify. And that's the story of how I met the President of US Soccer at the Copacabana Palace.

The next day, our time in Rio was up and we embarked on the 19-hour journey back to Dallas. There is one last thing I'd like to share with you. I had a goal of taking a picture with fans of each of the 32 teams in the World Cup, and I did it! See if you can tell which country they represent. My favorite photo is with the French fans!

Editor markup for All 32 countries at the 2014 World Cup. This is only visible in the story editor.