Share All sharing options for: Around MLS: Revolution streaking, MLS friendlies and more

FC Dallas brushed the New England Revolution off their shoulders with a solid 2-0 win at home this week. Let's take a look at what else is happening around MLS.

The New England Revolution started off the season with one win, one tie, three losses, and only four points through five games. The next seven games were a different story. The Revs went seven games unbeaten with wins over Sporting Kansas City, Toronto FC, and a 5-0 thrashing of first place Seattle.

Now, the tide has changed big time. New England is streaking for the wrong reasons this time. The Revs have now gone seven games without a win, two of those losses coming from this past week.

Is there a weirder team in MLS? Teams like New England scare me. You never know what you're going to get from them week in and week out. Glad FC Dallas polished them off already.

Starting with Seattle vs Tottenham this past Saturday and ending with the MLS All-Stars (How did Landon Donovan make it over Dom Dwyer?) playing Bayern Munich on August 6th, there will be a total of 14 friendlies MLS teams will play in against European competition. That number is not even including the International Champions Cup. Check the full list out here.

It's a great chance to see top class clubs play live and in person. I'm taking full advantage of the opportunity. I convinced my father to take my brother, sister, and myself to Chicago to see LIverpool for the first time in person.

The 20-man roster will take on the Portland Timebers' U-23 squad on August 4th in the first ever Chipotle MLS Homegrown Game. 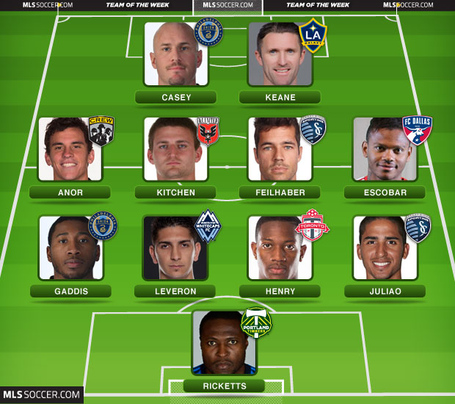 Benny Feilhaber is the Player of the Week.