View From the Beer Garden: The kids are alright

The FC Dallas youth movement and being one with the beer garden.

Share All sharing options for: View From the Beer Garden: The kids are alright

Can You Go Home Again?

This week, I watched the game by myself from the beer garden. I normally have my wife, or friends with me, but this time I went solo. Recently, the garden has felt different to me, like a friend that I once knew intimately but has slowly become a stranger to me. All we can talk about are the things we used to do, or the things we used to have in common. Sometimes that is okay. We need certain friends at certain times in our lives and then it’s good that they drift away from us. I didn’t want that to be my relationship with the Beer Garden, because I love the garden. It is where I most truly feel like the diehard fan that I am. It is the locus of all emotional output in Toyota Stadium and so, I came to this match hoping to rediscover my old friend.

I wanted to breathe in the atmosphere of the garden, feel the waving of the flags near my face, and smell the musty sourness of spilled bud light. I wanted to soak in the cheers, and be shorn by the jagged edges of the painful cries during a missed call. I wanted to BE the beer garden instead of just a participant in the reverie like I normally am. The beer garden is a special place to me. It has been where I have watched these beloved Hoops for the last four years. I have seen a litany of changes to the beer garden, larger stands, less tables, more supporters and less beer. It changes as we, the FC Dallas fans do. It reacts to us and we react to it, molding to us, melding to the game and moldering as the stadium ages. While it isn’t as pristine as it once was, nor is it as shiny and new as when the beer garden first arrived, it is home, and I feel like this year I have not felt as connected to it as I have in the past. It felt like something had changed, whether it was me, or my relationship to it, or even its relationship to me, I couldn’t place it.

It reminded me of coming back to my childhood home after I graduated from college. The place was the same as it always was, but I noticed things that I never noticed before, the worn floor boards and the creaking fragility of some of the doors. It was still a beautiful home that I loved, but it was no longer the castle that protected me, kept me safe. It no longer felt like MY home. It was my parent’s home.  I was afraid that that disconnect was happening to me and how I felt in the Beer Garden. Was it still my home?

I wanted to reintroduce myself to it, relearn the way the garden truly feels on a Saturday night, and I think that this week, I got that connection back. It felt good to be home.

The Kids are Alright

I watched as the players nervously gathered inside the tunnel, all shaking limbs and narrowed gazes. As they walked down the stairs and to the pitch, the white of their warm-up jackets was almost glowing under the lights of Toyota Stadium. Beyond that, I saw the attendees of the beer garden, beers in hand, but with an energy that belied the physiological effects of the depressants in their hands. Everyone was ready for this match. New England had a losing streak going, Los Toros had an unbeaten streak and the Garden was packed!

The game itself was delightful. Full of energy, competent passing and timely tackles, it seems like we are finally finding our footing again. The moment though that truly helped me see the game, and the team at this moment in time was actually after it had already finished.

I was milling about after the match near the tunnel, mostly due to how amped up I was about the result, and the players were slowly trickling back into the locker rooms. Players went by, gave high fives, accepted congratulations and occasionally stopped to give autographs. Then, Moises Hernandez came up the steps, about to follow what the other players had done. But then, he glanced behind him, and immediately his smile got even bigger than it already was. Oscar Pareja trotted up the steps, only to be bear hugged by Moises. Pareja shared some quiet words with him and they both went down line of fans shaking hands and listening to the supporters as we gushed about their performances.

That moment though stuck with me. Pareja has a connection with these players, specifically the Homegrown players, that I’m sure every coach in the league envies. The smile and the bear hug that Moises Hernandez gave to Papi wasn’t one generally reserved for one professional to another. It was one that I only see between a mentor and a mentee. Papi has been around this team almost since its inception (Let’s forget about his dalliance with Colorado), and has seen these players grow up to be the men they are. He has been there with them through those tough teenage years, and through the even tougher Schellas Hyndman years where barely any of them got playing time. Most importantly, all that time together seems to have led to them trusting each other. 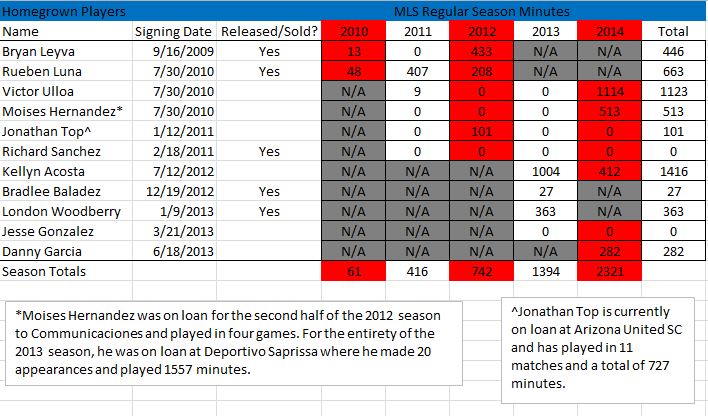 During Schellas Hyndman’s tenure as head coach, he played homegrown players for a total of 2,613 minutes in his 180 games as coach. In 20 games as head coach of FC Dallas, Oscar Pareja has played homegrown players 2,321 minutes. He almost equals Hyndman but with 160 games less. This year, homegrown players are averaging 116.05 minutes per game, while under Hyndman, they only averaged 14.52 minutes. It is clear that Pareja has more faith in homegrown players and it seems to have paid off. He has made Victor Ulloa a stalwart in midfield, Moises Hernandez a dependable backup, Kellyn Acosta into a starter, and even counted on Danny Garcia following Diaz’s injury. This can only make this team stronger. Along with relying upon homegrowns, he has also allowed Tesho Akindele the opportunity he has needed to grow into a potential candidate for Rookie of the Year.

Relying upon youth can be risky. If players don’t pan out, or if they can’t handle the increased workload, the season will be a disaster. But when it does work, we see a team that is infectious in its zeal for winning. We see a long future ahead of the team as the players grow and mature, and we see this spirit take hold of not just the other players, but the staff, the fans and the city itself.

Pareja knew that, but he also the players that he had at his disposal, and that has made all the difference.