It was against a slumping Revs team, but it was still an impressive performance for the Hoops.

So many talking points on this one. So many numbers, stats, analysis to cover. I'll do what I can and try to keep it brief, but whatever I say won't do justice to how incredible a team performance this was.

This is obvious. He was the most dangerous man the whole evening with his pace and stepovers. I mentioned this on Twitter after the match, but I was shocked at his heat map: 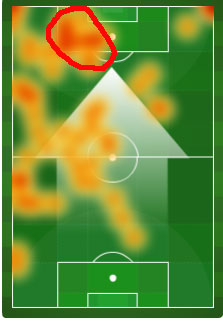 As a player, you never want to lose at the strength of the best player. You always want to make it some unlikely hero that's going to beat you and concentrate your efforts on shutting down the main attacking player. Clearly the Revs got this backwards and allowed Andres Escobar to get so many touches inside their own penalty box. Credit to Escobar for finding the gaps and the passing lanes, but the graphic below is also equally as ridiculous:

These are Escobar's dribble attempts inside the box. Granted he lost possession 3 out of 5 times, but he should never have been afforded those chances to begin with. The Revs should have forced him to pass, but clearly Escobar wasn't having any of it and was finding ways to unbalance the defense all night.

Yep. Including Je-Vaughn Watson for this one as well. As much as Zach Loyd earned and deserved all the accolades for his performance, Watson had a good hand in helping Loyd look good. First we'll take a look at Loyd and what he brought to the table. 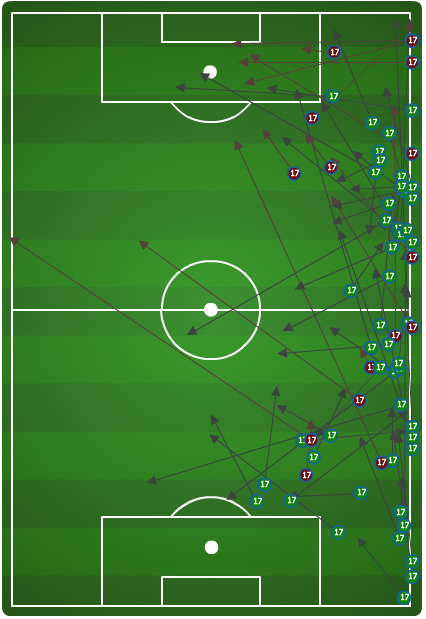 Loyd had a monster game manning the right flank. 46/62 in passing for the evening, including 3 key passes. On any given night that's pretty good, but it's even more impressive given the context of what he was working against.

Jay Heaps decided that the New England Revolution attack needed to go down their left hand side, and test Loyd. Most of the attack came down our right flank or the Revs left side. I think part of that has to do with Escobar and them wanting to try to keep numbers back to double up on him. Chris Tierney and Steve Neumann attempted 21% of New England's attack as you can see below. 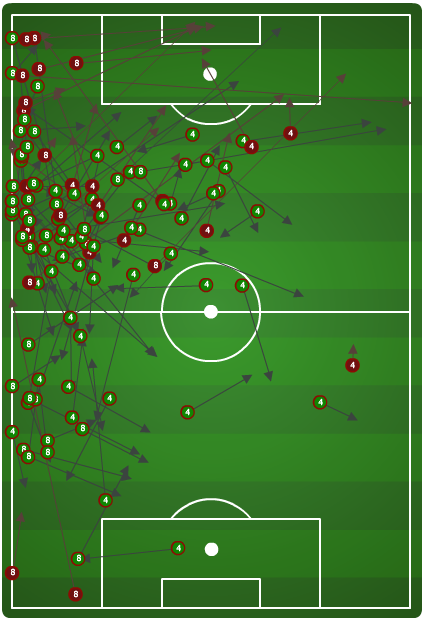 When you're faced with this kind of offense, you have two options: 1) Sit back and try to absorb the pressure or 2) roll the dice and attack the open space that's been vacated by the overlapping full back. Oscar Pareja and Dallas opted for option 2, which has its obvious drawbacks as it exposes your backline but thankfully things worked out for FC Dallas and the combination of Matt Hedges, Stephen Keel, Moises Hernandez and Victor Ulloa were able to snuff everything out.

So where does Watson come into play here? Well the first thing he has to do is remain honest and keep track of Chris Tierney. This doesn't mean man mark him, but he does have to be aware of his positioning and make decisions about when to track back. In doing that dirty work, he's vacated the whole right side for Loyd to exploit. Check out Watson's heat map: 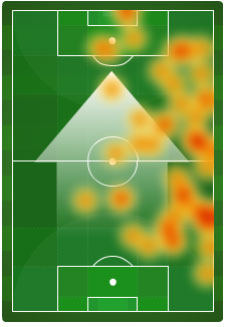 For someone who normally plays are more advanced winger type position, it's a little surprising to see how many touches he got inside his own half. That help enabled Loyd to pick his spots and exploit the exposes space. Watson didn't have the best of nights, but his work and commitment to the team should be commended.

Just to reiterate, the graphic below looks like a jumbled mess. But just make a note of how many more passes were completed on one side of the pitch versus the other. 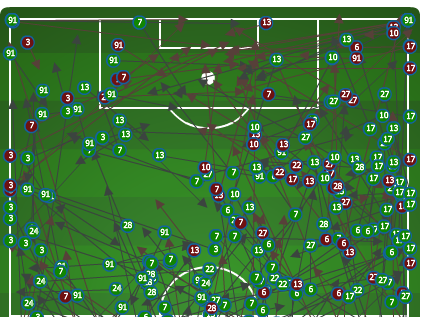 There was space to be exploited and Dallas did a good job of it.

Of course, you cannot counter the attack unless your defense has things under control. The graphic below is my favorite of the lot: 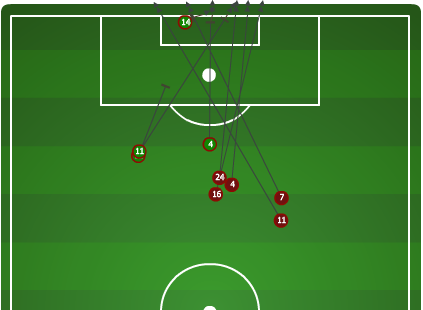 There was only one shot taken inside the penalty box, which was was from Diego Fagundez in the dying moments of the match. Everything else was coming from outside the box and from ridiculous ranges too. New England even only managed one measly shot in the entire first half, and not even on target for that matter.

Yes, this was against a team that's now on a 7 game losing streak, but this is MLS and anyone can beat up on anyone on any given day. And if Dallas is going to be serious contenders for the playoffs, they will need to put these kind of team performances together on a more consistent basis.