Down at the Copa: Part 3

Share All sharing options for: Down at the Copa: Part 3

The day after the Ghana game we set aside to go downtown and sightsee. What we didn't realize was that every government building was closed because the workers were on strike, trying to use the World Cup as leverage for a pay increase. We were later told by our tour guide that strikes by government workers are frequent and he has no sympathy for them. We weren't able to go in any buildings, like the Teatro Municipal or the Iglesia Candelaria, so we went to a famous chocolate shop. I had a brigadeiro, which is a famous Brazilian chocolate fudge truffle and Lauren had a banana turnover. 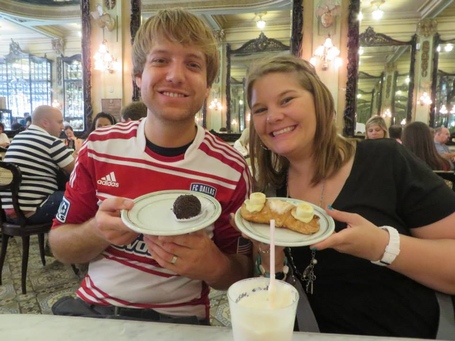 We climbed a huge hill to go to the São Bento Monastery. It was open since it is run by monks and not the government. The inside is incredibly ornate, but the dim light meant that pictures did not turn out very well. No-one was around except for a couple security guards. Apparently, on Sundays the monks perform Gregorian chant. 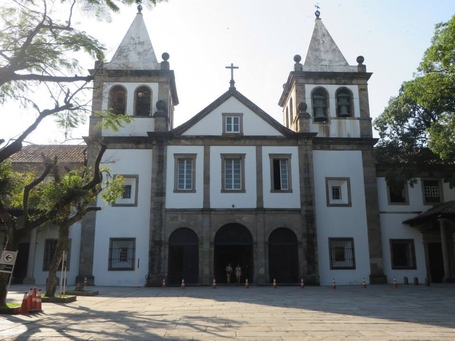 Walking around town all day left us tired, but somehow I still found the strength to play beach soccer on Copacabana that night. Beach soccer is exhausting. The sand is soft and deep, so every step requires re-balancing. The best strategy is to play long balls toward the goal and try to head them in - a style an American can grasp! We played 7v7 to 3 goals and the winner stayed on. My team of 4 Argentinians, 2 Americans, and a Colombian won 5 straight and I scored 7 of our 15 goals! 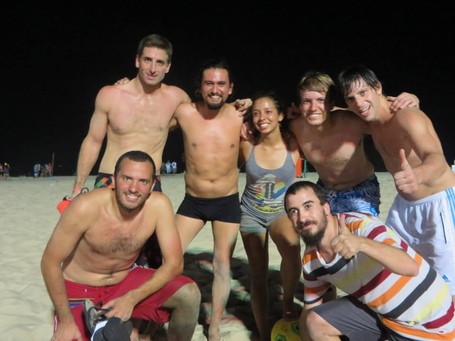 The next day, we went to Spain vs. Chile at the Maracanã. My friend Josh spent 6 years living in Santiago, so I helped paint his face like the Chilean flag. I have been a huge fan of tiki-taka, but Josh bought me a Chile shirt and made me promise I would cheer for Chile. It was the right choice, as we watched Chile eliminate a flaccid Spain in front of a raucous Chilean crowd.

If you recall, this was the game where the Chilean fans stormed the media checkpoint. We had no idea this occurred until later that night. We were told by a journalist that the media center was actually in a garage, so the Chileans had nowhere to run. 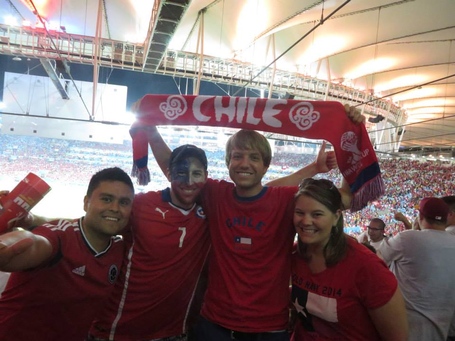 Early the next morning, we took the 2:45am bus from Rio to São Paulo and arrived at 9am. Our downtown hotel let us check in early, so we got a quick nap before heading out to the São Paulo Fan Fest for the Colombia vs. Ivory Coast game. I managed to snap a picture with the one Ivory Coast fan in the crowd! 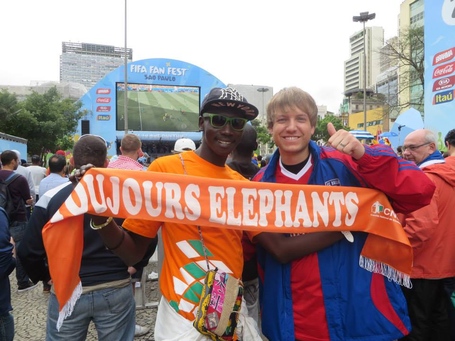 We couldn't stay for the end because we had to get to Corinthians Stadium for the England vs. Uruguay game! Our seats were 20 rows up behind one of the goals. While the Maracanã is an Olympic-style soccer stadium, the stadium in São Paulo is reminiscent of a college football stadium, with its square, tiered design. 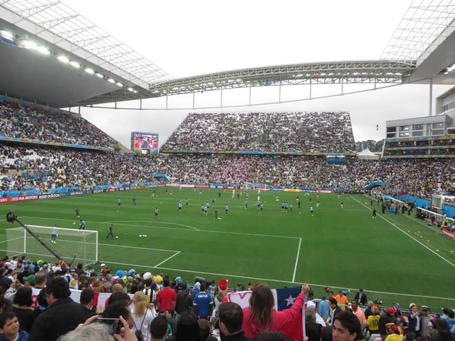 Having lost their first games, this was do-or-die for both countries. Suarez's return from knee surgery gave Uruguay a noticeable boost. In the first half, Uruguay dominated and a magnificent chip from Cavani gave Suarez enough room to head the ball into the side of the goal. 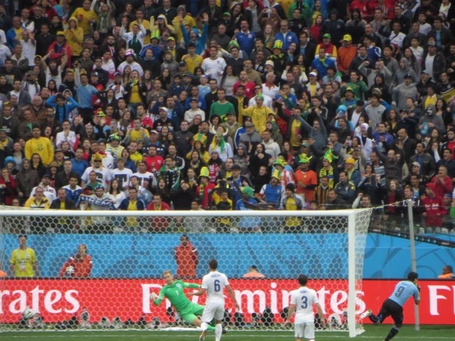 England managed to pull one back in the 75th minute as Glen Johnson broke down the right side and played the perfect cross to Rooney to tap in at the back post. I didn't get a shot of the goal, so here's a cool shot of Caceres chasing down Welbeck instead. 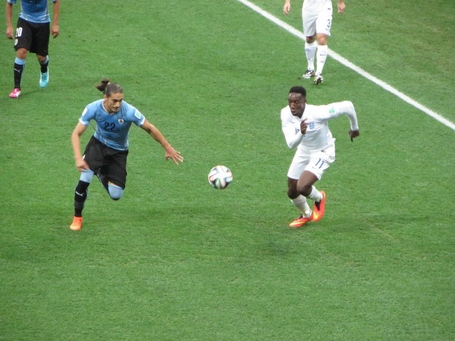 England's equalizer didn't keep the score level for long, as Suarez again proved to be the hero and the villain. A long ball out of the back skimmed off Gerrard's head, giving him yet another "assist" to Luis Suarez. Luis didn't miss, powering the ball past Hart into the roof of the net and then celebrating right in front of us. Yeah, he knows he's good. 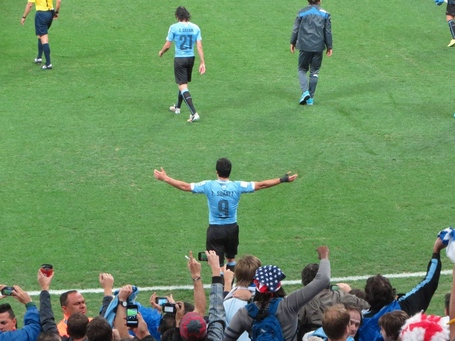 We spent our second night in the hotel in downtown São Paulo. The party on the block in front of our hotel went all night, but still we woke up early to try and catch a glimpse of the US team at the São Paulo FC training ground. We knew that they would be training, but didn't know at what time. We figured it probably wouldn't be open to the public but thought we might at least see the bus. That's exactly what happened. Geoff Cameron returned my thumbs up and Kyle Beckerman waved at Josh.

We were interviewed by Brazilian and Hungarian reporters, and I yelled at Wiebe as he walked into the press conference. 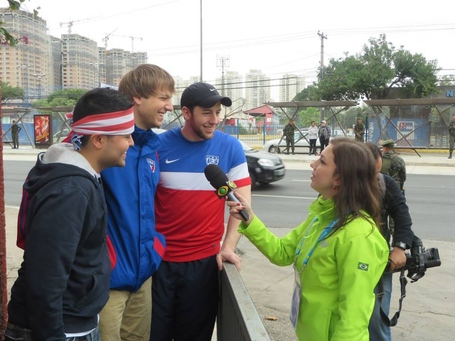 The only other fans waiting at the gate with us were a mother and her two kids. They lived in Minneapolis for 7 years before moving back to her hometown of São Paulo 7 years ago. She operates an English and Spanish language school. Her son, Philip, is the goalie for the U15 team at Nacional, a 4th division team whose stadium is across the street from the São Paulo FC training ground. They were very generous to give us a tour of the stadium! I told Philip that he should come to Dallas because our facilities are much nicer. He said he would love to play in the USA. 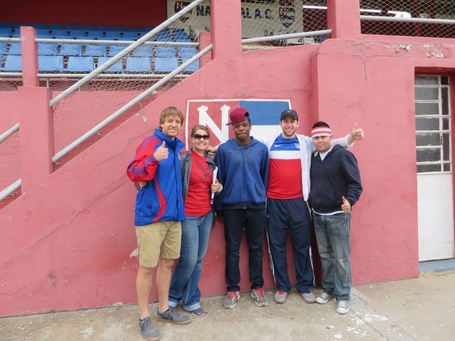 We did some sightseeing in São Paulo that afternoon. First we went to the Municipal Market, which had a large variety of meat and produce but not much for tourists. Then we went to the 41st floor of the Italian Tower to get a good view of the city. São Paulo is the largest city in the Southern Hemisphere with 12 million people! It's a very dirty, industrial city that is covered in graffiti. I wouldn't recommend vacationing there. 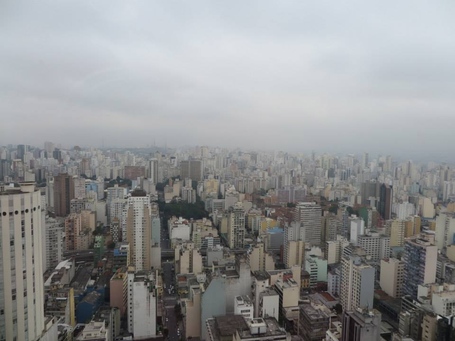 That night, we checked out Avenida Paulista, which is like Rodeo Drive with expensive handbags and shoes. The next morning we took the 7am bus back to Rio.