Scratching the Chalkboard: Where did New England's goals go?

Once an unstoppable force, now a complete dud. What happened to the Revs?

Share All sharing options for: Scratching the Chalkboard: Where did New England's goals go?

*Note that this was written before the Revolution played the Galaxy last night.

If you didn't know this already from being a fan of the league, you know it now. MLS is a very competetive league. With the exception of the Seattle Sounders at the moment, no team been able to sustain a significant run of victories before petering out at some point. The results map found on the MLS website paints the picture well. (Even Chivas USA has put together a string of four consecutive victories!) 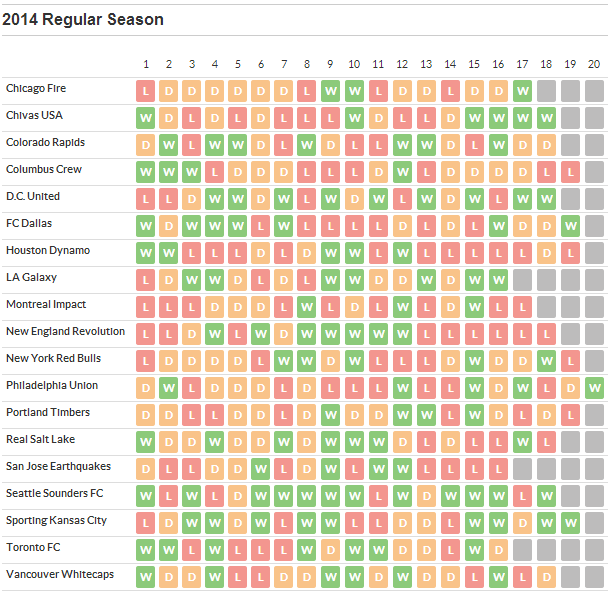 The New England Revolution roll into town on a six game losing streak but before the wheels came off they were riding high on a five game winning streak, which coincidentally included a 5-0 smackdown of the league leaders Seattle Sounders. So what happened? And which version might we see this Saturday?

When goals dry up for a player or for a team, the first thing I look for are shots. There's more to it than just volume of shots as not every shot is created equal, but it's a good starting point. Here's what the Revolution have done:

*Stats above do not include last night's match against the Galaxy.

2013 was the breakout year for Diego Fagundez, with many of us salivating over the thought of him becoming an US citizen and wearing the red white and blue of the USMNT. 2014 has been an extreme let down for the promising teenager compared to his previous year. He's already nearing his shot output for the entire 2013 campaign and has only scored roughly a third of the goals.

I took a quick look at this xGoals numbers from American Soccer Analysis to do a comparison and found this to be rather interesting:

So he's actually closer to what's expected from his shot output. (xG of 4.66, scoring 4 goals in the process.) Right now the question for Fagundez is was he just lucky in 2013 or is he having an unlucky 2014? Not enough data to answer that at the moment, but make no mistake that he's underperforming (in terms of goal output) compared to last season.

I love looking up stats and trying to find trends. The problem is that many times I'll end up on some crazy rabit trail without discovering anything. This time though, I think I struck something useful for a change. If Dallas wants to play the game of probability and stack the odds in their favor for securing points from this match, they need to score first. I suspect part of the reason why New England's been shooting so much and so poorly during this losing spell is because they are chasing the game and trying to get back in it. (I didn't have time to compare their shot volume depending on game stats, but maybe someday I will.)

I found that the Revs were only able to pull a result of any kind (win or draw) from a losing position only twice this season. (4/19 v Chicago for 1-1 draw and 5/3 v Toronto for 2-1 win.) Once they fall behind, they tend to stay behind. The flip side of course is true in that once they secure a lead, it's unlikely they'll squander it either.

It's always advantageous to score goals in the game of soccer, but this Saturday it may be more favorable for FC Dallas to do so first and then play to protect the lead as it looks highly probable that New England are unable to pay themselves out of losing positions.