Scratching the Chalkboard: Defense Too?

The FCD offense looks to be back, but is the defense also coming together at the same time?

Share All sharing options for: Scratching the Chalkboard: Defense Too?

I wrote about the Dallas defense back in April and the concern for the lack of clean sheets that this team was putting up. Sadly the offense did dry up with injuries to everyone under the sun, and the defense was still sorting themselves out which led to an unfortunate 8 game winless streak. But now with the team looking healthy again, and offense starting to tick up, the defense has started to keep pace and is doing a better job of locking things down. So here are some statistics on how things have been for the Dallas back line.

He was getting a few calls for an USMNT call up early in the season, but once the wheels fell off, those calls have gone silent. Despite the terrible run of form from FC Dallas, Matt Hedges continued to be a defensive stalwart for the team. At Squawka.com, Hedges ranks 7th among defenders in their performance score per 90 minutes (min of 10 games). 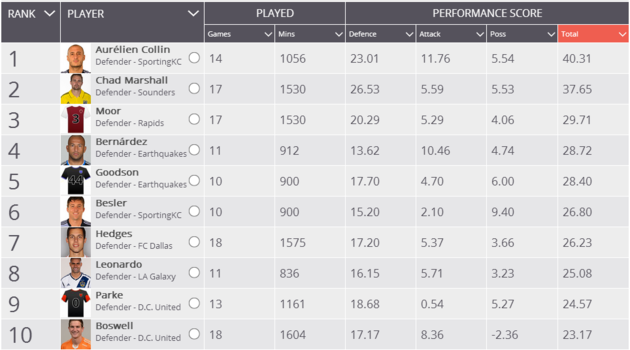 In the absence of George John, Hedges has had to step up his defensive responsibilities, mostly as a leader of the team and has started to do well to organize the defense and snuff out as many attacks as possible. He is also combining well with his defensive partner Stephen Keel over the season. They are completely different defenders but their styles blend well with one another and seems as though they are able to bring the best out of one another. 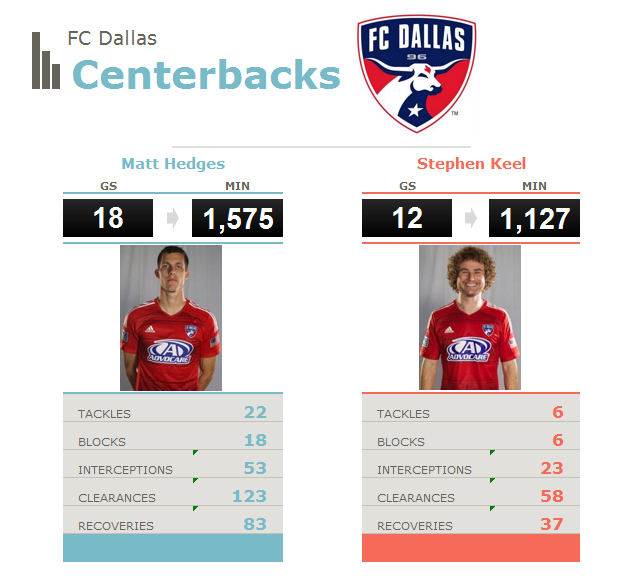 Just because Hedges has logged more defensive actions than Keel doesn't mean one is necessarily better than the other. Their partnership requires a lot of give and take and positional teamwork. Best comparison I can think of would be to liken them to the Dallas Cowboys back when Darren Woodson and and Roy Williams were the starting safeties. Woodson was so good at covering receivers down field, that it freed Williams to roam and make the tackles. Not a perfect comparison, but we're seeing something similar here.

Keel is very, very rarely out of position and does more of the "coverage" defense so to speak between the two which allows Hedges to step and make the tackles, interceptions and recoveries. This of course doesn't mean Hedges is only as good as Keel allows him to be, as it was with Woodson-Williams. In fact, the opposite is true that Keel's talents are brought out because of Hedges'. Tackling and intercepting require a lot of skill, timing and anticipation and because Hedges can do those very well, it allows Keel to stay within his strengths of simply taking up sound defensive positions and not having to try to make too many tackles.

It's no surprise that Dallas has only conceded one goal in the last two matches, with that one coming off a mental mistake from Victor Ulloa thanks in part of the Hedges-Keel partnership. Dallas could definitely use another body in CB as George John looks to be done for the season, but at least the team is in good hands for now.

I made a comment on Twitter a few months back that I considered Zach Loyd to be the starting right back over Kellyn Acosta. There were some disagreements, which I understood, but Loyd was entering the prime of career where Acosta was still relying on raw talent. Make no mistake that I rate Acosta very highly and expect him to be in consideration for 2018 and 2022 USMNT, but right at this moment, Zach Loyd has the edge as he's reached the point where his athleticism and veteran savvy have reached an apex.

He is 5th in the league (among defenders) in tackles per 90 at 2.58. The astounding thing is the percentage point next to that stat which indicates his success rate. I had to scroll down the list to the 43rd position to find someone who had a higher success rate than Loyd (it's Heath Pearce in case you're wondering).

Acosta will see his time on the pitch, but at the moment the position is Loyd's and barring that one disastrous red card against DC in April, he's been a steady servant manning that right flank.

You may have noticed that I didn't pull up a single chalkboard for this post, despite the series title. This was slightly intentional to ask for some help from you. Earlier this season, MLS did a redesign of the their Matchcenter and in doing so, they cut off direct access to the old Chalkboard that I prefer to use. The new version is less informative and lacks a lot of data that is helpful for my vantage point.

(I can still access the old Chalkboard manually, but it looks to be phasing out and sometimes the data won't be there for several days after the games, which makes it difficult to do any writing without the data.)

If you could be so inclined to help me, could you spare 30 seconds to click on this link and to vote in favor of what's being suggested here? It simply asks for the MLS Digital Team to consider adding back the data that was on the old Chalkboard to the new one (goal mouth location, body part for the shot taken). I also included a suggestion to include the number count for shots and passes, etc. I like numbers, but I'm not a fan of having to manually count the 48 passes Mauro Diaz made.

You get to cast up to 10 votes, and up to 3 votes per topic. If you have no pressing issue to take up with the MLS Digital Team, I would really appreciate it if you used all 3 votes on this one issue. This would help me tremendously to continue to write for BigDSoccer. Without it, I might have to resort to posting pictures of cats and nobody likes cats....