First off, how about those Hoops! Two more wins and Papa Lamar's trophy will be home. Honestly, if we can stay healthy, this version of FC Dallas looks prime to win it's first cup title in first 17 years. Can we manage avoiding injuries for a change?

Almost a week after getting back from the Southern Hemisphere, I am still mentally exhausted. Sure, the 27 hours of flight and waiting for flight have drained my brain; but almost six days later, I'm thinking the heat, humidity, and two full weeks of breaking bread in a decaying seat of commodity-based wealth have stressed my faculties more than jet lag. It's a wonder the Yanks fought so valiantly after drawing Portugal in the Arena da Amazonas (aka 'The Big Crockpot'). Due to some travel difficulties, we ended up spending our whole trip in Manaus and the surrounding floresta. That said it was an excellent trip, and if you're a single man with an interest in ecology, you better get your butt down there while the weather's nice. 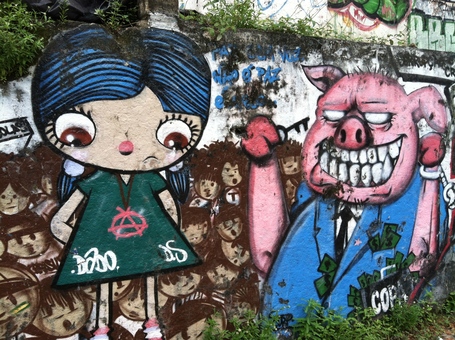 Manaus, like many parts of Brazil, are rich in authorized and intricate street graffiti. Given the stratification of wealth and limited services for the working classes, strong imagery like this was ubiquitous. I saw a television ad for the Brazilian Communist Party while I was there providing (I think, my Portuguese is woeful) a rather softened version of international worker's revolt. No matter your leanings, you couldn't help but feel a little sympathetic for the poor locals when you saw some of the waterlogged dwellings near the Rio Negro passing as shelter.

And yet, it was an extremely happy place. Everyone was extremely friendly, ironically perhaps because our porcine friend did bring the Cup to this remote corner of Brazil. The plaza near Manaus's famous opera house was packed with people every night we were there, and we made friends with several locals when we went out for our nightly caprinha. It would be interesting to see to what extent the overall mood of the town diminishes after an ultimately disappointing World Cup. For me, it is hard to believe that there isn't a genuinely positive vibe there despite being far removed from the wealth brought by the rubber monopoly of the late 19th and early 20th centuries. 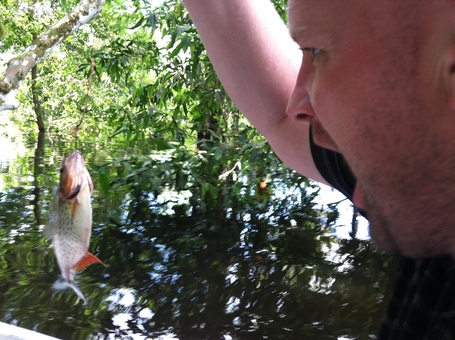 That my friends, is a piranha. As it turns out, I am a decent static line fisherman, pulling two of these out of the Rio Negro in a little under an hour. I debated throwing up the picture of my back with dozens of mosquito bites, but the piranha seemed a tad more compelling.

Manaus is the stop over for the ecotourist, so we wondered off into the jungle for a few days. If you're a fan of the outdoors in general, this is must for the bucket list. Between the glowing eyes of the local gators (specifically, Black Caimans), river dolphins, easy fishing, untainted beauty, it was a real treat to pair this up with a World Cup game.

The Amazon drains more water to the sea than the Nile and Mississippi rivers...combined...by a factor of 10.  More than a thousand miles from the Atlantic, the river is already 5 miles wide, and the abundance of life will either humble you or eat you alive. No collection of words or anecdotes will do justice to the basin's majesty. Conversely, if you are a control freak or have no interest in the wilds of this world, you can definitely give Manaus a miss.

Finally, I have to touch on the women. They were absolutely gorgeous. The photo example I was going to use in this article is on a laptop in transit and was taken my girlfriend. It was a picture of a foxy nurse wearing a pair of form-fitting scrubs taken by my girl to antagonize her co-workers who are nurses wearing glorified pajamas.  "This is what real nurses look like," she said.  "Wow, 90% of these women are '10's'," she added. This is not an exaggeration.

It was at this point in our trip that I pulled her aside to ask her if she was enjoying our vacation. She went on about all of the things I've touched on in this scribbling and said that it was her best vacation ever. I am by no means rich. I had to save up for a while to make this trip happen, and we did have to make a few sacrifices leading up to the trip and did not get to do everything we wanted to do on this trip. She even offered to fore go the trip so that I might have more funds at my disposal to travel within Brazil and see more games. She asked me if I was glad that I brought her along.

"Baby, I brought you because I knew you would get a kick out of this. That said, I also knew that if I did this trip on my own, I knew I wouldn't have a girlfriend anymore when I got home." There is a legend about why the women in Texas are so good looking. As the fable goes, the frontiersmen who poured into Texas in the early 19th century found a paucity of women in the new territory. When they got established, they went back east and took the women from the Atlantic brothels as their brides, and the result was generations of gorgeous women which we see to this day. Take it from my girlfriend, Texas has nothing on Manaus, let alone the rest of Brazil. If you're single, do yourself a few favors- save a few bucks, get your shots, learn Portuguese, and head South.

In the end, it had to be Manaus. The environment was exciting. It was brutally hot. Everyone was thriving and bullish on the future. Success was imminent. We were surrounded by beauty, both tangible and ethereal. Amazing promise abounded and made you happy to be alive in that moment...and then Cristian Ronaldo had to go and ruin it all. Ultimately frustrating, you cheered the best, lamented the worst with sobriety, and were left with hope that it would all work out for the best.

As it turned out, it did have a happy ending. Sure, it wasn't the happy ending that you wanted, but Fate's version of perfection rarely syncs up with yours. Tim Howard was singularly amazing. The US advanced from the Group of Death.  Manaus re-captured some of its former glory for a good month, and we made it home. Brazil as a country has to tackle difficult questions, footballing and otherwise, but they reflected the spotlight with aplomb. We have every reason to be optimistic about the future if we can only fix FIFA.