How good has Akindele been for FCD? Let's compare his stats with Super Raton.

Share All sharing options for: Scratching the Chalkboard: Blas Perez 2.0

It may have taken nearly two months into the season for Tesho Akindele to get his first start, but the wait was certainly well worth it as he's starting to show the Dallas faithful, his teammates and the league why Oscar Pareja rated the Colorado School of Mines alum. Though not exactly the same type of player, Akindele is replicating Blas Perez' MLS career in similar fashion and if he continues to develop, FC Dallas will have a real dangerous goal scoring threat on their hands for years to come. 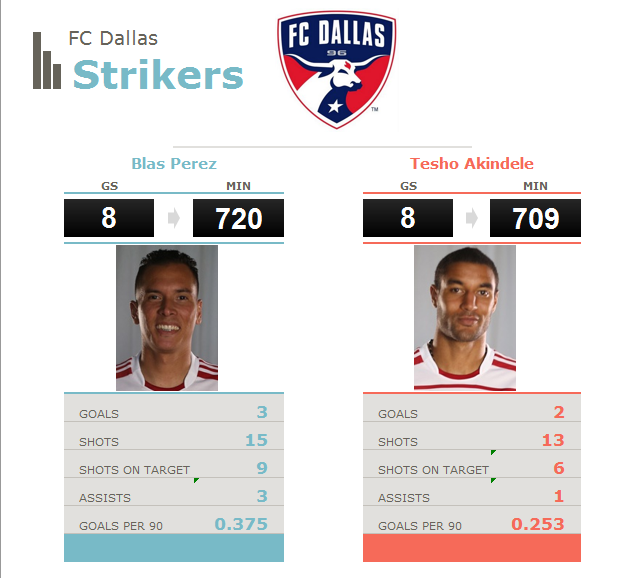 I am comparing Blas' first 8 starts in MLS to Tesho's first 8 MLS starts here. Obviously things are not like for like as Perez was a seasoned veteran at that point when he made his FC Dallas debut in 2012. He was also a Panamanian international at that point, having played in Gold Cups and World Cup qualifying. So when he entered the league, he was no rookie. Which makes Tesho's first 8 league starts all the more interesting. Akindele's statistically obviously isn't as proficient as Perez was, but considering he's a rookie, makes him a very interesting and promising prospect. 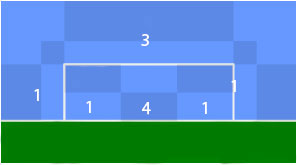 I really wish I had time to dig up Blas' first 13 shots for comparison, but we'll make do here. Akindele has taken 13 shots up until this point. The graphic above shows roughly where he hits the goal mouth location. (Not accounted for are the two shots that he's taken that were blocked by a defender.) It's good to see that he doesn't miss much (4) and that a majority of his shots are low (6), which are indicators of a quality striker who is placing his shot. He could do better at trying to get more shots into the corners of the goal more, but Akindele isn't trying to blast the ball into the net (typical of young forwards). The result of which typically means more skied shots and missed opportunities. It's good to see he's not wasteful with his chances.

I'm a bit of nerd, so thanks for humoring the 2.0 reference. This isn't an indicator that Akindele should replace Perez or that he's better than Blas.  They're not even the same type of player, but perfect complements to one another where Perez is stronger with his back to goal and Akindele has a bit more pace in his game. But the numbers were so similar to the start of both their FCD careers that I had to a comparison for the fun of it. They're both good, quality players and Dallas is fortunate to have both on the roster at the same time. I for one am really enjoying their partnership together and by the look of things, I imagine y'all are too.