Scratching the Chalkboard: Signs of Growth

Wasn't pretty, but there were plenty of positives from last Sunday's match

Share All sharing options for: Scratching the Chalkboard: Signs of Growth

FC Dallas picked up a vital point on the road last Sunday, giving the Hoops an undefeated month in June in all competitions. Even though the match was certainly winnable, after a disastrous month of May, a point on the road with all the suspensions and injuries is certainly welcomed around these parts. The match wasn't pretty and there were many missed chances, but the team is starting to play just that: like a team. Regardless of who's missing in the lineup for whatever reason, it's great to see everyone just step up and do their part without complaint.

He received Man of the Match accolades here at BigD, and while there's some scrutiny over a striker getting the award after missing some sitters that could have secured the three points for the team, he's certainly grown as a player and is developing into a reliable striking force on his own. The official MLS lineups had this as a two striker formation for the Hoops, but from my view Tesho Akindele played alone up top for most of the night - a lot to ask of a rookie who logged 120 minutes just a few days earlier. 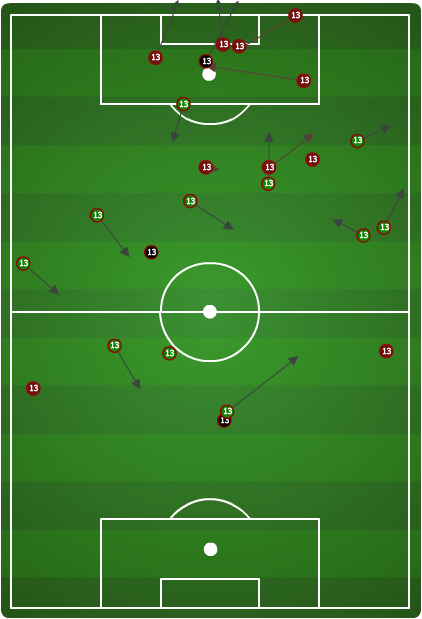 These are all of Tesho's touches from the match. The first and probably most obvious observation is how many times he was in the penalty box with the ball. Yes, he missed some quality chances to bag a few goals for himself, but being in the right positions to get on the ball are signs of smart decision making. Akindele's touch deserted him when he needed it most, but that comes from being gassed and tired. If he continues to make the right decisions, the goals will come.

The second observation is how Tesho moved side to side outside the penalty area to help facilitate the attack, but then focused with his task on hand of being a target and didn't register a touch outside the box once in the final 18. That takes a lot of discipline, especially for a player who didn't see the ball that much, as the tendency is to drift wide to get the ball, but then vacates his position and doesn't give his teammates a target to aim for. I'm assuming much of this was done by design and credit to Akindele for following his coaches game plan. 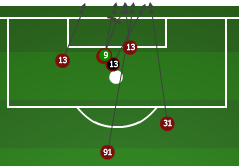 This is particular painful to put up as it highlights how close Dallas was from scoring, but again,  credit needs to go to FCD for taking high quality shots. There weren't many, but of the 7 shots taken 5 came from inside the penalty box. There were several sequences where I was glad Zach Loyd didn't just whip in a hopeful cross into the box or Andres Escobar just take a whack at the ball for a shot on goal. Both players and the entire team really, took their time and cycled the ball around until they found a better and higher percentage chance.These are signs of a team growing, maturing and learning to be patient with their chances. Quality chances over quantity and the law of averages over the course of the season will see those chances resulting in goals.

Yes, Dallas was outshot 10-7, but look at the difference in terms of quality. Only four of the Columbus Crew's shots came from inside the box with Hector Jimenez' effort coming from an odd angle. Yes, Jairo Arrieta should have scored in the 84th minute when he was sitting just inside the six yard box, but look at the all the other shots that were taken. Outside of the box, from a great distance and pretty central - giving Chris Seitz an easy visual to make the stop if the shots weren't already blocked.

This is ridiculous that we have to note this, but it is certainly noteworthy that not a single Dallas player came away with a card. Dallas has accumulated a total of 35 yellow cards in 2014, an average of nearly 2 (1.94 to be exact) per match. The only other time FCD walked away without seeing a card was back in 4/19 against Toronto FC. Here's to more matches where the the defense holds and the players remain their discipline too.