Around MLS: Transfer news, MLS at the World Cup, and more

Transfer season is heating up around MLS and around the world.

Share All sharing options for: Around MLS: Transfer news, MLS at the World Cup, and more

Well, FC Dallas lost again Saturday. Let's take a look at what else is happening around MLS.

David Villa has signed with New York City FC, becoming the club's first ever player. Who else could be on their way to NYCFC? If the rumors are true, Frank Lampard will be the next superstar to sign with the new club. NYCFC already making BIG moves before their inaugural 2015 season.

In other news, Sporting Kansas City have sold midfielder Uri Rosell to Sporting CP for an undisclosed fee. Sporting CP is the same club Seattle loaned, and eventually sold Fredy Montero to.

Taylor Twellman tweeted Monday that the Portland Timbers have offered former Manchester City defender Joleon Lescott a multi-million dollar deal to lure him to Portland. Will it be enough to out-weigh the fact that the turf that will be hard on his legs? Time will tell.

MLS at the World Cup

Here's a list of players in the MLS that are heading to the World Cup.

The game you need to be watching this week is Real Salt Lake at home versus Portland.

RSL is coming off their first loss of the season and Portland are starting to heat up. The atmosphere at the Rio Tinto will be crazy as always. Javier Morales vs Diego Valeri will be a great battle to watch throughout the game. Don't miss this! 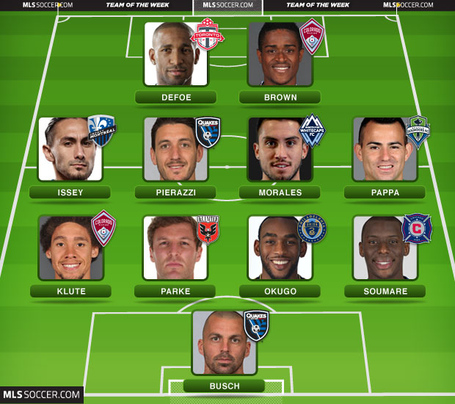 Deshorn Brown was named Player of the Week.

Vote for Player of the Month for May here.