So how do you stop Crew's own Mauro Diaz? Maybe invite him to shoot.

The Columbus Crew captain needs no introduction to those of us who've had the privilege of watching him play. The Argentinian playmaker heralds from the same fabled River Plate academy as Dallas' own playmaker, Mauro Diaz. In essence, they are cut from the same cloth: wonderful to watch on the ball, incredible vision, sublime first touch and blessed with jaw dropping passing abilities. In the two previous years Higuain has plied his trade here in MLS, he was deployed as a forward, scoring and creating goals with ease. But in 2014, he has been positioned a little deeper and rather than leading the attack, he's now facilitating the Crew offense from almost the midfield position. It's hard to describe, but it's like he's now a hybrid between an attacking midfielder and a withdrawn forward. All this to say, Dallas will have their hands full trying to track him and keep him contained.

Federico Higuain has attempted 27 shots so far this season, putting 11 on target and burying 6 for goals. That's 40% of his shots on frame, and then 55% of his shots on target going into the goal. He is simply a very good shooter but like every player, they have their tendencies and weaknesses to exploit.

Of the 27 shots, 16 have come from outside the penalty area and only one has resulted in a goal. Half of them missed the goal, four have been blocked, and the rest saved. As dangerous as it sounds to openly invite a good shooter to take a shot at your own goal, Dallas might be better served playing the statistical odds here and just let him take a shot from distance as only one has resulted in an actual goal. It's definitely playing with fire, but might be worth trying once in a while to get the ball back in Dallas' possession.

Not that this is a surprise, but Higuain is everywhere and has the license to roam freely around the pitch to find the spaces to get the ball. Unless Oscar Pareja decides to man mark Higuain (and I wouldn't recommend it), this will require a team effort and lots of communication from the back line. Just take a look at this passing charts from the last two full games he played in: 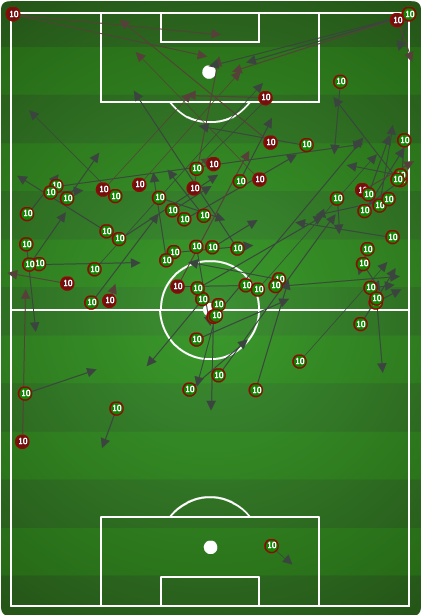 The stats are equally impressive: 59/75 (79%) passing, 2 through balls, 4 key passes and 1 assists. He did find the ball on the right hand side a tad bit more in this match, but otherwise, he's equally comfortable in receiving and making passes anywhere out there. Oh, and not even covered here are the two goals he also scored. 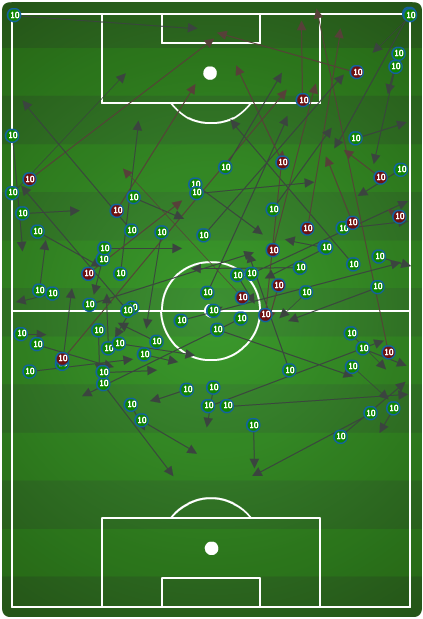 This game he had to play a little deeper than the previous and shaded more towards his left, but again his effectiveness on the pitch was equally impressive: 66/82 (80%) passing, 3 through balls, 3 key passes and 2 assists. (No goals this time.)

In both games, he led the Crew in touches and events by a landslide (134 events logged in the first game and 147 in the second). But despite being a known quantity and yet still having the ability to find the ball and do whatever he pleases, there might be a silver lining.

I purposefully left off the teams he played against the dates, but in order to find Higuain's last two games where he played a full 90, I had to go back into May - May 17th and May 24th respectively. He missed the 5/31 match due to yellow card suspension. Then he had to pull out of the 6/4 match after 44 minutes due to a hamstring injury. Did not play on 6/7 because of said hamstring injury and interestingly enough was not in the 18 for the Crew's USOC encounter against the Indy Eleven on 6/17. Most surprised because I would imagine that Crew head coach Gregg Berhalter would have wanted Higuain to get a few minutes in before jumping back in with the regular season.

Is the hamstring still bothering him? Will he have the same sharpness as he did before the suspension, injury and World Cup break took place? Time will tell, but certainly something worth looking out for on Saturday.