Still not the possession based side we were hoping for, but does it matter?

When Jurgen Klinsmann took over for Bob Bradley in 2011, there were talks of how the newly appointed United States coach would work to transform the team from the counter attacking style to a more aesthetically pleasing possession based style of play. In three years I've yet to see that style be implemented, at least not at a high level and we certainly did not see it against Ghana. Three points is still three points, but there's still plenty of room for improvement for this team.

If the USMNT continue to play Bora Ball and defend deep in their blocks, they must tidy up and control Zone 14 better. 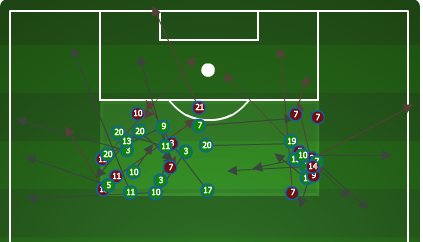 Ghana completed 23 of their 37 passes in Zone 14, along with two attempted through balls and 4 key passes. None of these led to a goal, but it's still flirting with fire and a more clinical side will surely make USA pay.

Then of course, the comparison: 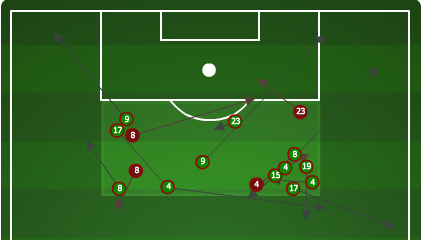 USMNT completed 12 of their 16 passes, but only 1 was a key pass and there was nothing else of significance to note.

Demarcus Beasley and Jermaine Jones had an excellent, excellent match containing Ghana's attacks down the left flank. Ghana launched 38 crosses into Tim Howard's penalty box with 29 of them coming from the left side of the USMNT defense. (Compare that to 8 that USA managed.) 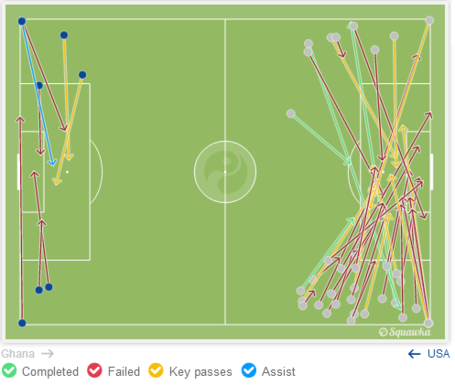 A high number of crosses usually indicates one of two things. Either the fullback is getting beat and the winger is able to get to the touchline to whip in a cross, or the fullback positioned himself well enough to force the attacker to send in a hopeful ball. Thankfully the result was the latter as Beasley delivered a standout performance.

I don't expect the USMNT to be able to win the possession battle against Portugal on Saturday, so expect more of the same: two lines of four deep, hit on the counter, rely on set pieces. It's not the prettiest soccer and certainly not what we had hoped or expected from Klinsmann's side, but as long as the points keep coming, who's complaining?