For 75 minutes Dallas found joy in their interchanging offensive weapons.

My assignment from Drew was to cover "a big talking point". The red cards and PK will probably be covered here, and it's not really something this series can cover really well, so I'm moving the discussion to something more positive: the attack and goals.

Even though the formation (4-4-2) and the personnel (Andres Escobar, Blas Perez, Tesho Akindele and Fabian Castillo) were the same from last Saturday's game against Colorado, the tactics involved were different in the way the four of them attacked the Portland Timber's goal. Escobar hugged the left flank for the night, but Perez, Akindele and Castillo were given the license to roam, interchanging positions on the fly and it resulted in two beautifully crafted goals. 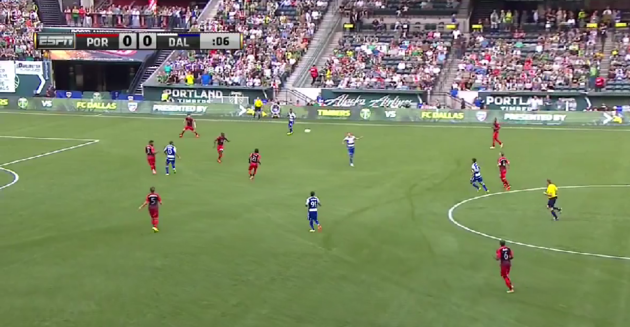 This was FC Dallas' general positioning: Escobar on the left, Akindele up top, Perez sitting in the hole and Castillo on the right. And you can see it remained the same below in the build up for Castilo's goal. 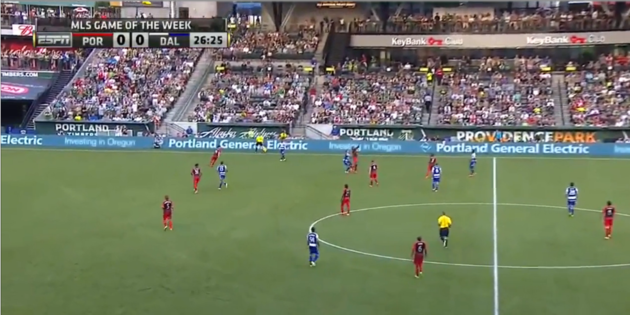 In just 8 seconds later, you can see below that Perez has now occupied the wide position and Castillo drifted inside into the space that Blas vacated.

Here's the movement in gif form to right before Blas' chips the ball to Castillo:

Everyone does their job really well here, especially Akindele who's back to goal game has been really impressive as of late. Tesho checks back to the ball and does a good job of holding the defender off to lay the ball off to Perez. Then Castillo does an excellent job of running off Will Johnson's back after his pass, making it just a tad bit more difficult and also giving him an extra second to make his run to goal.

Then of course there was the second goal which started with Akindele's run down the right flank, then the dummy by Castillo and the wonder finish from Perez. 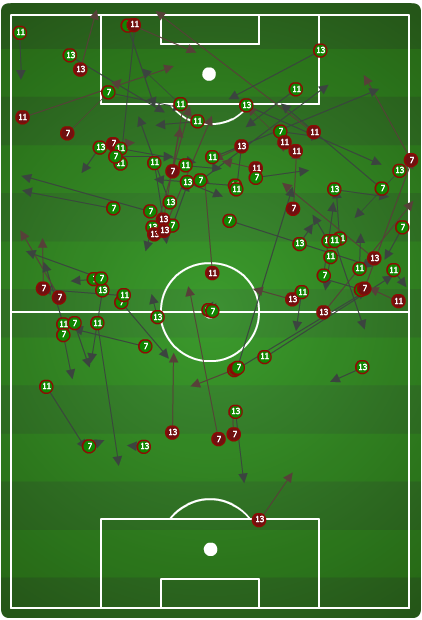 This is passing chart from all three players last night. The thing to note is where they're collecting the ball on the field and making their passes and that is all over the place. The interchanging play between the three attackers is difficult to pull off and requires a lot of discipline and communication. This tactical style actually favors Blas and his style the most as he frequently has no qualms about tracking back to win the ball the back, even if that means vacating his central striker position and dropping all the way down the left flank just to cover for a teammate.

Best part was the trio went 22/34 in passing in the final third, logged in 6 key passes and two assists. And of course, 2 goals, 5 shots on target, and 1 shot off target.

Dropping points and picking up red cards in that fashion is still unacceptable. Most of us would probably have celebrated getting a point out of this fixture, even more so when we saw the patchwork back line in the starting lineup. But when you're seconds away from taking all the spoils, this result just leaves a bad taste in your mouth.

Big picture though, the future looks amazingly bright for this team with all the youth getting meaningful minutes in these matches. On top of which Castillo looks to be reaching his full potential under the care of Oscar Pareja. This is still a dark time to be a Dallas fan, but unlike last year there's at least a silver lining coming from the youth.