Scratching the Chalkboard: 4-4-2 to Stay?

The two striker system is starting to pay off for Dallas. Should Dallas keep it until Mauro Diaz is healthy again?

Share All sharing options for: Scratching the Chalkboard: 4-4-2 to Stay?

Finally. Three points. Three goals. And plenty of smiles on the faces of the coaches, players and fans. Oscare Pareja has started rolling out a 4-4-2 in the past three matches and has gotten FC Dallas a 1-1-1 record against Real Salt Lake (draw), San Jose Earthquakes (loss) and most recently against the Colorado Rapids (win).

It's in this three game stretch during the winless month of May that Dallas finally looked the part of competing for points in this league again. Without playmaker Mauro Diaz available to pull the strings, could Dallas rely on a two striker partnership between Blas Perez and Tesho Akindele to return the Hoops back to their winning ways? 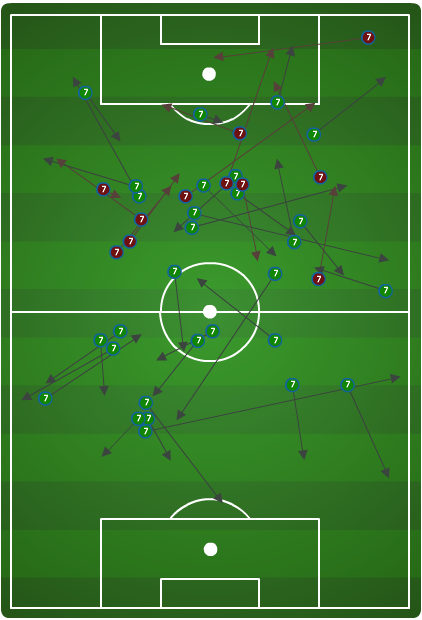 When not having the players around him to serve up balls for him, Blas Perez is then best utilized by having him help create for others in the attack. The best read from this passing chart is simply the volume of passes and touches Blas got last Saturday night. 40 passing attempts is the most the Panamanian striker has attempted in 2014. 11 of which were headers indicating that Dallas went with a more direct route of sending balls towards his general area and having him battle it out in the air.

This of course is only possible with Tesho Akindele playing off of Blas and trying to run onto to any flicked headers that Blas might win. With Akindele occupying the higher spaces in the attacking third, it allows for Blas to drift a little bit deeper to create problems for the Rapids center backs and isolate Akindele one on one. Here's a near perfect example (Blas didn't actually get his head onto this, but the result was the same):

A few more of these types of chances and surely Akindele will bag a few more goals for the Hoops. It's simple yet effective and in the absence of a true number 10 at the moment, this may be the best way to create scoring chances.

Last Saturday was also the first time any of us got to see what the highest paid player, Andres Escobar was capable of doing in a full match. His cameo appearances thus far have been hot and cold, mostly cold, but his speed and willingness to take players on may also thrive in this 4-4-2 set up.

After that brace in Houston (gosh that was a while ago) on 4/5, Je-Vaughn Watson has been largely anonymous in matches - barring jumping into someone's groin for a red card. His disappearing act may have more to do with the lack of Mauro Diaz feeding him the ball. Remember that goal he scored against Portland from that delicious pass from Diaz? That seems to be more of what Watson is capable of in the attack from the right wing position - running into space and relying on service. This isn't a bad thing, unless you don't have a player capable of consistently serving that kind of ball to you.

Insert Escobar. He has no problems with his back to goal and having to turn on his defender, something Watson isn't as good at. It was Escobar's direct run into the Colorado defense that drew a foul, which led to a wrongly called back offside call which Blas scored off of. These kind of direct dribbles straight at their defender from both Fabian Castillo and Escobar really pins the fullbacks and forces the defensive line to drop a little deeper, thus creating more space for the offense to take advantage of.

If Dallas can continue to find joys in the offense without a true number 10 like Diaz on the field, this formation will be a true asset for this team in the latter parts of the season. This will enable Dallas to start Diaz and take him off at the 70th minute mark to save his legs, and injury, and continue to find ways to get into the attack without being completely reliant on Super Mauro alone. This team looked so lost without Diaz, but here's to hoping they've found a way to cope even when stricken by injuries.