Earthquakes finding their creative spark on the wings this season

Random fact: Shea Salinas is a Texan. Born in Lubbock and attended Grapevine High School. (Yes, I know how to work the Wikipedia.)

Most teams find their creative playmaker in the center of the park, but no so with San Jose this season. Left winger, Shea Salinas has been their creator, operating and hugging that left flank with ease that he's been suggested for a USMNT call up after the 2014 World Cup cycle.

Like most playmakers, Salinas likes to get on the ball and often. He's been the top 2 on San Jose's action points for every game minus the one against Chivas USA on 4/26. In other words, he's going to see the ball a lot and often as the offense will run through his right foot.

Here's Salinas' chalkboard graphic on his passing in the final third against Vancouver on 5/3:

Not his best statistically, (3/19 passing) but still managed to register a key pass and 10 of those missed passes were crosses that all but one landed in a very dangerous position.

Then there's Salinas' chalkboard graphic on his passing in the final third against Colorado on 5/7:

This one stings a lot because of one certain Fabian Castillo that we have, but on top of serving up an excellent ball for his strikers, Salinas is excellent with taking defenders on. Just take a look: 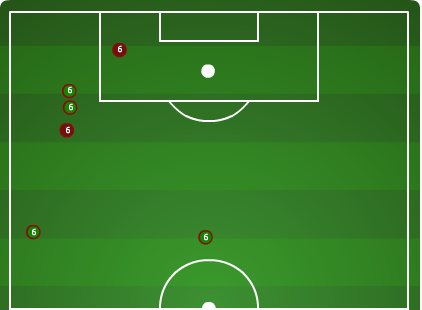 It's not just 4 successful take ons compared to 2 unsuccessful ones that makes him so dangerous, but look at where he's choosing to take the defenders on. High up the pitch and near the penalty box where he can then send in a dangerous cross. Now take a look at his last game against Colorado on 5/7: 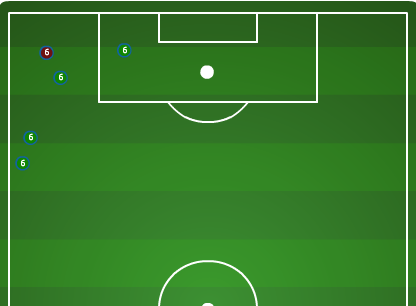 The scary one is that successful take on inside the penalty box. But again, 4 successful take ons compared to just one unsuccessful one. Even when he fails, which isn't often, he does them in a high risk reward position and doesn't put the defense under pressure.

Zach Loyd will have his hands full, but this will be a fun match up to watch. I fully expect Salinas to beat Loyd a few times on the dribble, but only to see Loyd recover well to block the incoming cross. If Dallas can contain Salinas, I like their chances for taking points from this one.