It feels a little weird to be scouting the Seattle Sounders again in such a short period of time. In all honesty, not much has changed Seattle since their visit to Frisco. They've been riding the hot hand of their offensive line and are currently on a 4 game winning streak, including that 3-2 win in Frisco back in April 12th. It's hard not to ignore the one two combo of Obafemi Martins and Clint Dempsey, who have been tearing defenses apart in the past month, but the most intriguing player to me is their new defensive midfielder, Pineda who seems to have found his footing in MLS and has Seattle's offense flying thanks to his work in the center midfield.

Seattle likes to be on the ball, so it isn't a surprise to see their players with a lot of touches and action points. What did surprise me was how often he's around the ball. His action points from the past four games:

Pineda is a bit of a tackling specialist, which is mighty impressive given he has to do it in an open field in the center of the field. Just take a look at the number of tackles he's won in the past three games. 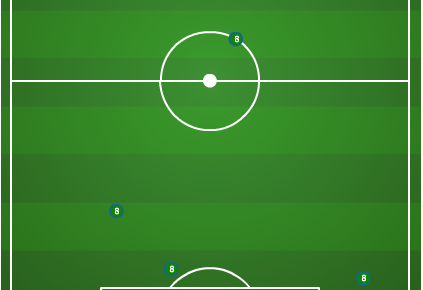 This last one against the Union is obscene as he logged in 6 tackles won. Danny Garcia will have to be careful with the ball and make sure he doesn't try too many take ons against Pineda.

Pineda's instructions are pretty simple. When inside his own half, keep possession alive by cycling the ball and move it side to side to find space. When inside the opponent's half, Martins, Dempsey, Neagle and Yedlin are instructed to make their runs and look for Pineda to spring them behind the defense.

Passing against Chivas in own half:

Passing against Colorado in own half:

Passing against Philadelphia in own half:

Contrast that with how his passing charts look in the opponent's half. 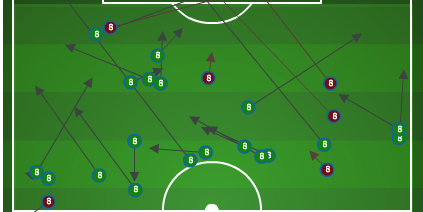 He's also good for contributing a key pass (pass leading to recipient of the ball having an attempt on goal without scoring) in every game, having picked up 5 in the past three games, which is a lot for a defensive midfielder.

Danny Garcia, Blas Perez and Adam Moffat (I'm just guessing the starting lineup) will need to maintain their shape well and make sure they don't afford Pineda much time on the ball. Even if it means they make Pineda play the ball to Alonso, who is no slouch on the ball in his own regard, Alonso doesn't create nearly as much offense for Seattle as Pineda does (0 key passes in past three games). This will especially be key as Seattle's offense is surging and FC Dallas' defense is reeling and the team will need to do every little thing possible to limit the opposition's attacking options.