You asked, therefore you shall receive

Share All sharing options for: Scratching the Chalkboard: Chris Seitz

A few of you commented on wanting a look into Chris Seitz' season thus far as FC Dallas' starter. I will fully admit that analyzing keepers from a statistical vantage point is very difficult and often misleading. I do have some data to go off of, but keep in mind that this doesn't paint a full picture and without proper context, we can't fully appreciate Seitz in goal. That being said, though I was able to dig up a few things that I think many of you will appreciate.

All in all, very solid and respectable numbers all around. There hasn't been a goal this year where anyone has a solid argument where Seitz could've been played, either by his positioning or poor handling or just plain missing the ball completely. Generally all the goals that have gone by him have been great shots and generally placed extremely well. 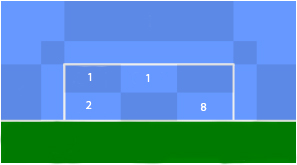 This of course doesn't paint a full picture of Seitz's abilities, but does give you an interesting look at where teams are beating him. The graphic above represents a goal and the different shades of blue represent the general area where the ball has gone in for a goal. So if you look at the top left hand corner, you'll see the number 1 up there. That simply means one goal has beaten Seitz in that general area.

*Quick note that I'm not counting own goals in this.*

As you can see for yourself, Seitz' "weak" spot, so to speak, is the bottom right corner of his goal. Without the proper context of reviewing every goal right now, it communicates to me that at least his positioning is solid. It is requiring the goal scorer to place their shots into the corner, meaning Seitz has positioned himself well to cut down the angle and to make life difficult for the shooter.

A lot of us already knew this but Chris Seitz is a quality keeper. He's definitely a starter in this league and it has been a complete luxury to have him as a backup for the past few seasons. With Raul Fernandez back from injury and doing well against NYRB this past Sunday, I'm not sure who Oscar Pareja considers his number one. But either way, Dallas is in good hands (terrible pun alert) regardless of who is named the starter.