Share All sharing options for: Scratching the Chalkboard: Danny Garcia

Before the season kicked off fans of the Hoops were a little worried at the seemingly lack of depth behind their newly minted #10, Mauro Diaz. After watching what a major injury could do to the team's offensive creator (David Ferreira) and reduce him into the shadow of his former self, one would forgive and understand the nervousness surrounding the Dallas fans without a clear player who could take over should something happen to Super Mauro. Oscar Pareja very nonchalantly addressed this by stating that Mauro's backup was the unknown Homegrown Player, Danny Garcia and that he was ready to contribute to the first team this season.

Just like his other Homegrown teammates were this season, Garcia was thrown right into the starting lineup without even logging in a single MLS minute before hand. (Moises Hernandez against Montreal on 3/8 and Victor Ulloa against Portland on 3/29.) And just like the other HGPs making their first team debut, Garcia looked very much the part of a high quality professional soccer player.

This one is a little hard to make complete sense of. Actually Danny Garcia had the second fewest action points of all the starters, save for Watson and the red card definitely changed the way Dallas attacked and used Garcia. But overall his stats were very nice and clean:

The sad thing about these graphics is that they definitely don't give you any context of the pass. What's the degree of difficulty? How much pressure was he under? Did he split defenders or nutmeg them? Did he complete a no look chip? So while Garcia didn't see the ball nearly as much as Diaz would or complete as many passes either, if you saw the game, you'd see he was more than capable of making high quality passes under a lot of pressure just like Mauro would.

**I've been trying to create a gif of that chipped pass Garcia did at 37.10 mark to a streaking Benitez but have been unsuccessful. Does anyone here know how to pull video footage from MLS Live to make gifs or just make small video files? This would've been a nice place to show off Garcia's passing skills. 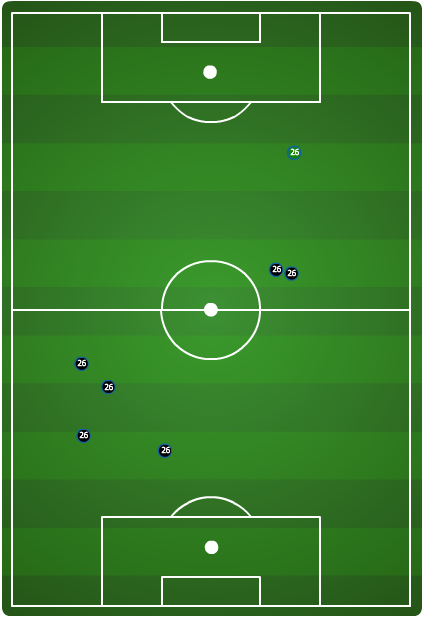 I'm not fond of seeing the center attacking mid make defensive plays that deep in their own half, but given the man advantage situation, it's good to see Garcia willing to put in the dirty work and help the team try to get a result out of this.

On any other day, Garcia would've been praised for his smarts and instincts for setting up Perez' game winning penalty. The second Castillo sprung Garcia I told my wife that he needs to get into the box quickly and look for the foul with the way Cahill was running. Sure enough, he did a fantastic job of drawing the penalty and you could tell how much it meant to him by the fist pump reaction to being awarded the penalty.

Danny Garcia was not playing at Super Mauro levels - yet - but the future does look very bright for him as he showed off his silky first touch, vision and passing abilities under very difficult circumstances. This was certainly a good game to build off of and I'm certain Seattle's Osvaldo Alonso and San Jose's Sam Cronin are making notes on how to track him.

And enough cannot be said about Oscar Pareja preparing his HGPs for their first starts. All three have jumped in and have looked the part of high caliber professional soccer players. Despite the loss, there were definitely many positives to take from this game with Danny Garcia being front and center of all of them.