Share All sharing options for: Scratching the Chalkboard: Defense Shines

It took 14 games, but FC Dallas finally was able to get that clean sheet that has inexplicably escaped them up until now. Despite throwing two new players into the starting lineup (Walker Zimmerman and Moises Hernandez), the Dallas back line looked very composed and rarely caught out of position. Part of that probably had to do with Chris Seitz being back between the sticks as he is the more vocal between him and Raul Fernandez.  And while the offense were also shut out as well, I'm sure many of us here are looking at the 0-0 result as a huge positive and a great step in the right direction. So how did Dallas shut out one of the best teams in the league? Let's go to the Chalkboard to find out.

This is simple math. If you don't let the opposition shoot, the odds of being scored own are near zero and vice versa. Now Dallas did give up more shots to Real Salt Lake throughout the game, but if you were watching it never felt like any of them had a real chance of finding the back of the net. And that's because the Dallas defense was able to limit RSL's quality chances to basically one, if you could even call it that. 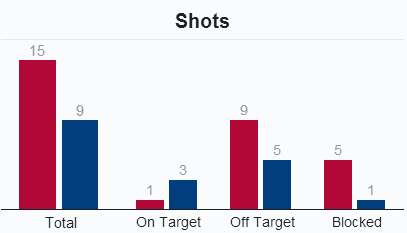 This is a little confusing, but FCD is blue in the chart above. The two big stats that stick out are the shots on target (1) and the number of shots that were blocked (5). Let's take a deeper look into how those shots were actually taken against the Dallas goal.

The Hoops defense gave up 6 shots inside the penalty box, with two of them coming right at the edge. On one hand, the positive you can take away from this is that the four right around the penalty marker are all headers coming off of corners. Indicating that it required RSL a higher degree of difficulty to muster a shot off. The negative of course is that, that means Dallas isn't winning those headers in the first place. Thankfully all four of them missed the goal by a large margin. 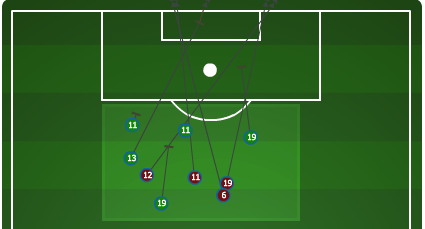 If you're going to give up shots on goal, this would be the best place to give them up as they give your keeper the most time to react and position himself. Out of these 9 shots only one was on target and 4 were blocked. The only shot that Seitz had to get his hands on was about 25-30 yards out and barely troubled him.

The starting backline of Zach Loyd, Matt Hedges, Walker Zimmerman and Moises Hernandez had a combined 10 tackles won, 3 blocks, 8 interceptions, 33 clearances, 1 blocked cross and 17 recoveries. Zach Loyd was particularly impressive with his defensive work who registered 6 tackles all on his own. 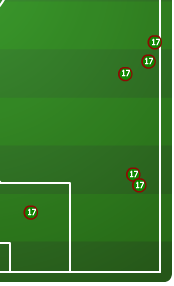 And of course there this gem:

Despite a clean sheet, there were still some mistakes made and a few things that need to be shored up. Mostly cleaning up Zone 14 and controlling that area better. 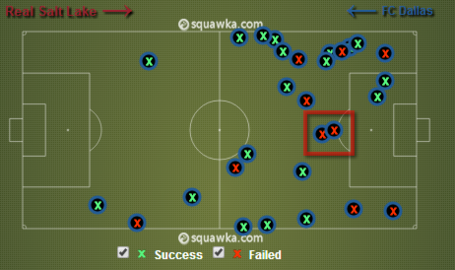 These are all the tackles won and failed during the game. Two two inside the highlighted box is the biggest concern as both Victor Ulloa and Adam Moffat failed to tackle Javier Morales in a very dangerous position. Thankfully nothing came of them as Zimmerman and Hedges were able close down the space very well and kill any offensive momentum RSL had.

This was a big point on the road for Dallas to earn. The winless streak continues (up to 7 now) but as long as FCD can continue to build on this defensive performance, the fortunes of this team change sooner rather than later. Dallas has rode on the brilliance of Diaz and Michel to get their points, now with them out, they'll need to find points from their defense.

This was probably my favorite moment of the game: Seitz just ripping into Escobar for not even challenging for a cross that was sent towards his direction in the dying seconds of the game.