Just how do you contain the Argentine?

Like a fine wine, Javier Morales has gotten better with age. His touch, vision and passing range remains one of the best in the league. Given space --or even when you don't-- Morales is capable of playing that killer pass that will lead to a goal and completely deflate your team's defense. To make it worse, if he doesn't have the ball, Morales is crafty enough to find the pockets of space to put himself into good scoring positions. All this to say, the lack of Hendry Thomas for this one will make it really difficult for Dallas to get any points from this one.

In the last two games, Morales has been sitting on top of the diamond midfield, pulling the strings for the offense while Kyle Beckerman sat beneath him to clear up any messes. 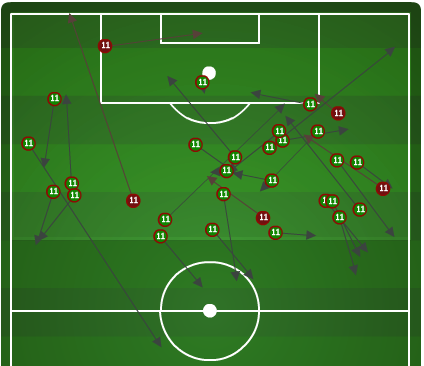 That's 26/31 in the final third, with 1 through ball, an incredible 4 key passes and one assist. Granted Houston was down to 10 men, but two of his key passes came even before the red card. This doesn't even account for the hat trick that he scored as well.

To follow up his goal scoring feat against Houston, Morales had this showing against Colorado on 5/17: 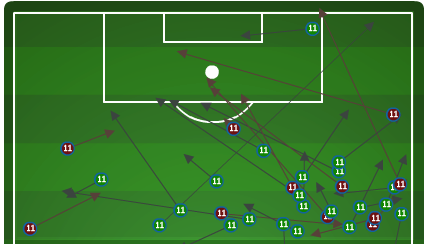 That's 21/32, 1 through ball, an astonishing 3 key passes and one assist all in the final third.

Somehow, even when close to goal Morales is able to turn on his defender and advance the ball for Real Salt Lake with relative ease and with consistency. Victor Ulloa will most likely be tasked with shadowing Morales, and Ulloa must do his best to close Morales down as quickly as possible and not let him turn. Fouling isn't much of a better option either as Morales is a skilled dead ball specialist, so it's a pick your poison type situation. The ideal will be for Ulloa to remain goal side of Morales and bait for the pass before closing that space so Morales cannot turn and force him to play the ball backwards.

And while I just wrote that it's going to be incredibly difficult to get the ball off Morales' feet, there has been a different trend with him this season. Morales isn't one of those creative midfielders who expends most or only his energy on offense. He likes to mix it up and does the dirty work of defending and tackling as well and his fouling numbers are oddly high for a player in his position.

Most creative, attacking midfielders usually suffer the most fouls as they try to dance their away around defenders, so it is no surprise that Morales leads RSL with 29 fouls suffered. But oddly enough, he also leads them with 21 fouls conceded as well. For some context, he only fouled an opponent 23 times in 29 appearances in 2013 as opposed to the 21 in 10 appearances this year.

What does this mean? Fouling is, at times, a product of being caught out of position and a last ditch type of defending. Usually it's a slower player trying to make a hard tackle against a faster player and concedes a foul in the process. Obviously Morales isn't getting any younger and may have lost a little bit of speed since last year hence the more fouls this year. If that is the case, it may be in Dallas' best interest for Ulloa, Danny Garcia, Andres Escobar and even Fabian Castillo to take Morales on in more one-on-one situations than usual to try to try to draw fouls. Morales also already had 3 yellows in 10 appearances compared to 5 in all of 2014. If Dallas can get an early yellow out of Morales, it could open up the space in the middle of the field to where RSL needs to pinch in their diamond midfield more which would result in open spaces out wide.

We've all known this for a while now, but Morales is extremely good and will pull the strings for RSL against Dallas on Saturday. This will be a great test for the Hoops' own Ulloa to match up against one of the best in the league. But if Dallas can keep him from turning towards goal and bait him into some silly fouls, there may be opportunities to exploit for Castillo and Watson on the flanks.