This is a new series we will be doing every week. I will include all the BDS team's predictions of the MLS games on the upcoming weekend. Correct prediction = 3 points awarded. Alright, let's do this thing.

[Note: FCD game predictions will come in a later post] 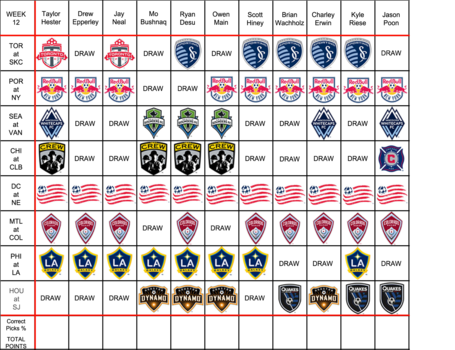 SKCvTOR - The reason I pick Toronto on the road is because they have Jermain Defoe going against a severely depleted Sporting Kansas City back line who will most likely be starting full backs at both center back positions. Doesn't bode well.

NYRBvPOR - Obviously, most agreed with me when choosing New York over Portland. Portland hasn't been off to a good start this season and New York has been hot.

VANvSEA - The battle for the Cascadia Cup returns! Always great games. Very split decision by the BDS team. Basically, I went with Vancouver because they're at home and Seattle will be missing Clint Dempsey, Deandre Yedlin. Not to mention Lamar Neagle might be in doubt to play.

CLBvCHI - Chicago has been a very inconsistent team. Columbus and Federico Higuain have been off to a good start to the season. This was easy for me to pick Columbus at home.

NEvDC - Unanimous decision by the BDS team to select New England as the winners at home against D.C. United. New England has been red hot this season and haven't lost in the past six games (5-01).

COLvMTL - Almost unanimous decision by the BDS team. Montreal probably has the worst defense in the league and Marco Di Vaio hasn't been playing. Easy pick for me to go with Colorado at home.

LAvPHI - Los Angeles is good. Really good. Now they have Landon Donovan back. Philadelphia is struggling. Plus LA is at home. Easy pick for me.

SJvHOU - Houston struggles without Brad Davis. A lot. But who will score for San Jose while Chris Wondolowski is out? I have a feeling this will be a 0-0 draw.