As much as I hate silver linings and moral victories in the midst of a six-game winless streak, there are actually positives to take away from this stretch of bad luck. During the 2013 winless streak that went throughout the summer, many of us here were clamoring for Schellas Hyndman to get minutes to the younger players. At that point the veterans were not getting it done and if FC Dallas wasn't getting any points, at least get playing experience for the future.

Obviously injuries have played a big part in forcing Oscar Pareja's hand in shuffling the lineup, but in this six-game winless stretch, Papi has already given the younger players plenty more minutes than Schellas did in 2013 for that 13 game stretch. 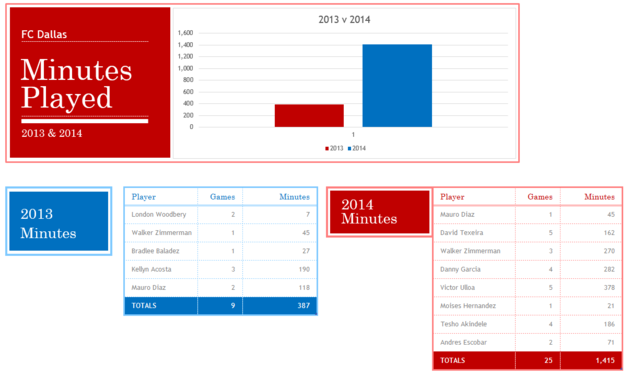 *I only took into account first and second year players in the league and HGPs in these numbers.

**And sorry for the size. I'm still figuring out how to make it bigger.

The magic that is Mauro Diaz has made many of us forget that this would have been a rebuilding year for the Hoops. His injury, along with George John and Hendry Thomas have rocked the spine of this team and there isn't a team in this league that could handle losing three key pieces like that and still maintain their winning form. But the promising outlook here is all the minutes and experience the younger players are getting now. This will continue to look rough for the next few weeks, but the outlook for next year and the next is looking very bright.