What should we make of Adam Moffat so far?

Share All sharing options for: Scratching the Chalkboard: The Adam Moffat Quandary

At the beginning of the season, it was really clear that the recently acquired Hendry Thomas and Adam Moffat were to be the bite and muscle in the midfield that Dallas has lacked since the retirement of former captain Daniel Hernandez. Unfortunately for the Dallas faithful, Moffat's been marred with injuries, and lackluster performances to date and as a commentator made note of, Moffat is dangerously becoming the 2014 version of Je-Vaugn Watson - bearing all the weight of scorn and disdain from the fans. Perhaps my perception is off, but it feels like every mistake Moffat makes is amplified more than it really is. So what's the deal? Let's take a look. 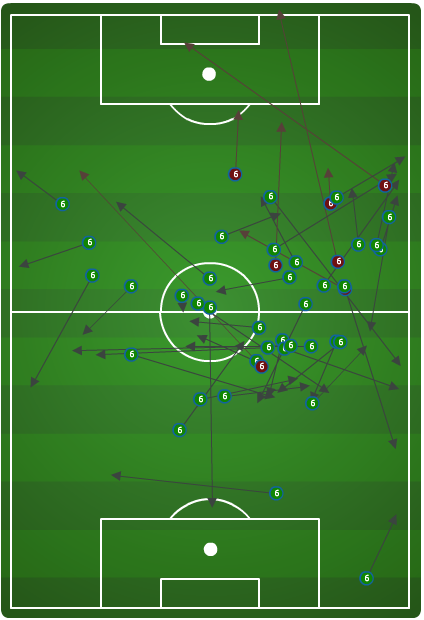 37/43 against Chivas last weekend in 64 minutes of work. 4 of his misses were chipped passes covering a good distance, and one was a headed pass. So it's not that he's entirely sloppy with the ball. In fact, his whole body of work thus far has been respectable: 136/176 for 77% passing accuracy. He's not setting the world on fire, but he's not terrible either.

The cost of acquisition is probably what's putting Moffat under higher expectations than normal. As if it wasn't bad enough that fan favorite Kenny Cooper was traded for Moffat, along with allocation money, but it had to be Cooper who scored a late winner against Dallas for the only game Moffat has started and finished (more on that later). Now it isn't his fault that the front office made this deal, but that is the reality of it and like it or not, he'll also be compared to Cooper to some degree.

At the time, the deal seemed to make a lot of sense. Kenny Cooper had an enormous contract, wasn't scoring that much (only 6 goals last season) but was played out position, and the central midfield was in a big need of an upgrade. The issue now is that Moffat isn't an upgrade to what Dallas currently has on their roster.

Comparing Moffat to last year's central midfielder incumbent, Andrew Jacobson and there's not really much of a difference.

Just overall depressing to give up a goal scorer for a player that's just about the same as what the team already had. Making matters worse is that Dallas is now having trouble scoring goals during their 5 game winless drought (scoring only 4 goals during that span).

Lacking Fitness or Ability to Contribute?

When digging up stats on Moffat, the most troublesome statistic for me was his appearances for the club so far. He has made a total of 7 appearance for the team with 4 starts to his name. His record when he starts is 1-1-2, but in that lone win, he lasted only 11 minutes and it was against Chivas on 3/22. And lastly (which I touched on earlier), he has only played a full 90 once so far and has been taken off for injury or subbed off by Oscar Pareja.

I cannot tell for certain why he's being subbed off each time. Some of it he looks gassed and sometimes Papi wants a different look out there. Compare this to Victor Ulloa who in his four starts  was subbed off only once (against POR on 3/29) but even then Ulloa went 87 minutes.

Moffat needs to distinguish himself somehow. His "Moffat Rocket" shot has yet to make an appearance. His passing is fine, nothing noticeably different from the others. His defensive presence is average as Thomas has claimed that destroyer role. Until he starts contributing more to the team, I'm starting to feel he is more the 2014 version of Eric Hassli: dead weight and a surplus of resources.