World Cup snubs show why they should be going, updates on Kaka and Didier Drogba, and more.

FC Dallas ended their four-game losing streak after tying Chivas USA 1-1 at home Saturday. Let's take a look at what else is happening around MLS.

Jermain Defoe, Eddie Johnson, and Obafemi Martins will not be playing for their countries in the World Cup this summer. I don't think they took it lightly. Last weekend, each one of them showed why they should be.

Jermain Defoe is probably the biggest snub of all MLS players. It's understandable why England didn't decide to take him. First, he made the switch from Tottenham of the Barclays Premier League to Toronto FC of MLS. Second, and more then likely the reason why he was left off, he has been injured. But, in his second game back from injury, and only his fifth MLS game, Defoe scored and lead Toronto to victory against New York. He now has four goals in five games.

When Jurgen Klinsmann left Eddie Johnson off the U.S. Men's National Team preliminary World Cup squad, many were shocked, including me. He was such an integral part of World Cup qualifying and is such a versatile player. I thought he would likely be lock. But he was left off the roster. I understand why though. He has yet to impress after making the switch from Seattle to D.C. United in the off season. But, he lead DC to a 1-1 tie against Montreal after scoring his first goal of the season.

Obafemi Martins was left off the Nigeria provisional World Cup squad. I don't know if he should be going to the World Cup, but with the run of form he has been in this season in MLS, I thought he would at least make the preliminary roster. Martins scored a stunning goal a in 1-0 win against a depleted San Jose side this past weekend. He now has five goals and six assists. His contribution has Seattle sitting atop the MLS table.

Look for these guys to continue to impress the next month or so as the thought of being snubbed lingers in the back of their minds.

Well, it looks like Orlando City won't get their man just yet. Reports have surfaced that suggest Kaka will remain at AC Milan next season.

However, this doesn't mean he won't play for Orlando in their inaugural 2015 MLS season. Kaka is under contract until June 2015, which means he can sign as a free agent and join Orlando for the rest of the season.

Didier Drogba has long been linked to MLS. Start the transfer rumors again. Drogba has confirmed he will be leaving Galatasaray after sharing his news on the club's official TV Channel, via Goal.com.

So, where will he end up? He has been linked to a return to Chelsea, shockingly to Liverpool, and of course to Seattle numerous times. Will he finally come to MLS? Time will tell.

The game to watch (other than FCD games) is Seattle at Vancouver.

This game should be intense. The battle for the Cascadia Cup returns. Obafemi Martins is hungry to prove himself after being snubbed. Pedro Morales has the Whitecaps looking dangerous. You don't want to miss this. 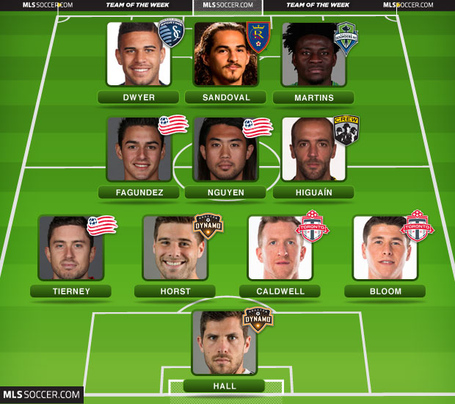 Federico Higuain was named Player of the Week.

Vote Raul Fernandez for Save of the Week here.